Friday, January 23, was a red letter day in the annals of Bryan history.  It shall always be remembered as the day the Zook had the antennae removed from her toes and lost her singular ability to receive both Coast Guard and police band distress calls . . .

There are many fine dining spots to be found off Duval Street if you take the time to get away from the crowds and cruise through the neighborhoods.  Some, like Abbondanza, are located in converted houses within these residential areas while others like Blue Heaven are completely surrounded by rain forest . . .

While wandering through the rows of crypts and monuments you obtain a greater awareness of the gregarious nature of the local residents through some of their tombstone inscriptions . . . 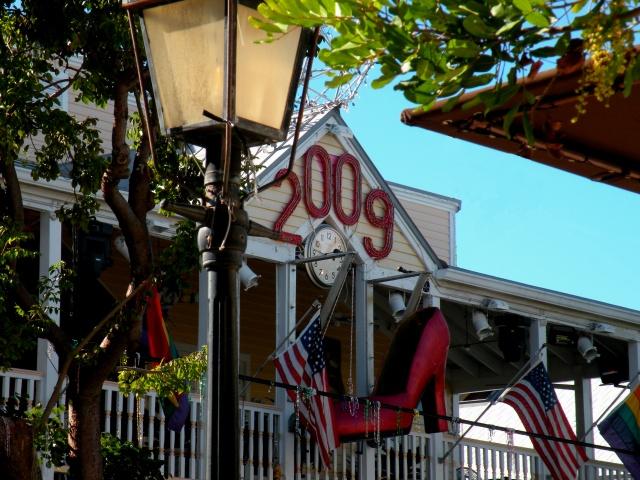 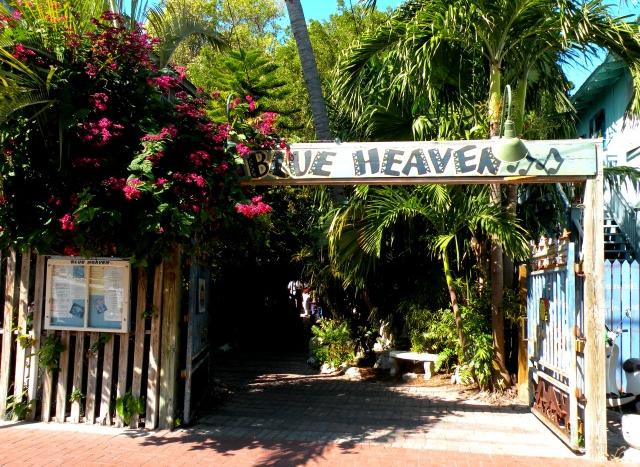 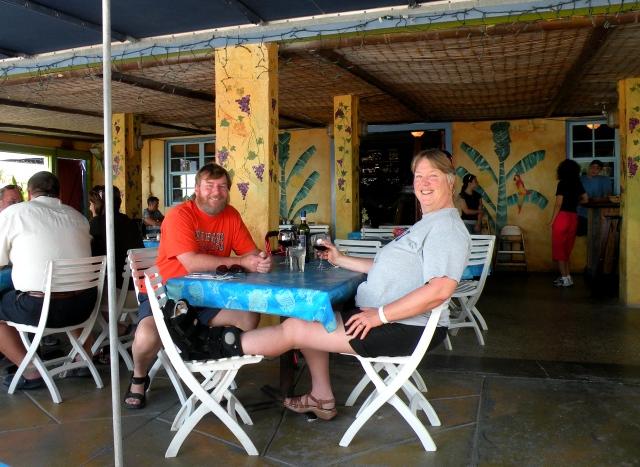 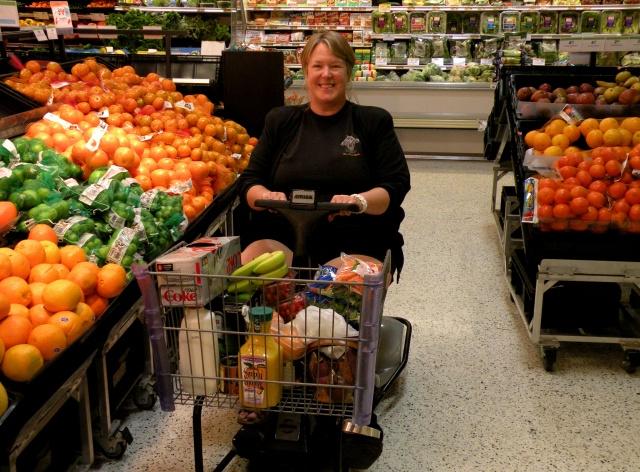 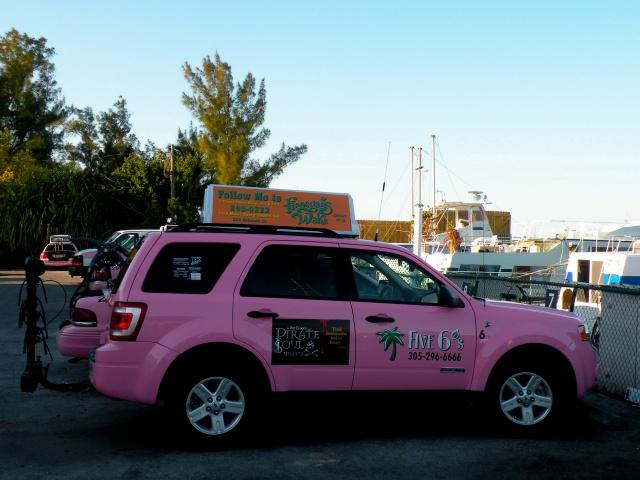 What do you imagine that road crew was thinking as they installed this assortment of signs?  Those located above ground here also live in a manner a bit different from what you may encounter in the Midwest.  This is what Conch Republicans refer to as tract housing . . . 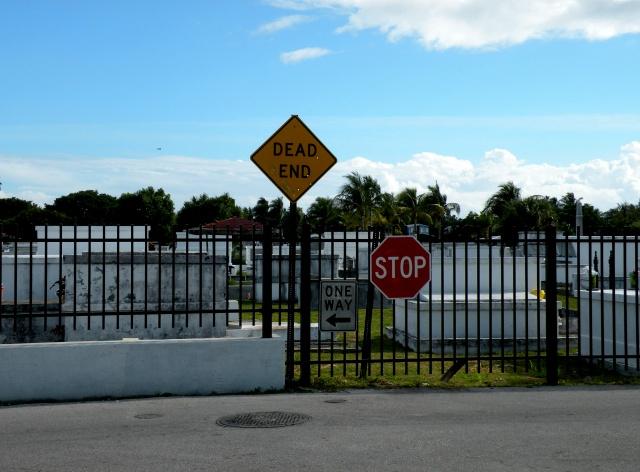 The primary drawback I can envision with this living arrangement is the possibility that your home might relocate to Cuba during hurricane season, or merely a high tide.  ¿¿Habla usted Español??  Many prominent people have called Key West “home” through the years.  Ernest Hemingway moved here after departing Cuba, raised a small army of 6-toed cats and kept many of the local saloons and gambling halls profitable.  Tennessee Williams, who also spent some time in the Keys, was noted for taking friends out to dinner and paying for their entire meal with a check.  Many of his checks went un-cashed as the restaurateurs saved them for the autograph and thereby provided Williams and his group with many free meals.  Not the least of the dignitaries who enjoyed island life was President Harry Truman whose home here, during his term of office, was known as “The Little White House” . . .

Not yet identified, she is often seen caroming about the island on a purloined electric grocery cart full of hand made bracelets which she gives away to passersby.  Although known for her benevolence, she has become a first rate menace to both pedestrian and vehicular traffic alike and has become the target of several city council resolutions and a grassroots bumper sticker campaign: “BANISH THE BRACELET BROAD.”  Duffy’s Steak and Lobster House on Truman Avenue is one of a number of picturesque Caribbean-style establishments so prevalent in KW . . . 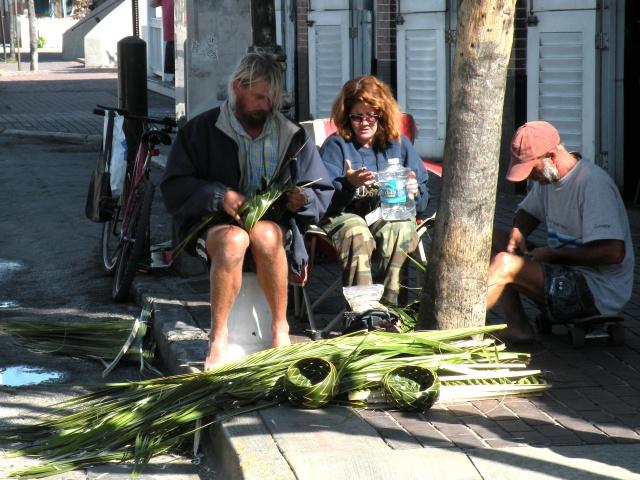 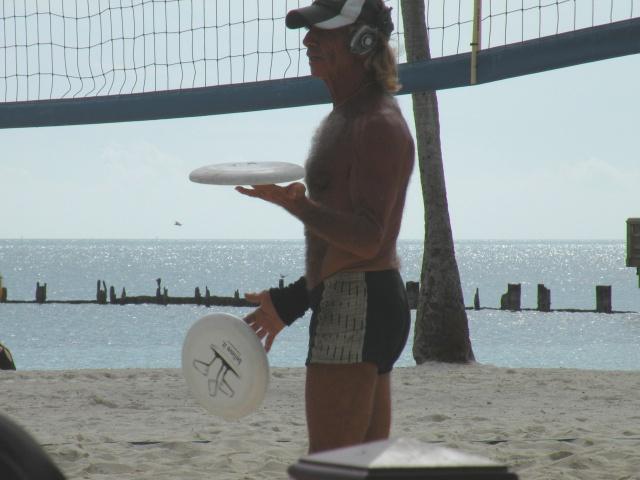 Their usual hangout is a street corner near Sloppy Joe’s where they weave baskets and hats from palm fronds and then sell their wares to the throng of tourists prowling Duval Street.  One of the more peculiar and controversial characters you might run into is The Bracelet Lady . . . 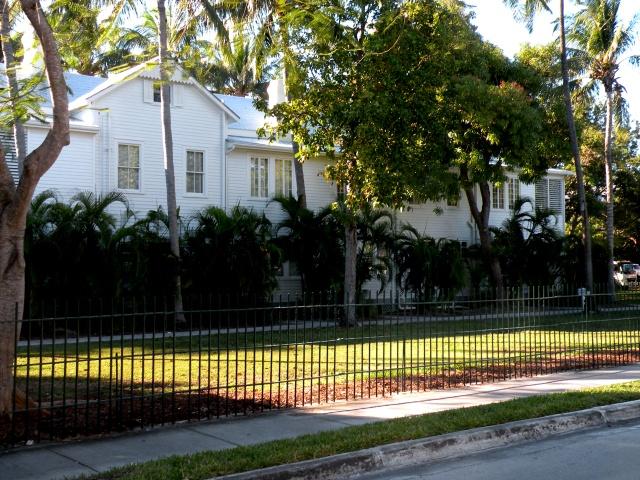 Much of the construction here, both residential and commercial, consists of this open design and the use of an abundance of wood as well as interior courtyards of the type found in New Orleans . . .

This fellow was a well known hypochondriac who, not unlike Felix Unger, is said to have complained continually about an assortment of mythical ailments.  It would appear that Mr. Roberts has had the last word.  You somehow get the impression that this cavalier view of death is not limited merely to those residing within the cemetery walls . . .

This day will also be mourned as the day she lost all legitimate claims to the many perks of handicapism . . . 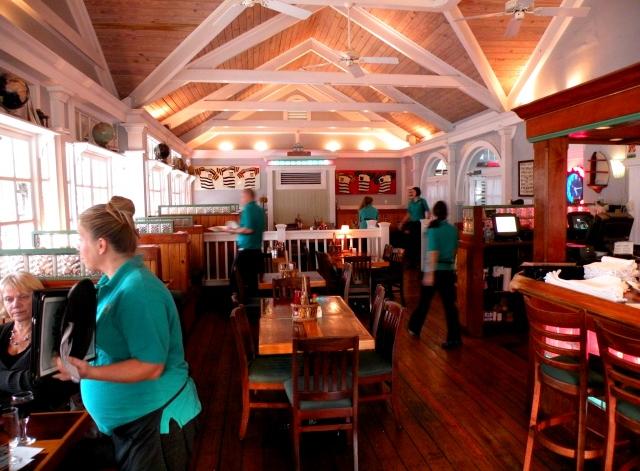 Okay, so this may not be what you had in mind.  There are many interesting one-of-a-kind people in KW and this guy is simply known as The Frisbee Dude.  He rides around the island on a bicycle with a backpack loaded with Frisbees and ends up on the beach in front of Saluté every day for several hours tossing them from one of the elevated picnic enclosures into a volleyball net.   He is never without his trademark radio headset.  These folks, meanwhile, form what is locally known as The Basket Bunch . . .

Truman was President during a time that I believe the job might actually have had some fun moments as he often slipped away from his Secret Service detail during the night to enjoy a few libations and small talk with the patrons of Pepe’s Cafe on Caroline Street.  There is a slogan among the bar crowd here in the Conch Republic, “When you drink, think pink”. . .

KW is not really known for its beaches but there is a beautiful white sand beach as well as a few nice eateries to be found along South Roosevelt Street . . . 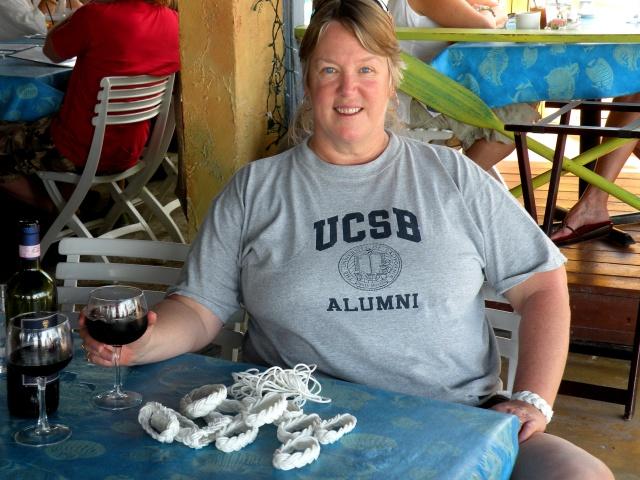 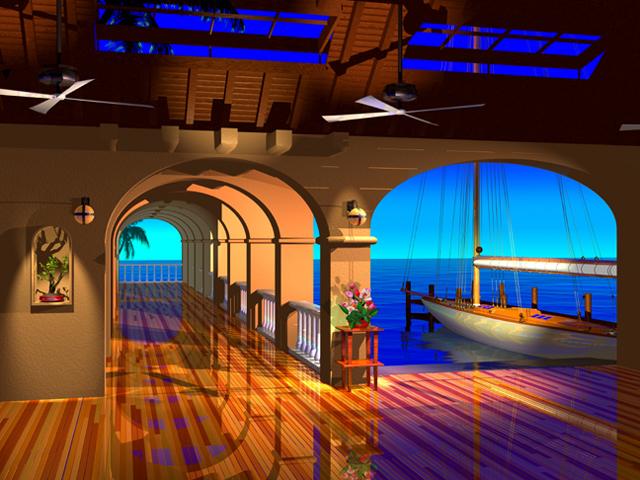 As the hour approaches, the Ruby Slipper, containing a drag queen in full formal attire, spraying champagne into the gathered crowd, is slowly lowered to Duval Street in front of the Bourbon Street Pub.  We missed this year’s event due to our surgical gambit but already have plans to return next year to join the locals in welcoming 2010 in true Key West fashion!  The one event we haven’t missed this year is also one of our favorites . . .

These taxis descend on Duval Street tourists every evening like a camp of bats emerging from Carlsbad Caverns in search of insects.  As you may have noticed, they are pretty easy to spot.  We are now well on our journey into 2009 and the New Year was welcomed here in a way somewhat different than watching a lighted ball in Times Square . . . 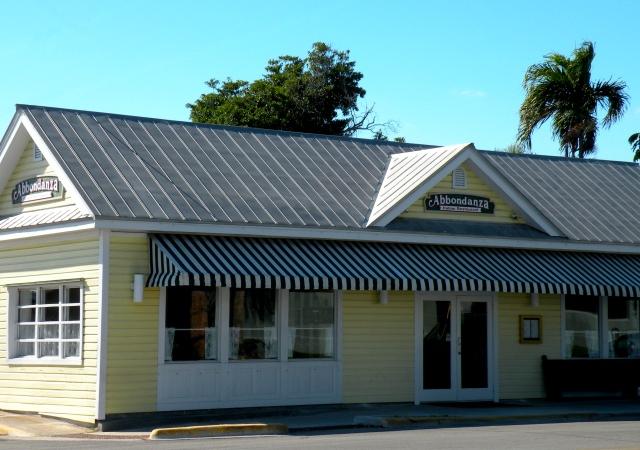 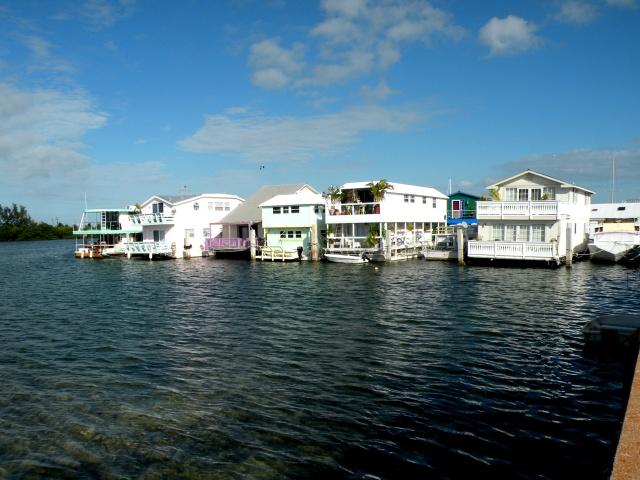 This painting, among others by Stephen Harlan can be viewed in the restaurant at Hurricane Joes.  Another of the similarities shared by the Conch Republic and The Big Easy are the above ground cemeteries . . . 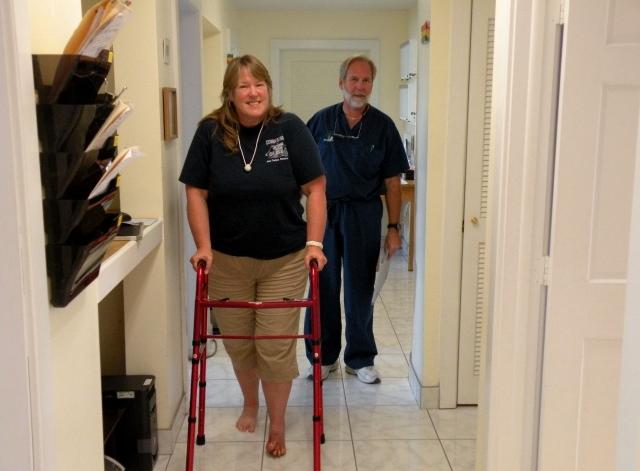 It’s Groundhog Day!!!!!  With so much of the country now suffering the effects of runaway global warming, this critter’s weather prediction has gained newfound interest from a lot of folks who never paid him any attention in years past.  Here in Key West the average winter temperature is about 80 degrees and six more weeks of the same wouldn’t bother us a bit.  So cuddle up and stop by here again next month for another plunge down the rabbit hole.  Hugs, Chuck and Gimpy

NOTE: We are currently updating our list of folks who receive a link as each new Update is published.  If you wish to be either included or excluded please drop us a note with your e-mail address.  Thanks!! 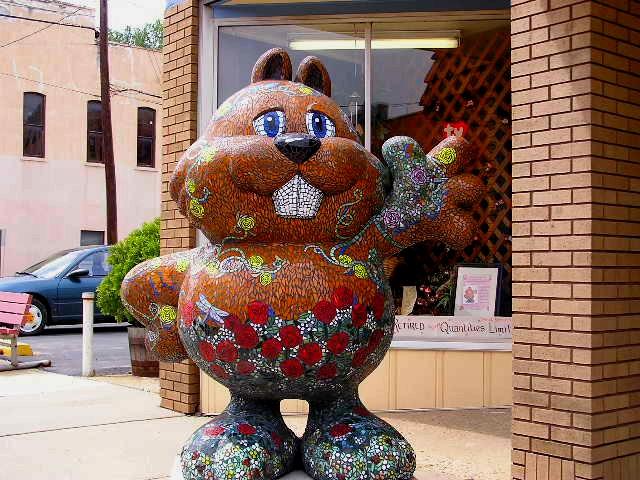 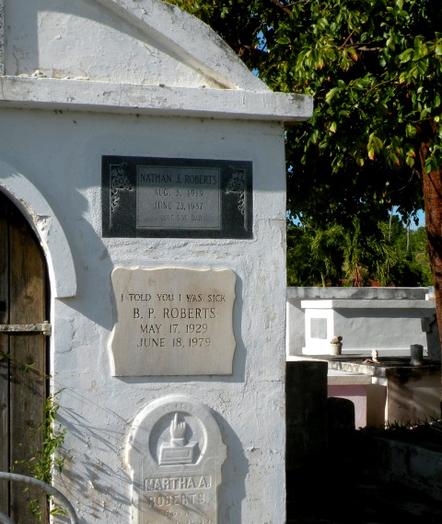 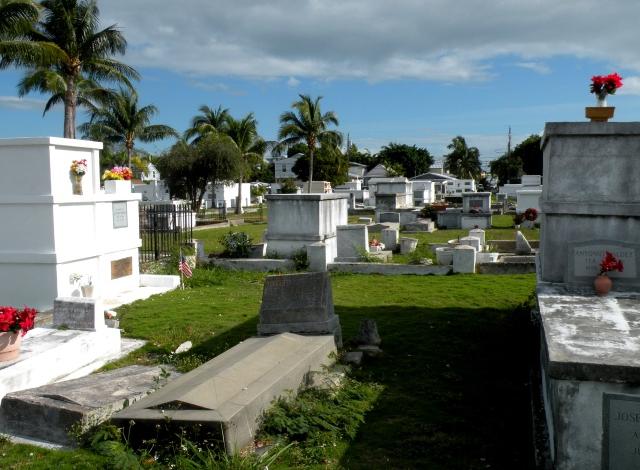 This one, Saluté, very similar to The Soggy Peso in Mexico, is situated beachside and provides an excellent perch for sipping wine and observing beach bunnies . . .

I, for one, will not miss seeing her plow through grocery stores at breakneck speed, terrorizing other shoppers, mowing down displays and all the while yelling, “Watch out!!  Handicapped person coming through!!”  The doctor still wants her to take it easy for a week and continue to use both "das boot" and her walker.  He only removed the pins this week, instead of next, after she promised to be good and not engage in any daredevil antics on her bicycle for at least another week.  I know she would have promised anything to have those pins removed and finally be able to wash her foot.  You would not believe how incredibly odoriferous a confined space, such as a motorhome, can become after 5 weeks of housing an unwashed foot.  I have spent a small fortune on those little cardboard Christmas tree air fresheners during this ordeal and have several hundred of them inconspicuously placed throughout our home.  The worst part of this entire adventure has been our forced confinement due to her need to keep her foot elevated so as to reduce the level of pain that develops when she leaves it at floor level for any length of time.  But she has been a real trooper, seldom complaining (HAH!!!), and would occasionally, after only a minimal regimen of pleading and maniacal hysterics from me consent to visit one of the many tremendous restaurants which are found in Key West . . .