The entire Rocky Mountain area just abounds in wildlife of all sorts.   We then spent a couple of days in Denver enduring throngs of Denver Bronco fans wherever we happened to be.   These folks are even more fanatical then Oakland Raiders fans!!  Using Denver as a base, we took the Jeep into Rocky Mountain National Park to take a peek at the changing colors of the golden Aspen trees.   We took lots of pictures but this is one sight that just cannot be adequately captured on film . . .

We did have a close encounter with one of the legendary indigenous creatures of the high country en-route to the bottom . . . 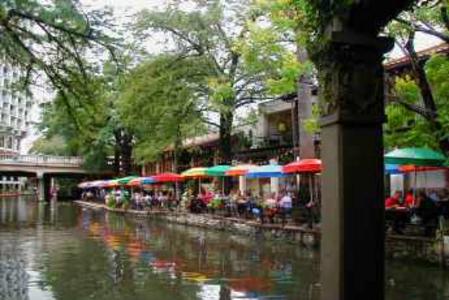 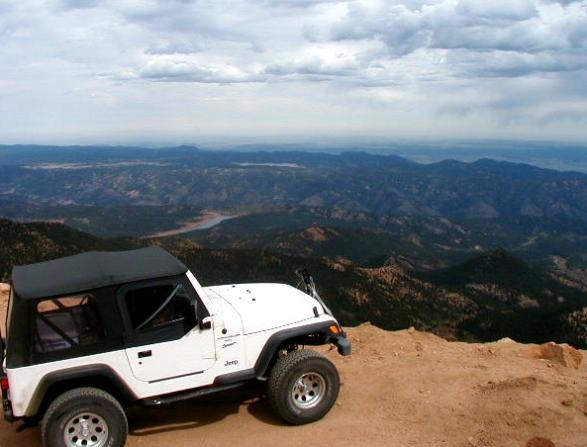 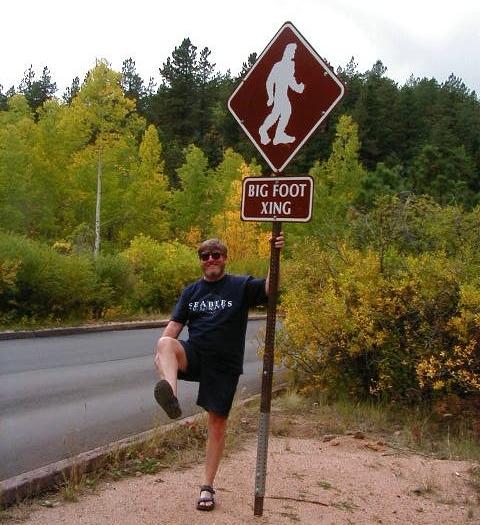 It’s great to be able to run naked through the countryside again.  Until next time, hugs and smooches.  Chuck and Zookie

The contrast between the bright red and gold coloration of the Aspen trees against a backdrop of evergreens, streams and the rocky terrain is both awe inspiring and breathtaking.   Every bend in the road opens upon a scene more sensational than the last one.   We stayed a couple of days in Colorado Springs and experienced the thrill of suicide by suffocation when we drove to the top of Pikes Peak.   At 14,110 feet there is nary a breath of air to be had for love nor money.   Actually, the gift shop atop the mountain was selling designer oxygen at $7 for 6 minutes worth.   They offered a choice of flavors including apple, grape, chocolate and a host of others.   We decided to jump in the Jeep and head back down the mountain while we were still conscious . . . 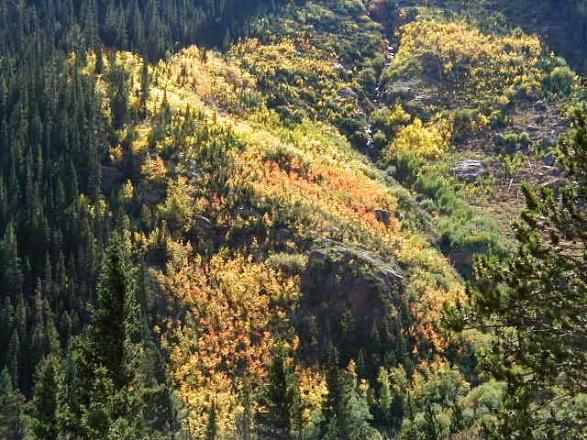 I have yet to encounter any obstacle that can’t be overcome by her Norwegian determination to save a buck.   By the end of September the weather was turning cold and snow began to blanket the mountains around us, so we packed up and headed south through the Oklahoma and Texas panhandles dodging thunderstorms, cloudbursts and tornados until arriving today to the beautiful, clear and warm weather (95 degrees) of San Antonio, Texas.

Back in Texas!!  Yup!  We are now in San Antonio and plan to hang around here for about a week before spending a month in south Texas along the Rio Grande.   Prior to leaving Wyoming, we stopped by the Three Trails Museum in Casper.   The museum is dedicated to the 3 primary trails that travelers from the east used in the western migration and is rich in historical presentations as well as many artifacts from that period of our early history.  You would think that after being inundated with all that cultural stuff we would pass along some really neat historical facts, but that’s not our style.  So, instead, here is a neat picture of a herd of antelope that was grazing in front of the place . . .

Fortunately, this one was rather old, fat and out of shape and unable to stay with the Jeep.  A few days later we went for another day trip out of Pueblo, Colorado, to visit Royal Gorge.   Our plan was to drive across the “famous” Royal Gorge Bridge and take a different route back to Pueblo.   Little did we know that the “famous” bridge is in an amusement park out in the middle of nowhere and they want $18 per person to get in!!   It wasn’t until after this misadventure that we discovered the local folks call the place “Royal Gouge.”   My thrifty bride nearly tossed me off the mountainside when I began showing signs of weakness by suggesting we pay the fee since we drove 100 miles to see the thing.   Instead, she shinnied up a tree, dropped over an electrified chain link fence laced with barbed wire and shared a 6-inch wide ledge with 2 buzzards 1200 feet above the river to snap this picture of the bridge . . . 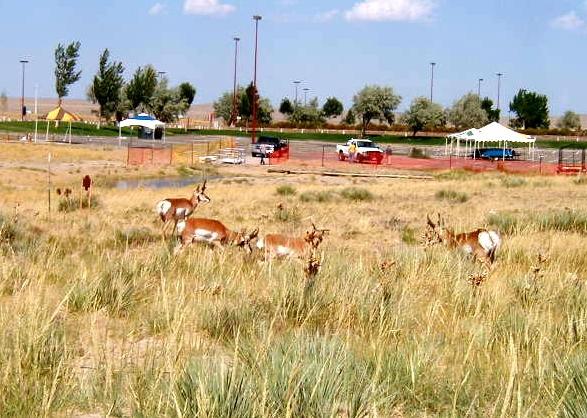 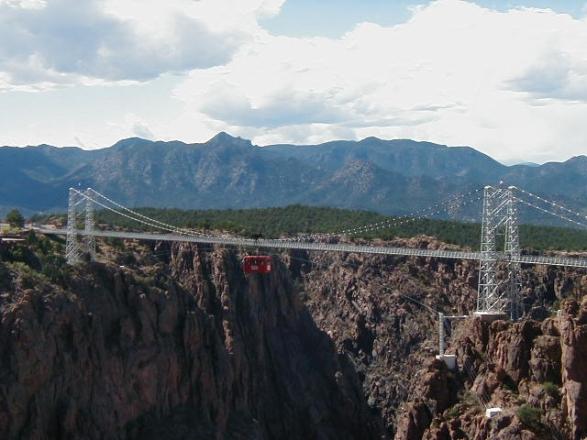