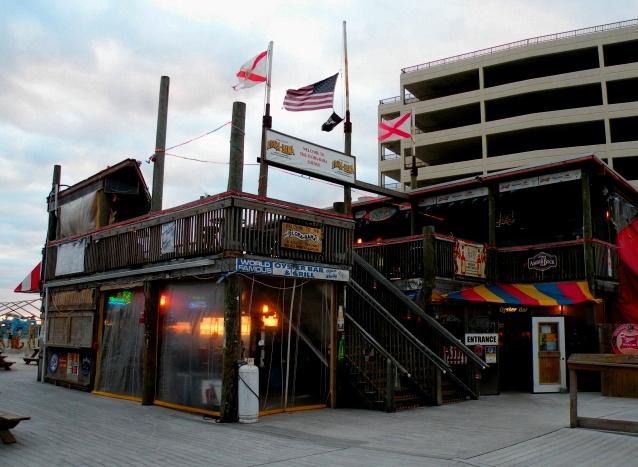 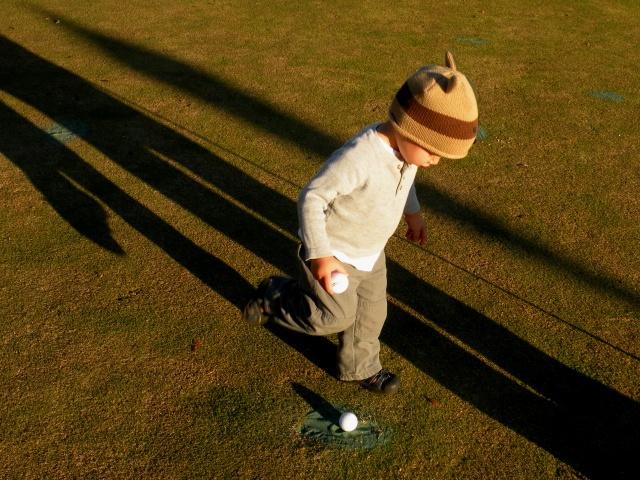 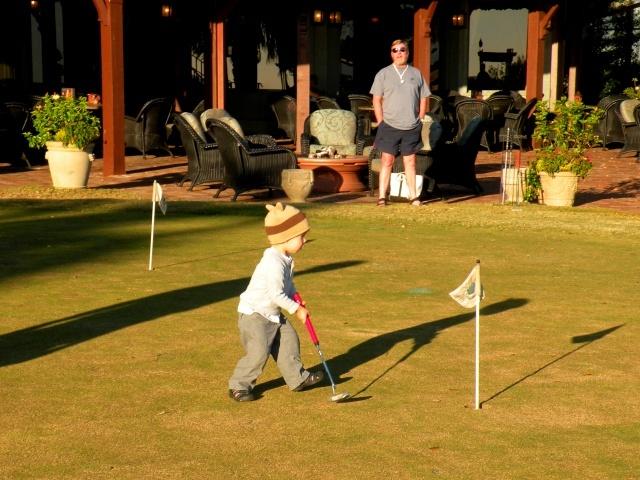 As often as we have been to this place we have never actually witnessed a “donation” being made. Just bad timing I guess.   Another building that has been pummeled over the years by a succession of storms is the Fairhope Yacht Club . . .

Many of the fields have already been picked but there are still a few with bolls that have yet to open . . . 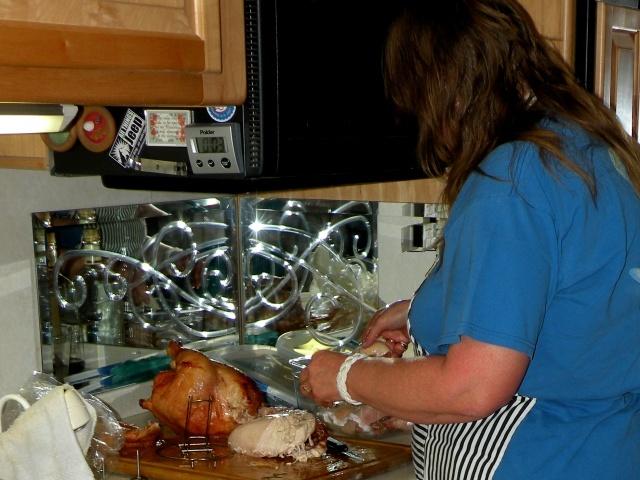 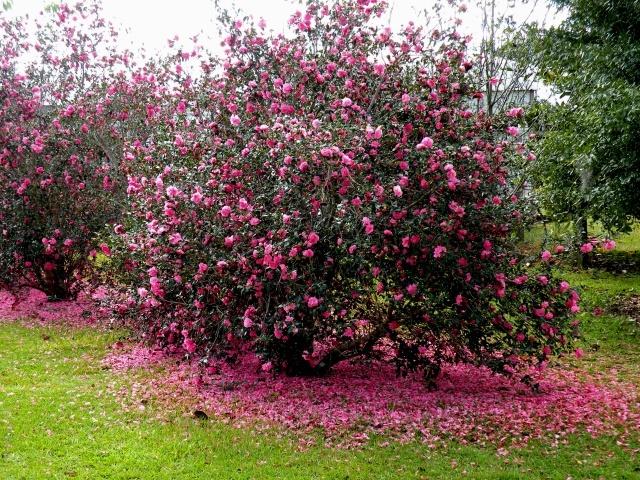 My bride was so enraptured in reclaiming her nest that she got lost in the moment and actually prepared dinner one evening . . .

I may have to trap her in a hotel more often!   After departing Red Bay, we stopped off at the Elks Lodge in Tuscaloosa for a couple of days.   As it happened, the University of Alabama had a game scheduled that weekend with archrival Tennessee and by Thursday afternoon football fans from both states were arriving in droves.   We decided to get out of town ahead of the throngs heading for Saturday’s game a stone’s throw from our encampment but experienced a minor setback in our escape when the serpentine belt broke and our engine began overheating.   We were fortunate that this happened pretty close to a diesel repair shop and they were able to replace the belt and get us back on the road again in just a couple of hours for $112.   The same repair job in California would probably cost 5 times that amount.   You gotta love the South!   Another thing we really love about this part of the world is southern manners and hospitality.   Everyone, regardless of age, says “Yes, sir” or “No, sir” “Please” and “Thank you.”   People you pass on the street nearly always look you in the eye and say “Hello”  “Good morning”  “Good evening” or greet you in some other pleasant manner.   Except for the one old lady we passed on a sidewalk in Vicksburg, Mississippi who looked us straight in the eye and said, “Well, y’all must be damn Yankees!!”   In defense of that bundled up Vicksburg Belle, we were exploring the streets of the historic district in our usual attire of t-shirts, shorts and sandals on a December day that had yet to break the 40 degree threshold.   I suppose we really did look like a couple of damn Yankees.   And the word “Yankee” is always preceded by “damn” when you’re south of the Mason-Dixon Line.   We finally arrived at the Escapees RV Park in Summerdale, Alabama and settled in for a two month stay prior to heading to New Orleans for the winter.  (Are you ready for us, Ronnie?)   As luck would have it, we arrived just in time for Hurricane Ida.   There are two constants with hurricanes on the Alabama coast: they are nasty and some piece of the Flora-Bama always gets knocked down . . . 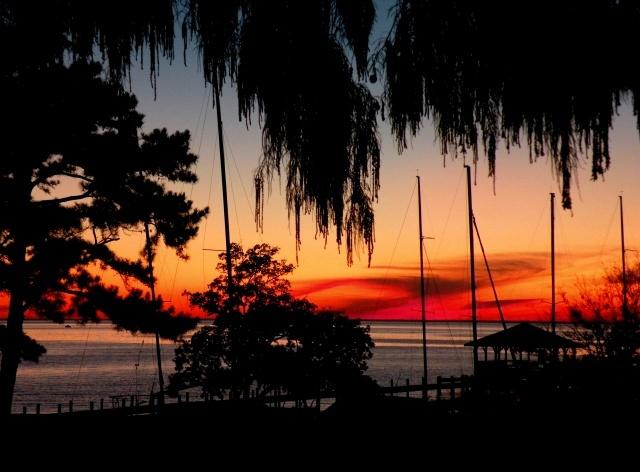 Have you ever HAD to live in a hotel for an extended period?  During our recent round of motorhome repairs we spent two weeks with maid service, evening bed turn downs complete with chocolate on our pillows (tuff stuff to get out of your hair in the morning), complimentary afternoon wine and hors d'oeuvres, lobsteresque dips in the hot tub and restaurant meals each and every day.  It was HELL!!!!   We have never been so happy to return to our own digs, our own bed and a tuna sandwich washed down with a cold glass of milk.   Now THIS is heaven!   We now have a new basement floor, new holding tanks and toilet and, of course, a new wood floor . . .

The homeowner is applying for FEMA funds to help with the cleanup.   The really good news about Ida is she didn’t damage the Gulf Coast oyster fishery and the local oystermen and raw bars are still going strong . . .

We always enjoy spending time here with our fellow yachties (okay, we aren’t true yachties any longer but we do own a land yacht now!).   Besides, the FYC has a beautiful bar and they make the best Bushwhackers on the Gulf Coast . . .

Additionally, he claims there is no shame in bombarding someone who is putting with an endless volley of “knock-knock” jokes . . .

My bride attempted this technique but was unable to pull it off without the fuzzy-eared cap.  Having honed my short game to near perfection, I think I am now ready to head to the Old Course in Saint Andrews, Scotland, and kick butt in the Rush Limbaugh Invitational!   Alabama was the first state to designate Christmas as a legal holiday back in 1836 and the first state to institute the 911 emergency system in 1968.   The state motto was once “Heart of Dixie” until the politically offensive crowd managed to get it changed to “Stars Fell on Alabama,” whatever the hell that’s supposed to mean.   But remnants of the old south can still be found in an area where cotton was once King . . .

This biker bar is situated on the beach between a couple of high rise condos and looks to have been cobbled together as some kind of temporary shelter by street people using old refrigerator boxes and Gorilla Tape.   They do, however, have a pretty impressive collection of antiquities adorning the walls and ceilings of their tented add-on which they affectionately call the Flora-Bama Dome . . . 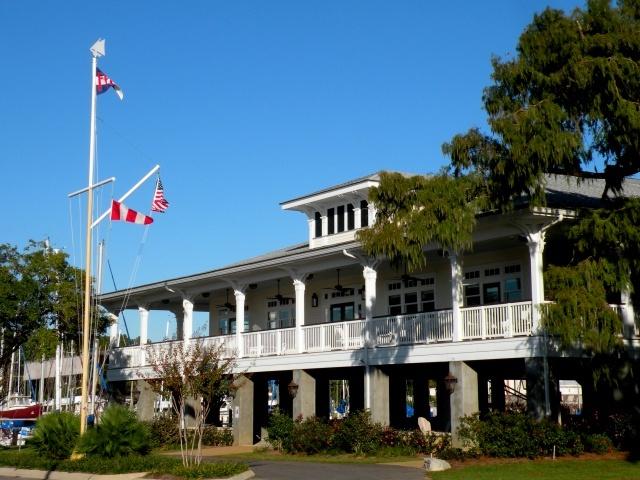 Hurricane Ida didn’t seem to have any impact on the unpicked cotton or, in fact, much of anything else along the Alabama coast.   Although a few of the less adventurous souls headed west, our hurricane preparations were limited to bringing in the lawn furniture and closing the awnings on our urban assault vehicle as we listened to weather reports of the storm weakening . . . 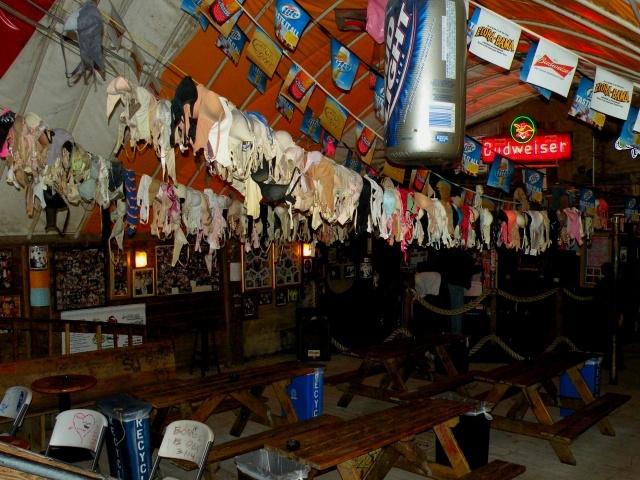 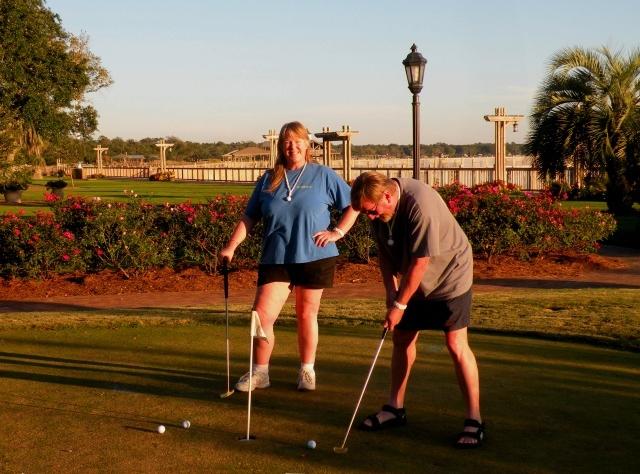 A few miles south of Fairhope you encounter the Grand Hotel in Point Clear.   (We’ll include some pics in our next Update)   Our visit on this occasion was all business as it was specifically to garner some tips to improve my short game from the Club Pro, Tigger McSneaky . . . 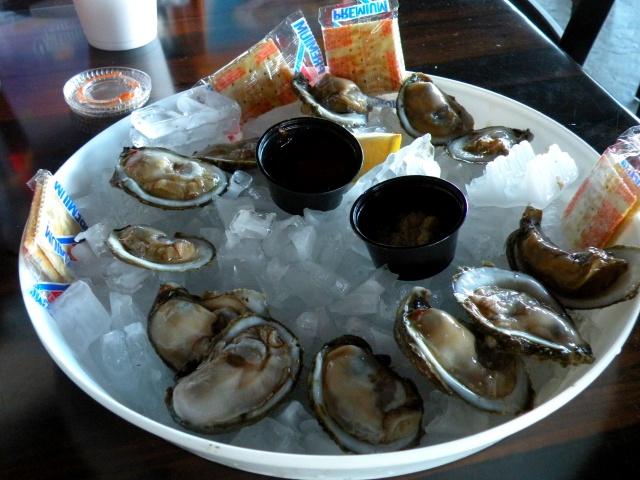 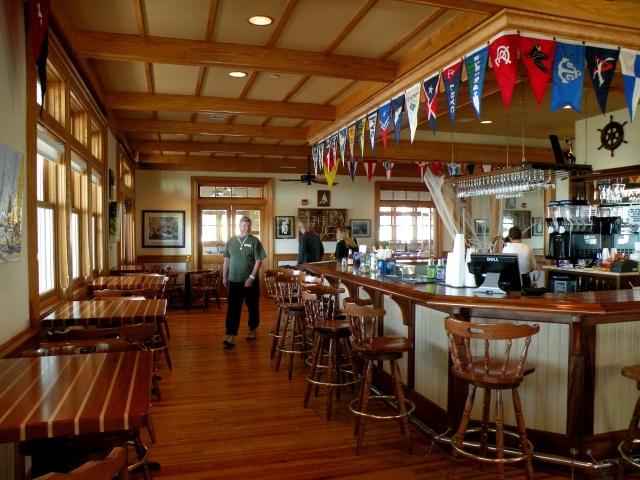 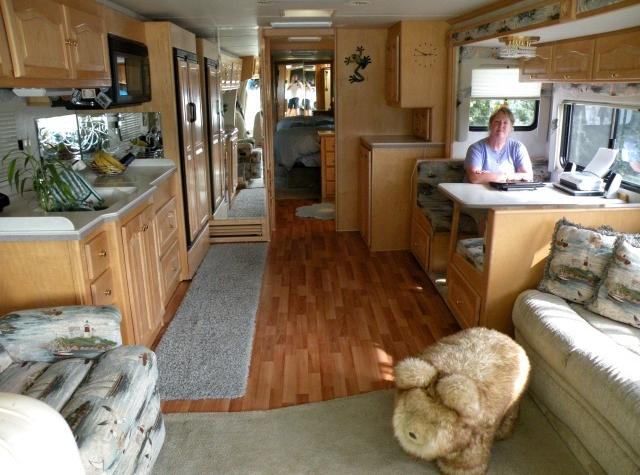 Afterward, we walked through the neighborhood surveying the damage and discovered that this was pretty much all of it . . . 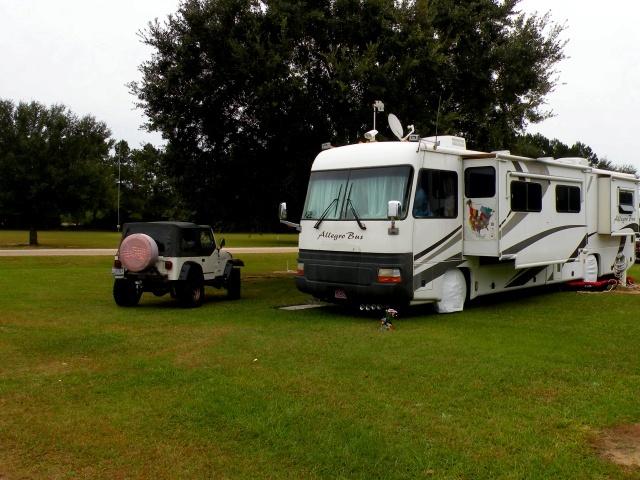 Katrina literally flattened the place which resulted in rebuilding and re-opening last year with a new building designed to be a bit more storm resistant . . . 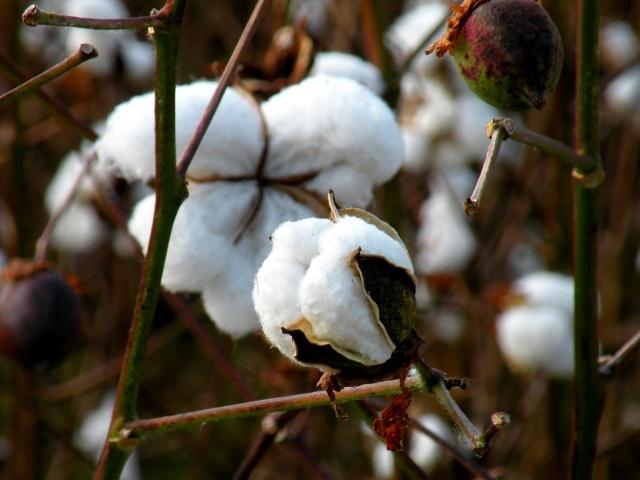 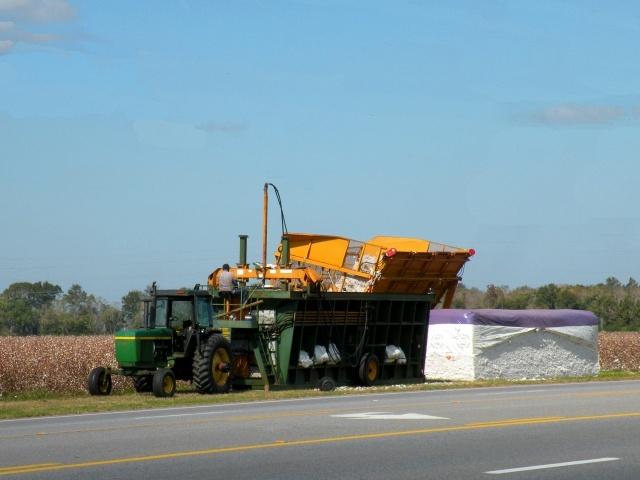 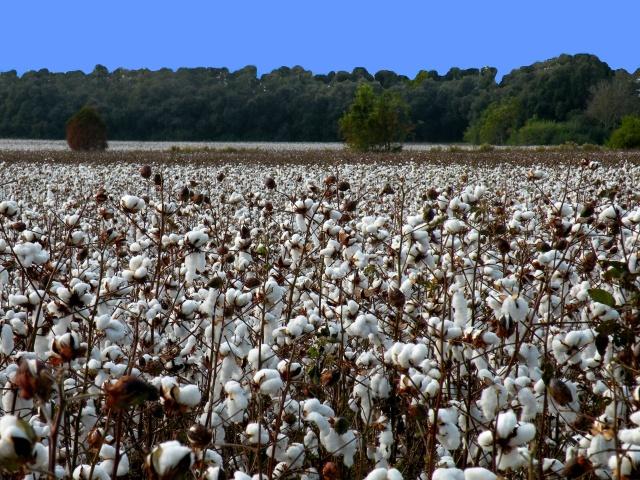 Imagine, if you will, a delectable concoction of spiced rum, Kahlua and dark crème de cacao blended together with vanilla ice cream.  WOW!!  25,000 calories in a glass!   You may then carry this ambrosia out to the deck and sip it while enjoying a sunset on Mobile Bay . . .

Although I am highly allergic to this particular delicacy, my erstwhile dining companion finished off 5 dozen while watching the Saints squeak by the Panthers last Sunday.   (Allergic defined: Curled up in the fetal position on the floor for 24 hours with stomach cramps so severe that you spend every pain-filled moment praying for a mercy killing)   My bride, however, is in training for the Acme Oyster Challenge in New Orleans next month where she will attempt to polish off 15 dozen in one hour and get her photo on the “Acme Wall of Fame” along with Adam Richman of the TV program, Man Versus Food.   Hurricane Zookie is gearing up to wreak some major havoc on the Louisiana oyster fishery and they’ve got nowhere to run!   Until next time.   Hugs, C&K

A legend in the golfing community, McSneaky reluctantly shared a few game improving tips which included the donning of his trademark cap with fuzzy ears to distract an opponent and “accidentally” kicking the ball into the cup when no one is looking . . . 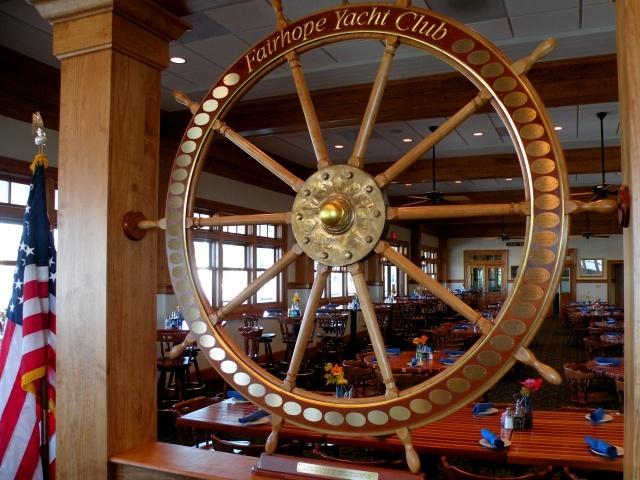 The boll resembles a large acorn when closed (upper right) and gradually opens into 4 sections of cotton which continues to grow to 3 or 4 inches in length before it is picked and baled . . .