After advising them that we were on a Presidential mission, they became a bit more cooperative (sometimes a little “name dropping” is a good thing) . . .

Pretty awful, huh?!  And to think, I’ve been looking at these goobers for years!   We were fortunate that the Southernmost Hoof and Mouth clinic has an office right here in Key West at our local K-Mart store so we wasted little time in making an appointment and getting her in to see one of their top cashier/surgeons . . .

In April of 1982, the U.S. Border Patrol set up a blockade in Florida City, across from the Last Chance Saloon, and required Key residents to show proof of citizenship before being permitted entry to the mainland.  This act so angered islanders that the usually peaceful populace was driven to secede from the Union.  On the day of secession the Mayor of Key West read a Proclamation of Secession and symbolically began the Rebellion by breaking a loaf of stale Cuban bread over a man dressed in a U.S. Navy uniform. 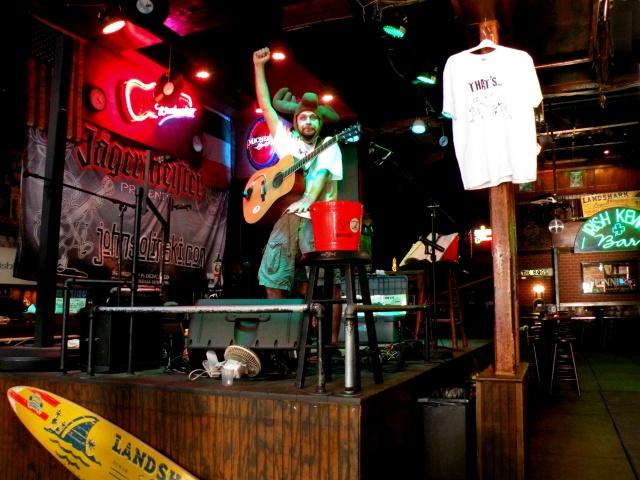 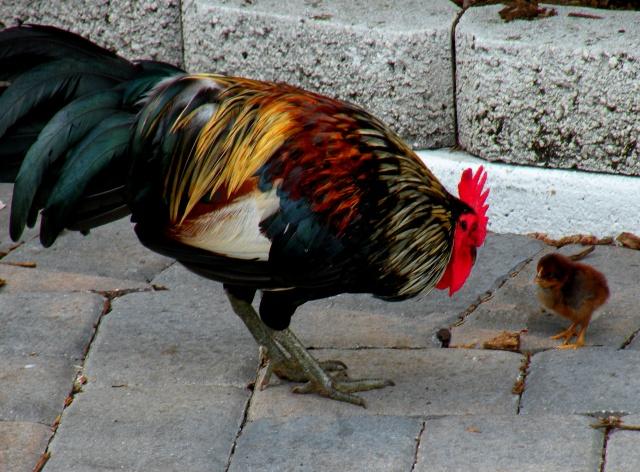 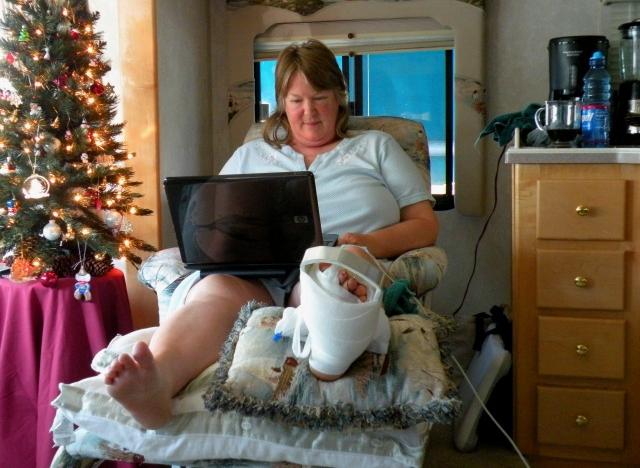 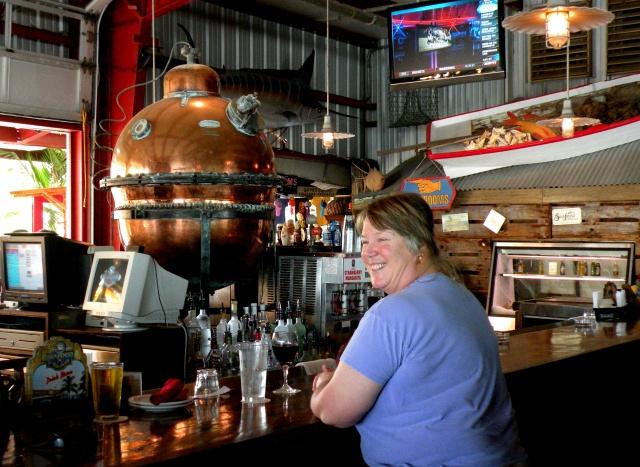 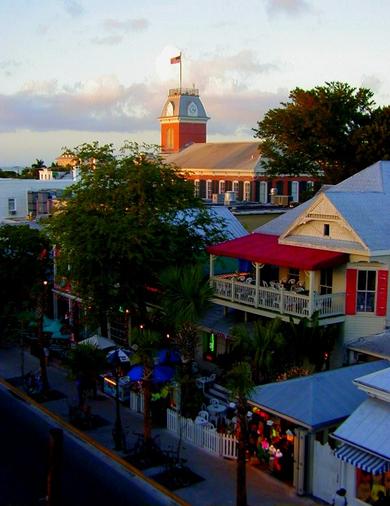 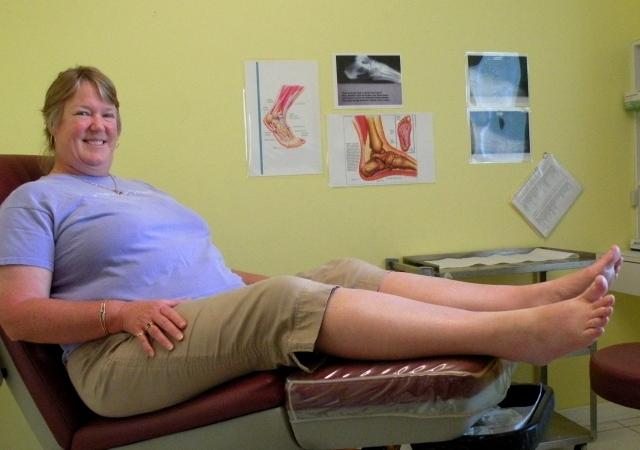 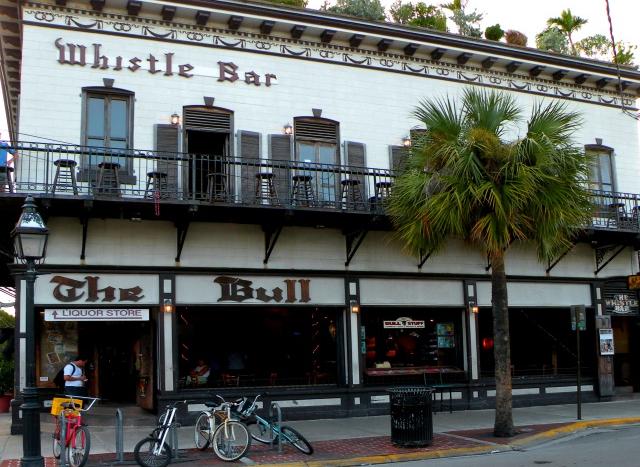 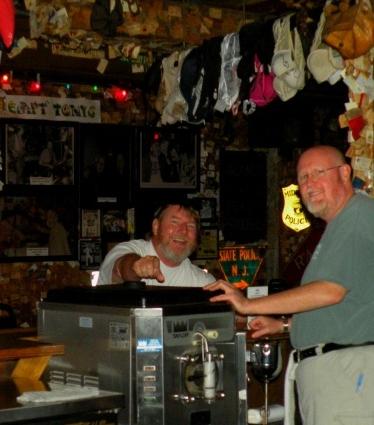 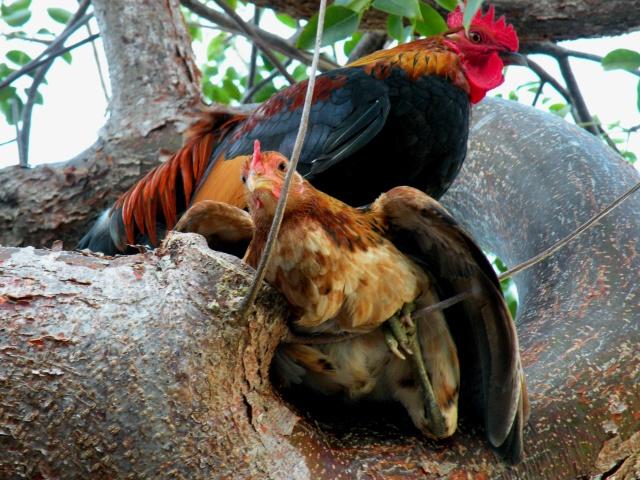 These two were more into the “lay” part of the season.  Chickens, as well as 6-toed cats, roam through the streets, pubs and restaurants around here with reckless abandon and are completely without modesty in all matters of the heart.  The by-product of all this free love seems to be an increasing number of single mothers whose offspring is troubled by that one question that bedevils all such children,   “Are you my daddy?” 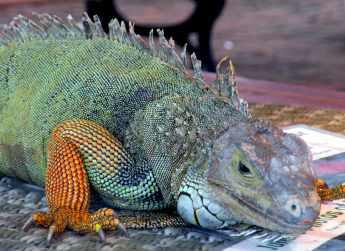 The inside is also a pretty neat place if you happen to make it that far . . .

Hugs and smooches, Chuck and the Big Hopper

We came upon these guys wandering near the entrance to Key West hospital.  I suppose you are now thinking, “Hospital???   Again!!!.”   Yep, the saga of Awful Knawful continues after the briefest of interludes.   I’m happy to report that my bride’s hospitalization was simply the result of bunion surgery and not due to any further misadventures on her 2 wheeled transport . . .

The fellow with the moose antlers will only be at Irish Kevin’s until January but, after speaking with the owner, I may have secured a gig for a friend of mine in San Carlos, Mexico.  Although lacking a fashionable set of moose antlers, he does manage to engineer a series of on-stage “costume” changes through a variety of clip-on multi-colored fluorescent ponytails with matching Groucho eyebrows during his performance.   That, along with his willingness to play for corned beef and beer, has guaranteed him a lifelong career at Irish Kevin’s.   Another “must see” spot along the pub crawl is Captain Tony’s . . .

The Bull, The Whistle and The Garden of Eden.  There are 3 separate pubs on the 3 separate floors, each with its own entertainment.  The Bull, relatively tame to protect the passersby on the street and The Whistle, occasionally more rowdy, are typical KW watering holes.  The Garden of Eden offers a slightly different view of the area as it is located on the roof, is completely open to the elements, and just happens to be clothing optional . . . 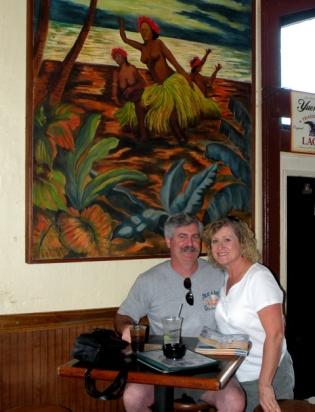 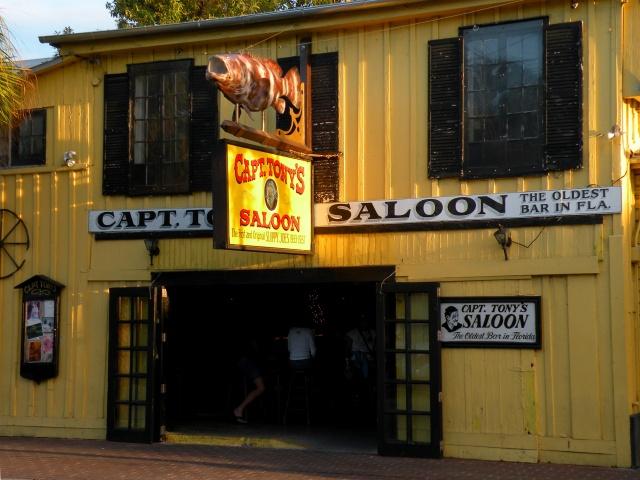 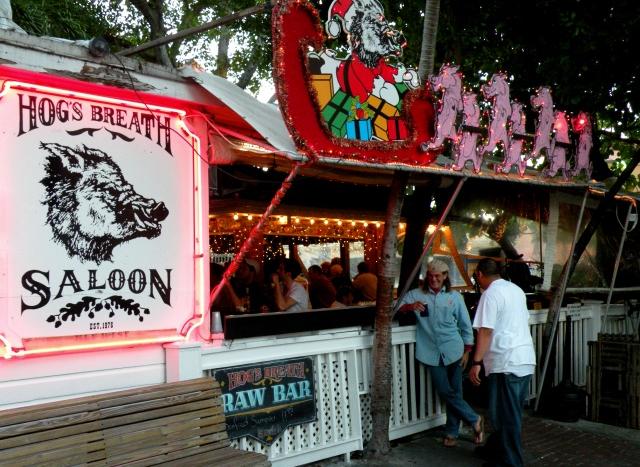 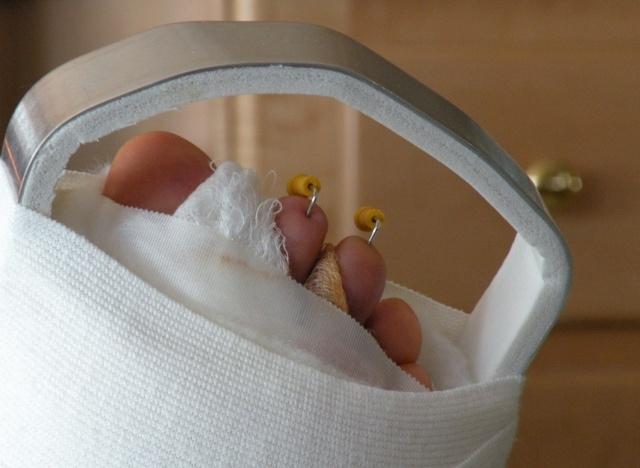 We immediately encountered a planning dilemma in that we had no particular route in place to ensure an orderly visitation to the assorted pubs and watering holes on the list provided by the local A.A. chapter of places their membership should avoid in KW. (My bride is certainly on some strange mailing lists)  And so, in keeping with the national trend toward community organization which has ensued with the election of the new Prez, we took it upon ourselves to organize the community of Pubs along Duval Street.  The folks around here tend to be a bit quirky, though, and do not lend themselves well to any sort of organizing . . . 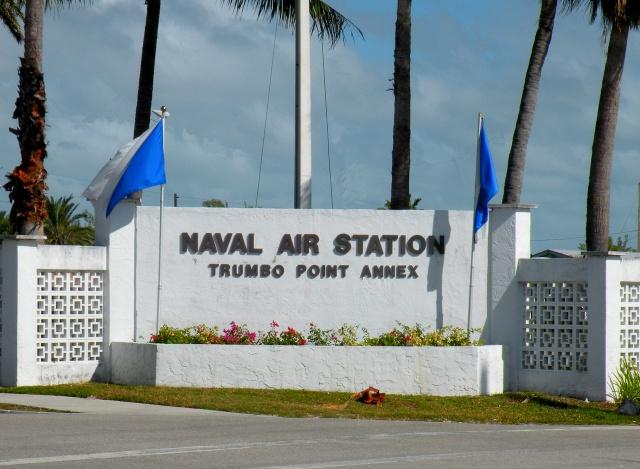 My bride’s incapacitation just happens to have coincided with the mysterious disappearance of our house elf.  I noticed this first when I got up the following morning and discovered that my dirty shirt was exactly where it had fallen to the floor the night before, the dishes were unwashed in the sink and the newspapers were still scattered all over the sofa where I had left them the previous evening.  As I patiently await the elf’s reappearance, our home is slowly deteriorating toward hoveldom and may eventually require some drastic intervention.  I have already purchased a number of large garbage bags to gather up and dispose of all the clothing, dishes and newspapers which just won’t go away on their own.  Prior to our latest surgical adventure, we did manage to get out and visit a few of the pubs and restaurants along Duval Street . . . 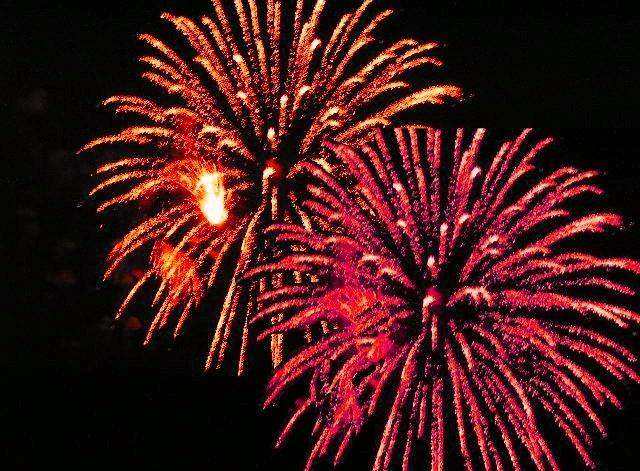 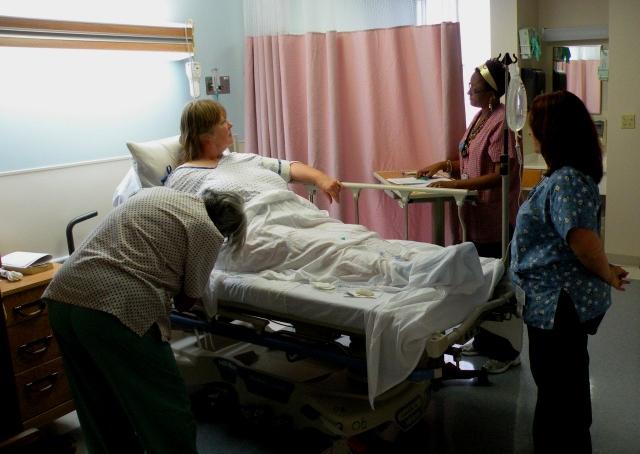 These pics were taken at about 11am on a weekday.   We aren’t sure if these folks arrived this morning or are holdovers from the night before.   No trip to KW would be complete without a stop at the Hog's Breath Saloon . . . 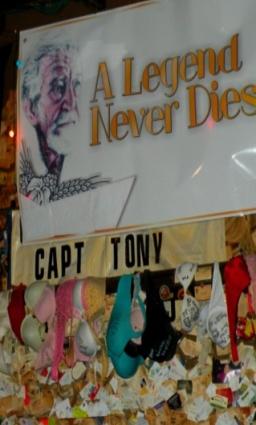 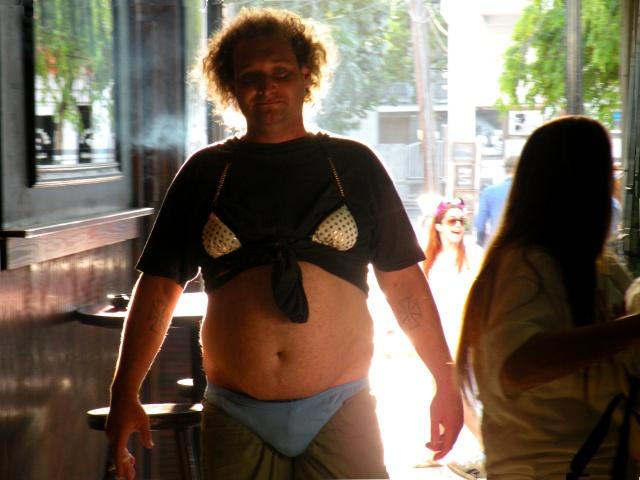 Captain Tony was a true master of the spoken word.  Sloppy Joe’s is another of those popular establishments that gets so crowded at times that folks are just hanging out the windows . . .

Key West at Christmastime is one helluva cool place to be!  The entire island is decorated from sea to sky and pretty much anywhere in between that offers a convenient spot to hang or lay something . . .

Captain Tony is a legendary Key West saloon keeper and philosopher.  His utterances are proudly displayed throughout some of the finest watering holes and dives in the area:  “All you need to succeed in life is a great ego and a tremendous sex drive, brains don’t mean shit.”

GOTCHA!!  Bet you thought we were gonna include some different photos.  If you are truly seeking adventure along Duval Street, this place should be on your list but only at the end of a long indulgent day!   I must confess that we have yet to make it to the rooftop on this trip (the picture is from Jan. 2000) as neither of us feel comfortable enough in our skin to “reveal all” to a bunch of strangers.  On our previous visit we actually found it a bit awkward negotiating our way through the throng of clothing challenged patrons in order to escape.

I can’t help but wonder if some poor horse is wandering around Key West right now with only 3 shoes.  My bionic wonder doesn’t share that particular concern as she now enjoys both Coast Guard and police band radio transmissions which are fully adjustable through a series of creative toe wiggles.  She is also directing her remaining energy into learning to balance on one foot as she hops about the house and adapting to life as a pampered pest, err . . . I mean pet . . . 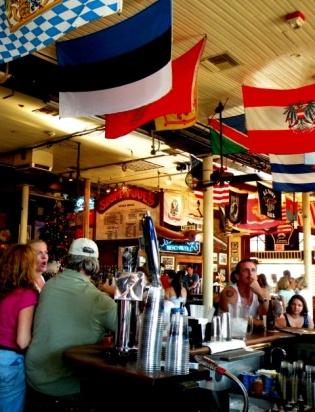 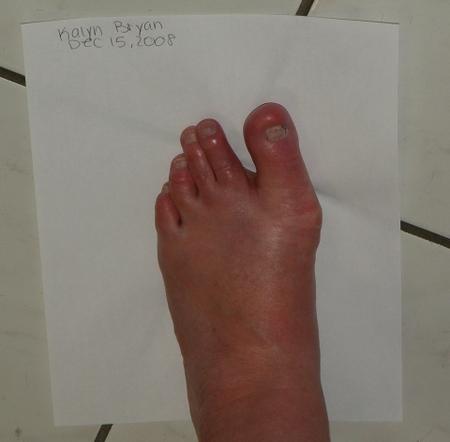 I don’t know if this place is in some way related to the one in Carmel, California as there was nary a sober soul in sight to ask.  The grand finale to any Duval Street pub crawl is . . . 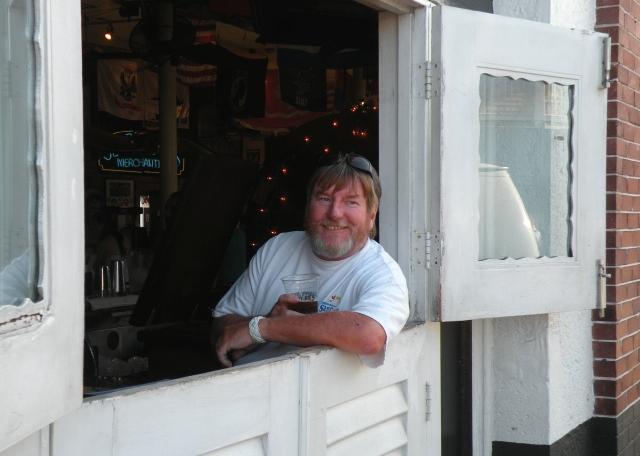 I simply do not understand how she garners such attention!   The surgery went well and I brought her home that afternoon in good spirits but a little less feisty.   She fared quite well through her mini hospitalization but received a failing grade on her underwear.   A little known fact: a nurse is assigned to check and grade your underwear during the time you are unconscious for the slice and dice process and the grade you receive determines whether they offer you fruit juice or water during your post surgical recovery period.   And THAT, my friends, is the reason you should follow Mom’s advice and never leave the house with holes in your underwear!   She is now hobbling around on a football size foot complete with an attached horseshoe and antennae protruding from 2 toes . . .

Never being without complication, regardless of the activity, my bride required a special trip to Miami to verify that the blood flow to her “popsicle toes” was sufficient to enable post surgical healing . . . and to check her unusually warm dry nose.  The hospital check-in and pre-surgery preparation came next and required the participation of every surgical nurse on the floor . . .

After one minute of rebellion, the Mayor, now Prime Minister of the Conch Republic (“We Seceded Where Others Failed” ), surrendered to the Union and demanded a billion dollars in reparations to repair their war ravaged land.  The Border Patrol subsequently removed the road block, traffic resumed at its normal frenetic pace and peace was restored.  But Conch Republicans (heh-heh-heh) to this day are stockpiling stale loaves of Cuban bread against any future federal intrusion into island life.  I think we’re gonna join ‘em!!!  Until next time, have a Happy, Healthy and Prosperous New Year and enjoy tonight's fireworks from a safe distance. . .