Bourbon Street, the unofficial heart of the city, was wall-to-wall with cheering, high-fiving, drinking,
black-and-gold shirted and face-painted crying fans . . . 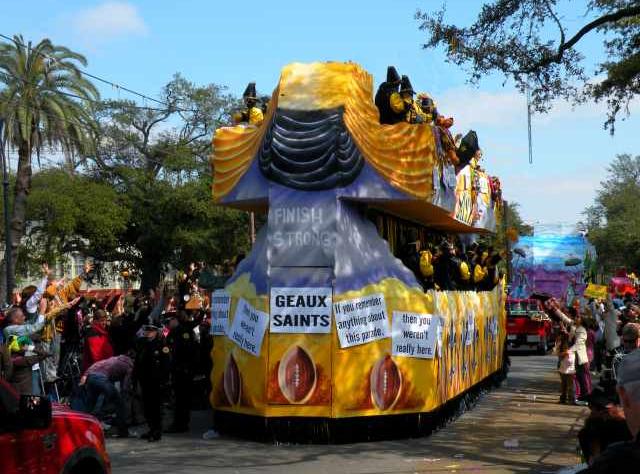 There are, of course, many traditional floats depicting armor-clad knights . . . 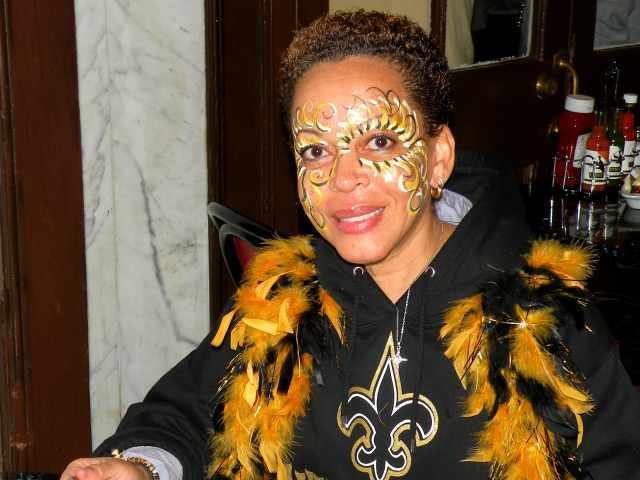 Many of the parades after dark and even a few during the daylight hours in the French Quarter are geared to an adult crowd . . . 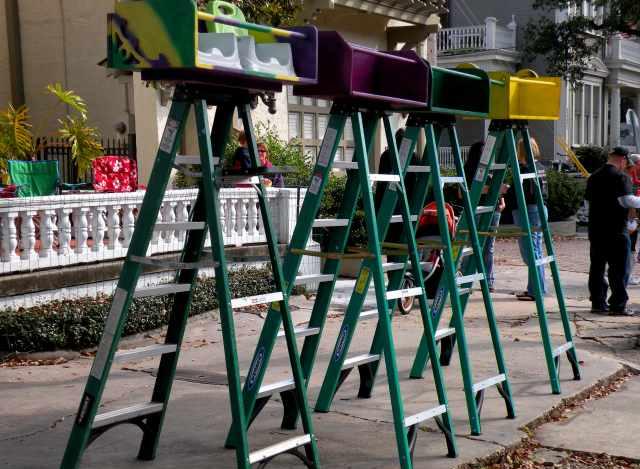 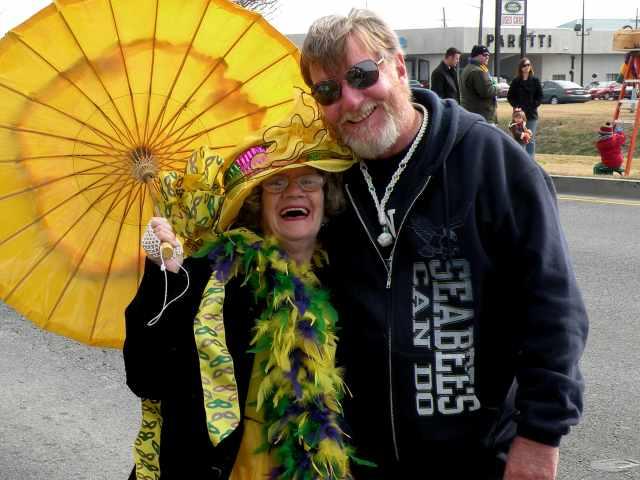 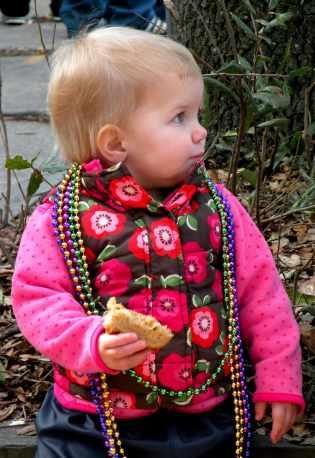 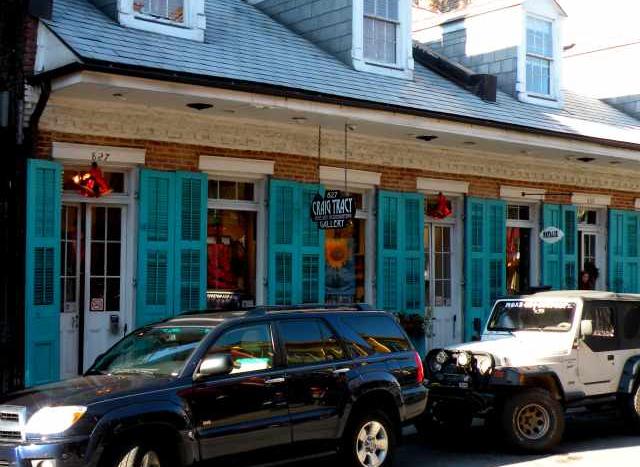 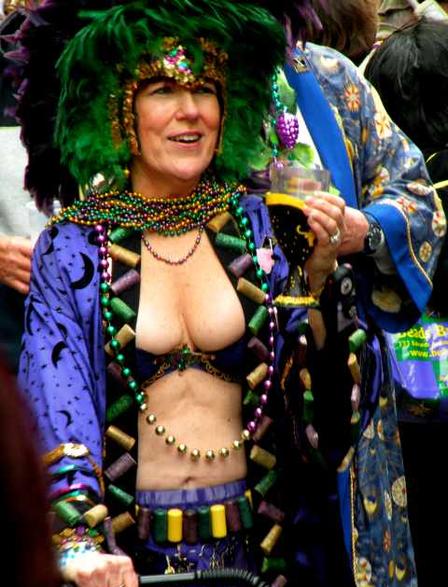 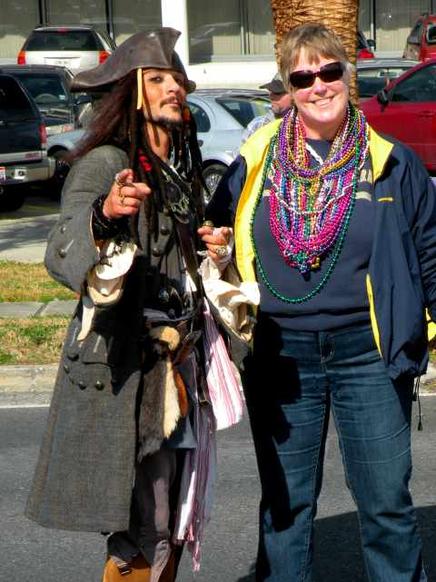 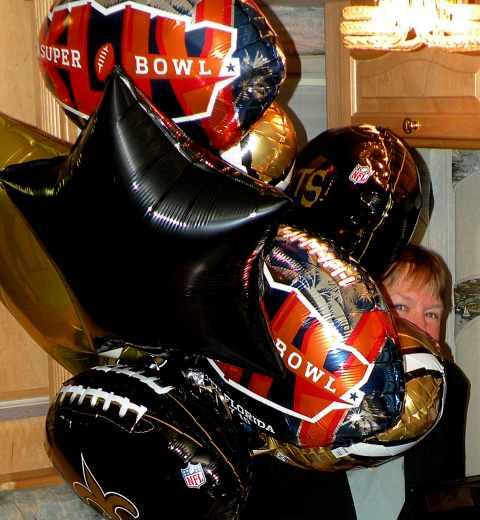 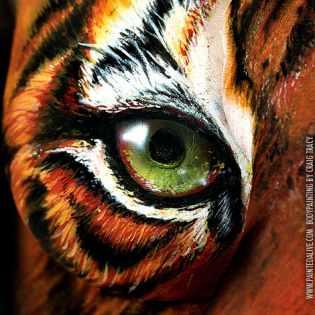 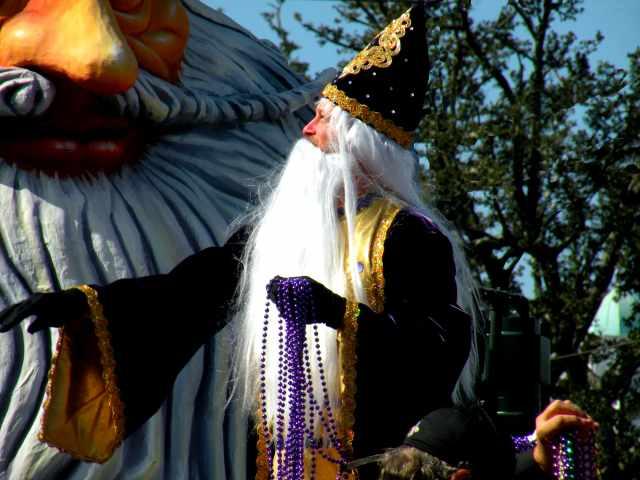 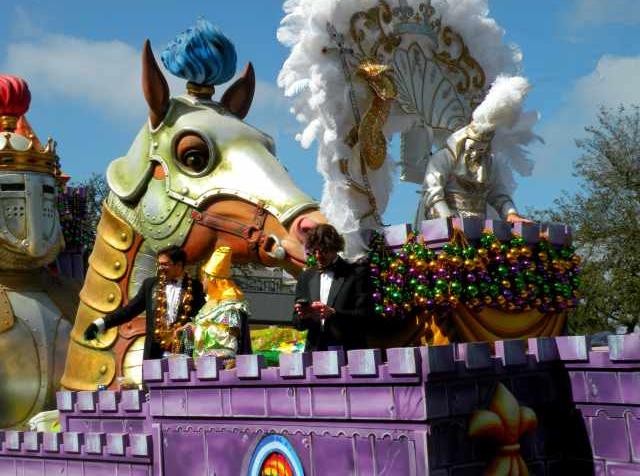 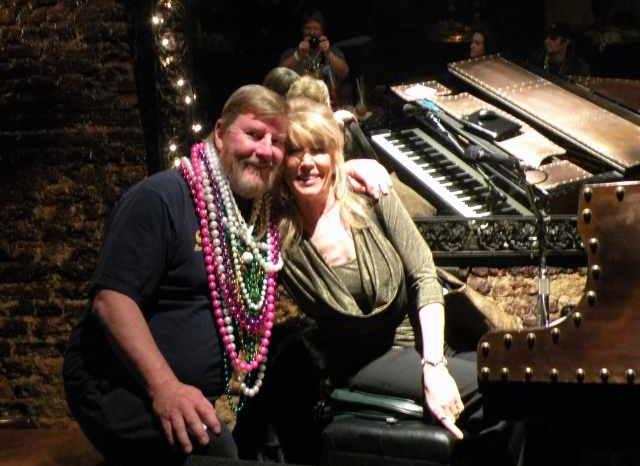 The NOPD was out in full force on their trademark Percheron horses to control the more unruly celebrants . . . 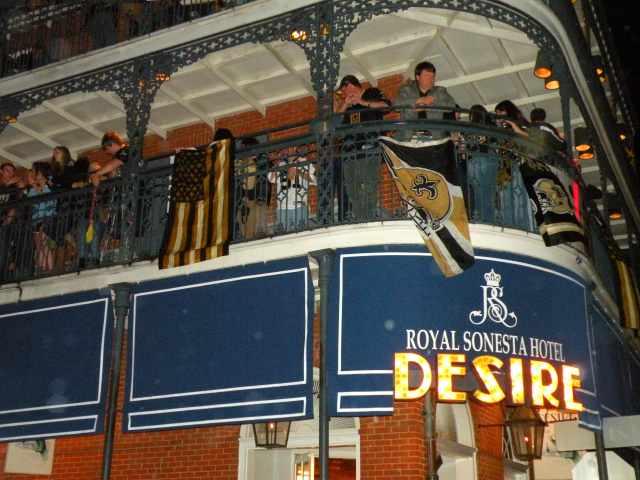 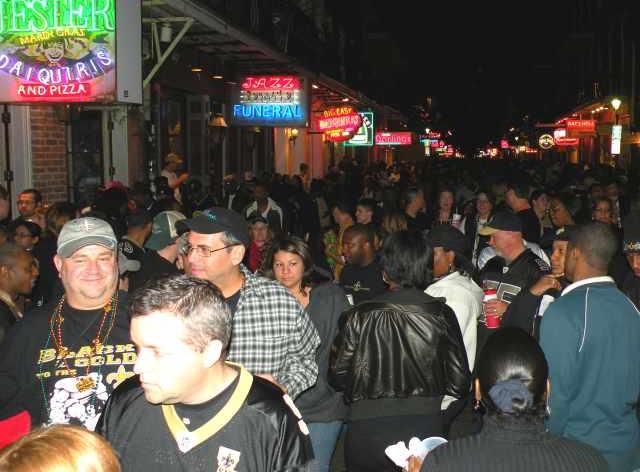 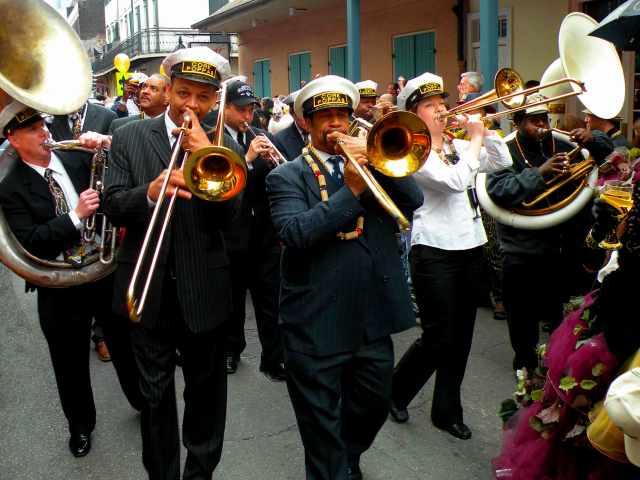 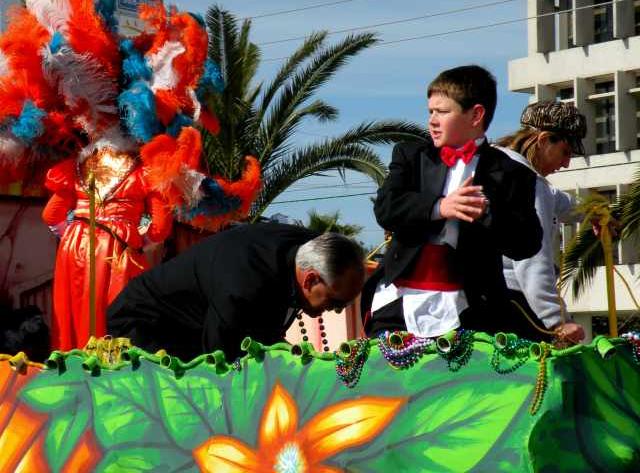 Or, if you are really serious, a trip to the piano bar at Pat O’Briens for a Hurricane or two may be more to your liking . . .

The one thing that all parades have in common are the doubloons, cups, stuffed animals and beads that are thrown into a crowd yelling, “Throw me sumthin’, Mistah!”  Ordinarily the catching of these throws is a pretty safe and fun activity.  But you need to keep your eyes open and your wits about you when attending the “Little Rascals Parade” as these kids are filled with youthful exuberance that manifests itself in multiple strands of beads heading toward your nose at the speed of light. . .

After a hard day of parading, you can always relax with a glass of wine at Musical Legends Park while listening to some New Orleans Jazz . . .

She happened upon this bunch of her fellow Norwegians and ended up sashaying through 5 blocks of Bourbon Street chanting, “WHO DAT SAY DEY GONNA BEAT DEM SAINTS!!” before I was able to rescue them from her clutches!  In addition to the madness of a crowd caught up in Super Bowl fever, we are also in the middle of the Carnival season here in the Big Easy and many of the floats in the 50 or more parades are adorned with New Orleans Saints inspired themes  . . . 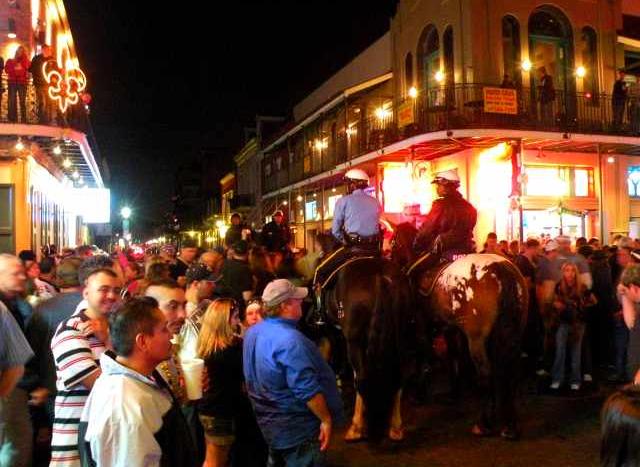 And Carnival Queens arrayed in full Mardi Gras splendor come from as far away as the Great Lakes to participate . . . 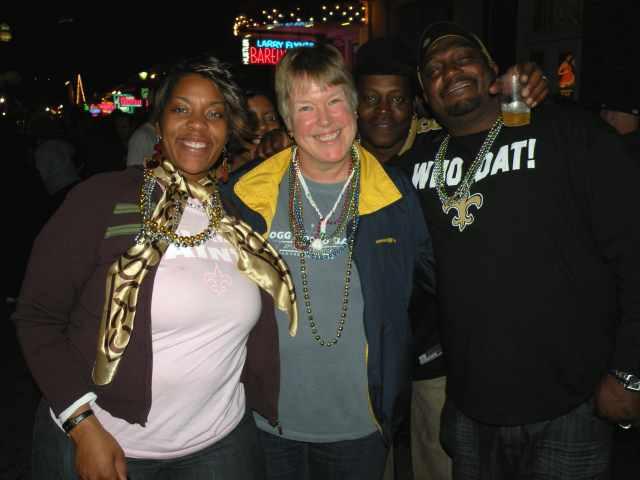 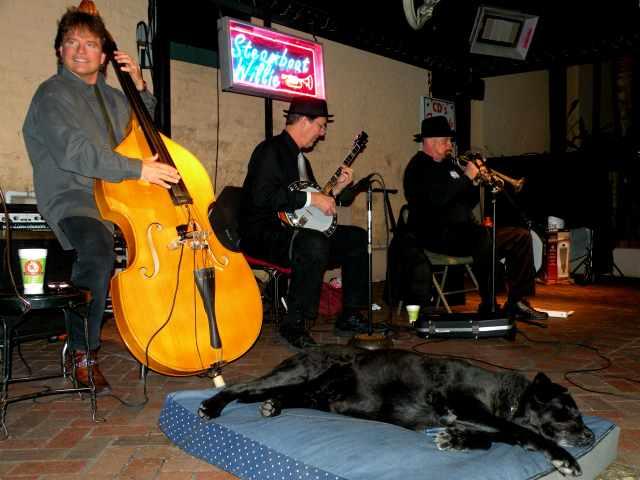 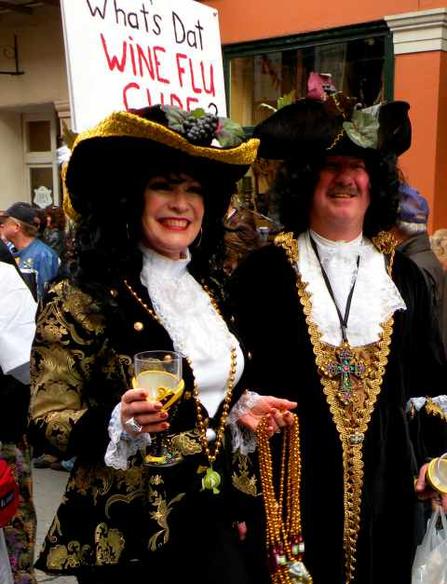 The Krewe of Cork is a walking celebration of wine and debauchery and awards prizes for various categories of costume from the French aristocracy . . .

This particular gallery belongs to Craig Tracy and his amazing collection of body art... 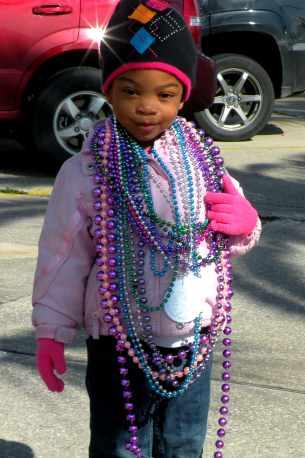 Craig owns a one of a kind gallery which is very unusual, even for a place like the French Quarter.   All of his artwork has been painted on live models and then photographed. (Can you guess which body part is sporting the tiger’s eye?)  Kalyn and I were very much impressed with both his creativity and photographic skills and highly recommend a visit to his gallery when you next find yourself in New Orleans.  I offered to model for Craig but he didn’t think it would be a profitable endeavor due to the enormous quantity of paint and canvas he would require and what he referred to as my lack of “curb appeal.”  Hmmmph!!!  Well, it is nearly dark and we have to head Uptown to catch the Druids Parade along Magazine Street.  Until next time, “Here’s looking at you, Kid!” 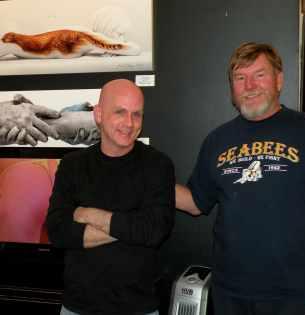 As it turned out, the crowds on the street were too damn happy to cause any trouble and the local constabulary simply enjoyed a birds-eye view of the festivities while many Saints fans took in the show from one of the many wrought iron laced balconies overlooking Bourbon Street  . . .

And a wizard or two resplendent in flowing robes and pointed caps . . .

This determined future Mardi Gras King is definitely headed for the major leagues with his Nolan Ryan wind-up and delivery of that bunch of beads he’s clutching in his paw.  Nearly all the parade routes are lined with small children who are seated atop these specially built perches for a better view . . .

You may have noticed that the old fat guy always ends up with the prettiest girl!  Of course, there are many art galleries to visit along Royal Street if you just want to escape the frivolity and immerse yourself in New Orleans’ culture . . .

One of the things we really enjoy about travelling as we do is being visited by friends or family in any of our many favorite places.  We just put our friend, Cindy, and her “sweetie,” Frank, on a plane back to Phoenix after they paid us a surprise visit in N’awlins.  As we were awaiting their departure time munching mollusks at the Acme Oyster House inside the Louis Armstrong Airport Cindy noted, “America now has a black President, New Orleans has a white mayor, Chucky no longer drinks beer and the Saints have won the Super Bowl.  Hell has surely frozen over!”  I don’t know what’s happening in Hades but here in the Crescent City, bedlam broke out immediately after the Saints’ victory Sunday night . . .

These guys looked good both coming and going . . .

Most of the morning and mid-day parades are very child friendly and draw the participation of such notables as Johnny Depp reprising his role as Captain Jack Sparrow for thousands of adoring fans, both young and not so young  . . .

My bride likes to be right in the middle of the party and can generally be found cavorting with anyone who will have her . . . 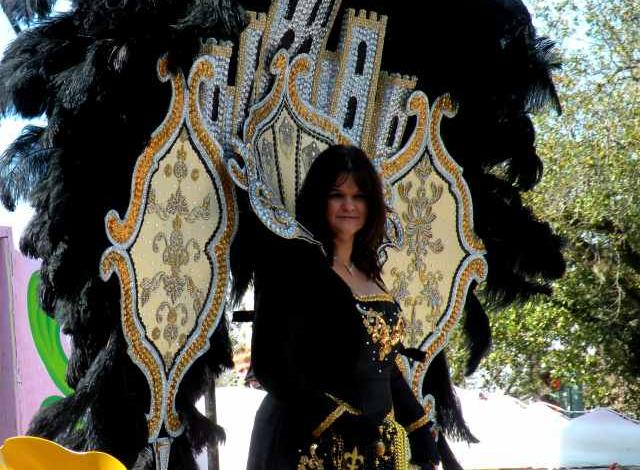 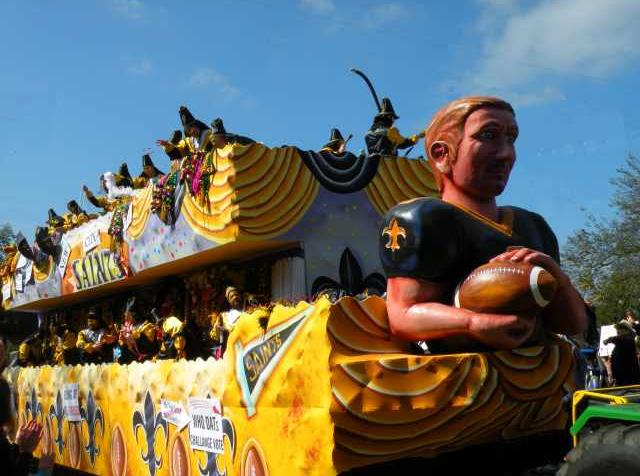 And at the end of the day they find themselves loaded down and toting home parade booty . . .