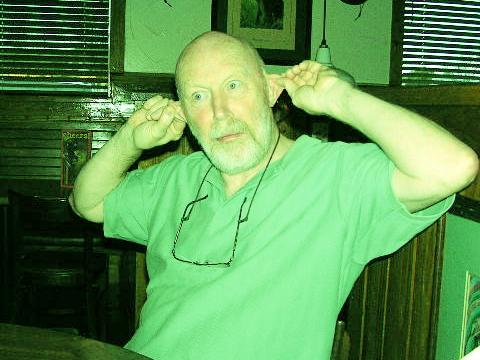 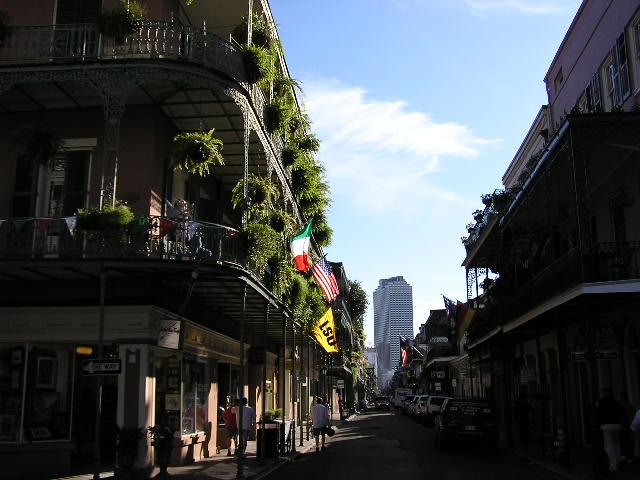 This is not really a leprechaun but, in reality, is my infamous brother-in-law who visited with us during our recent travels from New Orleans to Pensacola, Florida, and back.  Fortunately the haunting lasted a mere 15 days and he and his wife have safely returned to the Zimmerman fly farm in Grass Valley, California.  New Orleans has always been one of our favorite places to visit for the food, parties, parades and contrasting views of the old and new . . .

Okay, you have probably just experienced a very large space between the last piece of text and this picture.   Let me explain . . . our old reliable computer developed a hinge problem last month which caused it to make some rather disconcerting noises whenever we closed it.  We stopped by our local Gateway store in Austin, Texas, and were told they could fix the problem for $300 and we would be without our computer for 4-6 weeks while the work was being done or we could buy a new computer for a mere $1700.   Since our computer is our main lifeline to the real world, as well as our bank account, we bit the bullet and decided to buy a new one.  The “old” one was nearly 5 years old after all and totally obsolete according to some 15 year old we recently ran into at a Kinko’s who wanted to take a picture of it to show to his friends.   Hmmmmppphhh!  But, alas, the proverbial fly in the ointment appeared when we attempted to connect to the Internet on our new computer using our “old” cell phone.  It seems that the 2 were not compatible and there is no way known to modern technology to make them work together.   And sooooo . . . off we went to Verizon and bought a new cell phone which was compatible with our new computer and allowed us to reenter cyber space.   Now, you would think that this would resolve all of our problems and we would be able to live out the remainder of our lives fat and happy.  NOPE!  All seemed perfectly wonderful until the day we attempted to download pictures from our “old” camera into our new computer.  The old computer received pictures via a 9 pin mouse port and the new one had no such part.  We now needed a camera which could download via a USB port.  And sooooo . . . off we went to our neighborhood Best Buy store and bought ourselves a brand new fancy Olympus C-740 digital camera complete with a USB download.  Now that should have been the end of our troubles, but anyone who has a camera which accepts multiple lenses and other gadgets knows that your trials are just beginning.   In addition to a $400 camera and the original $100 in “extras,” we just had to have the $300 zoom lens and another $100 worth of “extras.”   All totaled, the squeaky hinge on our old computer has cost us nearly $3000 thus far and we haven’t even made into our local Fry’s Electronics store to investigate the latest and greatest software available for our new computer.  I’m beginning to wish I had spent that $.99 for a can of WD-40.  This is the first Update I have attempted to write using our new computer and I can’t say that I am very happy with only being allowed to place 1 picture on a page and the enormous spacing between pages.  Please let me know if any of you have difficulty receiving or reading this and I will try to make some adjustments.  (HAH! Fat chance . . . I am only barely able to find the “On/Off” switch).  Until next time, hugs and smooches!  Chuck and Kalyn

Saint Pat’s greetings from New Orleans!!  We have, once again, found ourselves in the Big Easy during that most sacred time of year for all of us faux Irishmen.  Green beer, green beads, green parade floats can be seen in abundance and an occasional green leprechaun puts in an appearance . . .