I wanted to purchase this painting for my brother-in-law but my bride was afraid that it may provide too much of a test of the quality of his recent heart surgery.   We decided on a still life instead.  Those of advanced age seem to really enjoy the stimulation provided through a painting of a nice bowl of prunes.   Old Town is the area where all the street fairs are held and hardly a weekend goes by that there isn’t an art or craft show occurring . . . 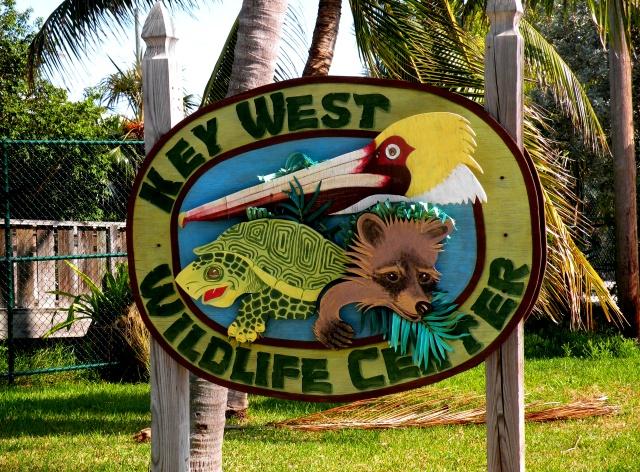 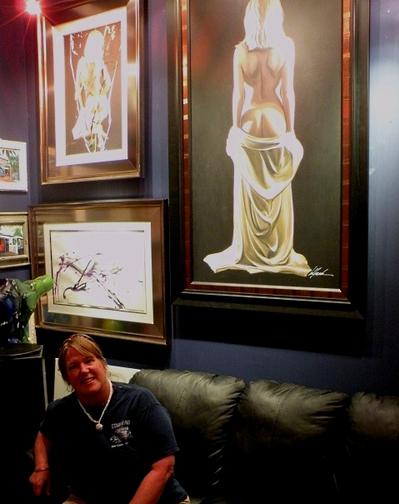 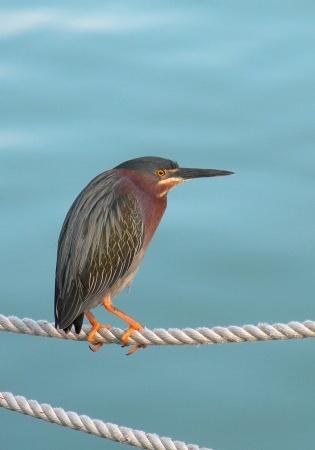 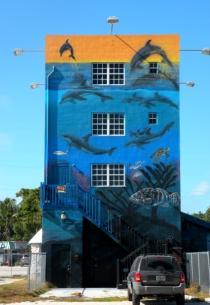 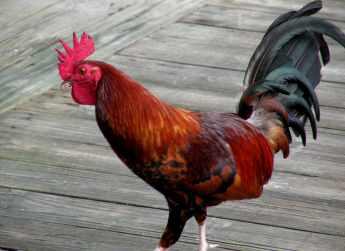 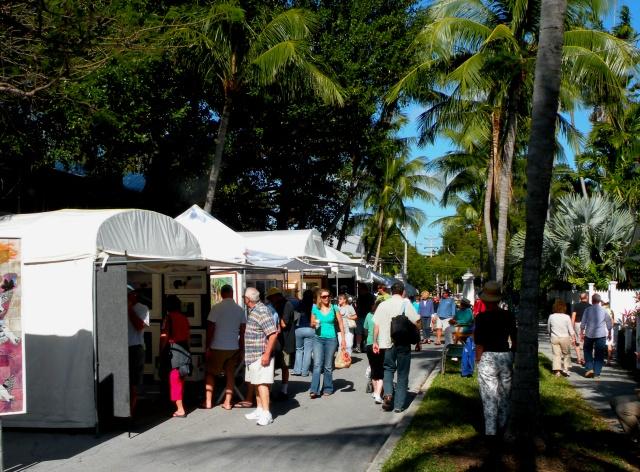 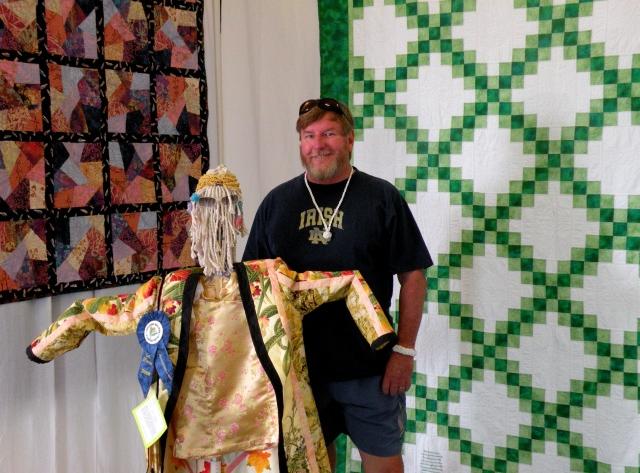 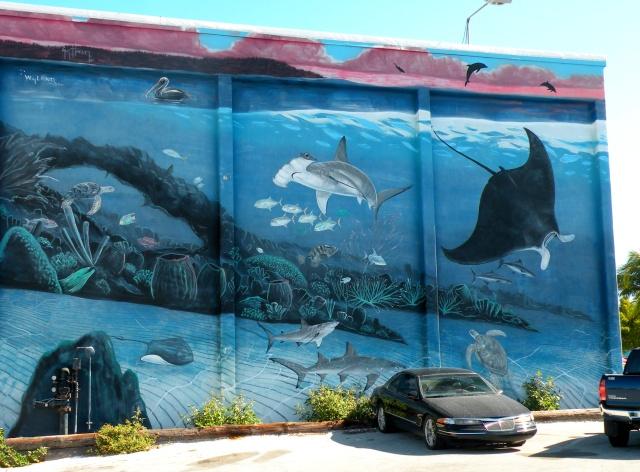 In our previous 2 installments of “Gibberish for Junkies” we mentioned the numerous fine restaurants, decadent watering holes and quality entertainment to be found throughout Key West.  Lest we convey the inaccurate impression of Conchs being like the grasshopper who cared only for fun and self indulgence, the island is also well known for its active community of local artists as well as some major talent who maintain a presence in paradise.   Among the most well-known of this group are Peter Lik, Guy Harvey and Wyland . . . 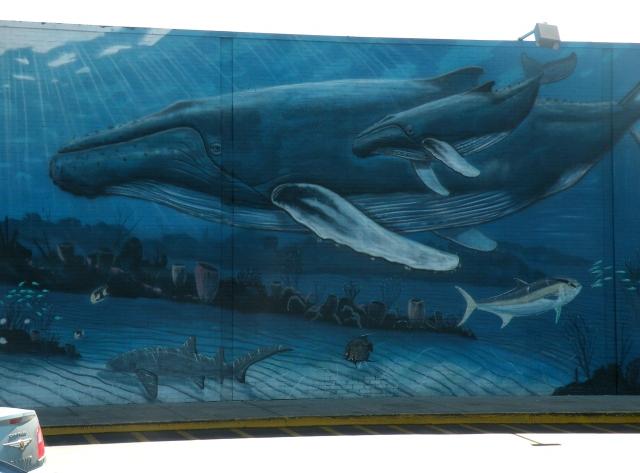 Wyland has completed his #100th and “final” mural on a building at the Bejing Olympic Games.   Many local artists have also tried their hand at these larger than life productions and their efforts can be seen on buildings and walls from Florida City to Key West . . .

Manatees seem to be one of the more popular subjects and are depicted in paint, clay, bronze, wood and numerous other mediums.   The Wyland Gallery on Duval Street features many of his paintings and sculptures as well as the work of several other very talented folks, some being a bit more titillating than others . . .

Although they do not appear to be exceptionally fast, they can actually pick up and relocate more quickly than most predators anticipating an easy meal.  The iguana’s tail is also a pretty lethal weapon and can be whipped hard enough to cause pain and numbness to an inquisitive hand.   Of course there are always those who insist on testing their limits . . .

The first of these murals is located in Old Town, Key West and the second can be viewed at the K-Mart store on Marathon Key.   Further up the chain, on Key Largo, stands a rather peculiarly shaped building between the north and southbound lanes of the Overseas Highway.   I don’t know what purpose it serves other than as a canvas for another of Wyland’s murals, but it is for rent if you’re interested  . . .

I am unable to imagine a nicer location to hold events such as this.   My bride, however, does not confine herself to the great outdoors when in search of a craft exhibit . . .

I intended to close out this edition with a sunset but have decided instead to end with a ray of sunshine . . . 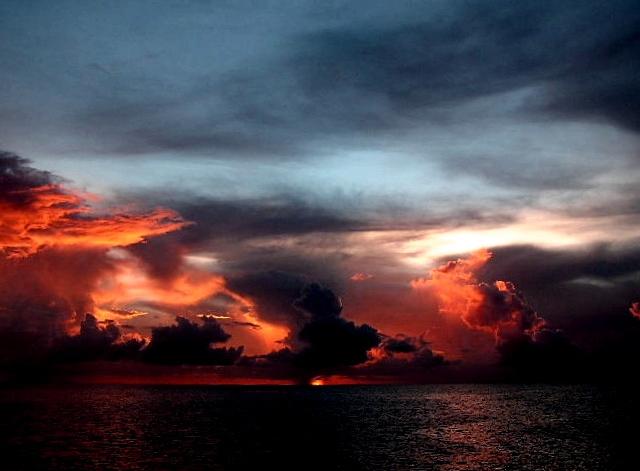 I suppose that the local wildlife must be having an accident-free year as there was naught but a pelican in hospital and only a couple of other wild birds dropping by for a visit . . .

In fact, this place actually looks more like a staging area for Colonel Sanders than a wildlife center.  Their primary purpose appears to be that of a collection and redistribution center for the many “problem” chickens inhabiting the island.   They transport the captured poultry to a “free range” area on the mainland where they are released to enjoy the freedom and solitude of the great outdoors.  Now you know where that “free range chicken” on restaurant menus comes from.   On the subject of wildlife, two of our girls joined us for a week of fun in the sun . . .

We have just paid our last visit to my bride’s podiatrist where she was presented with her “walking papers,” literally!   The final x-ray indicated that everything has progressed to the point where she can discard "das boot" and slip into a real pair of normal everyday people shoes, the first she has worn in more than 2 years of experimentation with various prescription footwear for treatment of her finicky foot.   We stopped off at Sears and picked up a new pair of Cross Trainers and immediately subjected them to a rigorous afternoon of one of her favorite activities, shopping!   The only down side to the surgery we have thus far encountered is that she now has one size 9 foot and the other is an 11.  If all goes well, we will be heading out of here next Sunday, March 8, and meander along the Atlantic seaboard through St Augustine, Savannah and eventually Red Bay, Alabama, for some overdue RV maintenance.   Here’s bidding y’all a fond adieu from the Florida Keys.   Hugs and smooches!!  Chuck and Kalyn

There were, however, thousands of chickens!

He put on a pretty good show with a lot of Jimmy Buffet style island music, as well as songs from the 60’s and 70’s, and a lot of original music.   We let him know that Turk is presently floating around the equator somewhere enjoying shipboard sunsets . . . 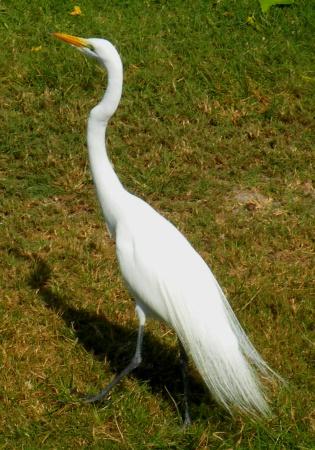 When they visited with us last year in New Orleans, they rarely made it home before 4 or 5am.   In spite of the Duval Street nightlife being every bit as exciting as the Big Easy, they only had 2 such nights this trip.  Jenny Marie discovered that she may have over indulged a bit in her quest for the perfect Bloody Mary and Vicky didn’t fare any better during their nights of running with the big dogs.  I think that next time they may just sit at home on the porch with the cat and the old folks.  It was unfortunate that the week they spent here was during a cold snap which was not conducive to any water oriented activities . . .

I just don’t understand how I keep getting roped into these damn quilt shows!   I expected the one in Panguitch, got snuck up on by the one in Natchitoches and was completely blind-sided by the one she dug up in Key West.   Whoda thunk they’d allow such goings on in this idyllic place?    I am writing a letter of complaint to the City Council and circulating a petition to ban any future shows without prior approval of 95% of the voters.   These things just HAVE to be stopped!   Even more numerous than the aspiring artists, we also have herds of iguanas roaming the streets, sidewalks and yards of KW . . . 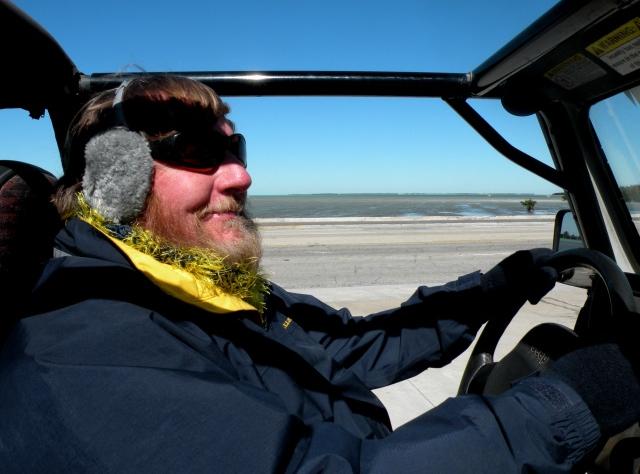 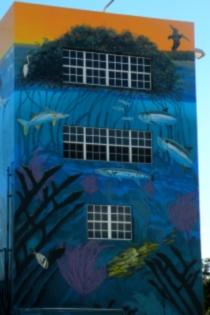 These critters come in an abundance of sizes with the younger ones being the more brightly colored . . .

As I was taking this picture, I was contemplating what my Steve Irwin wannabe would look like in 2 of those walking boots.   Did you notice that the tail is locked and loaded?  The local Wildlife Center came pretty highly recommended as a place to see many of the indigenous birds and animals, some with injuries and being cared for until their eventual release . . . 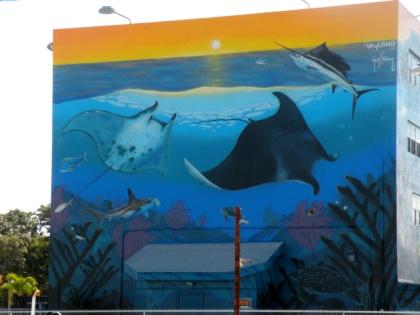 Wyland is best known for the murals he has painted all over the world depicting a variety of marine life and, most notably, whales . . . 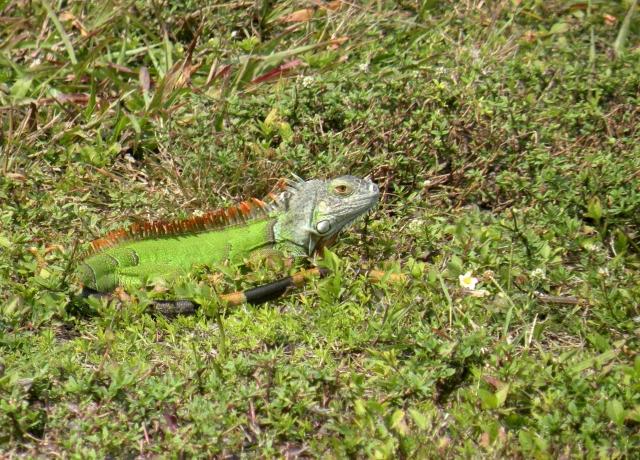 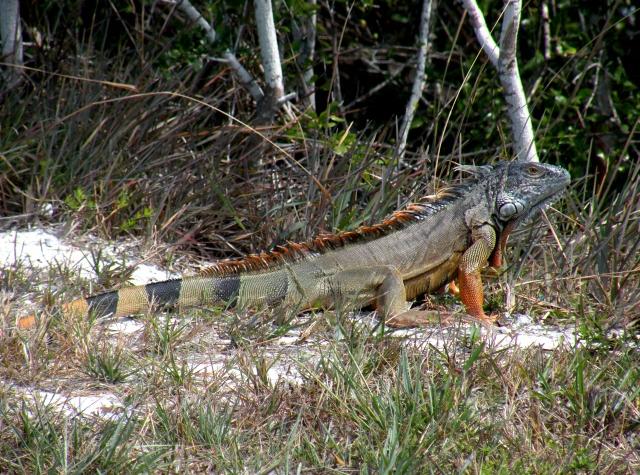 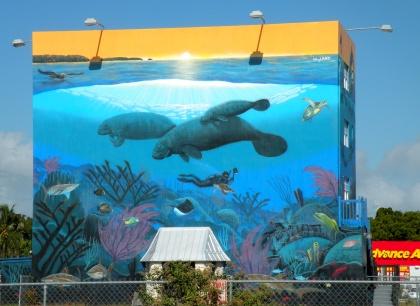 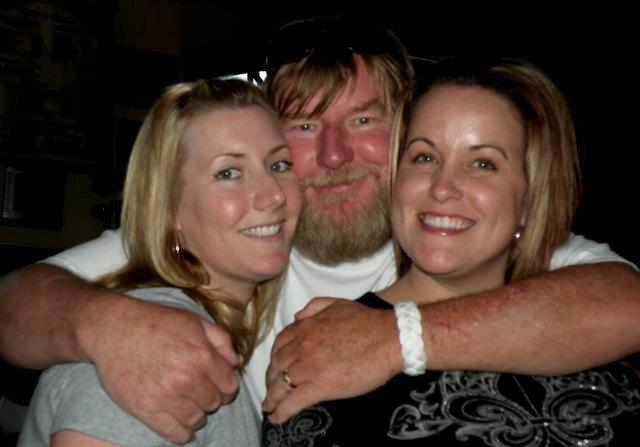 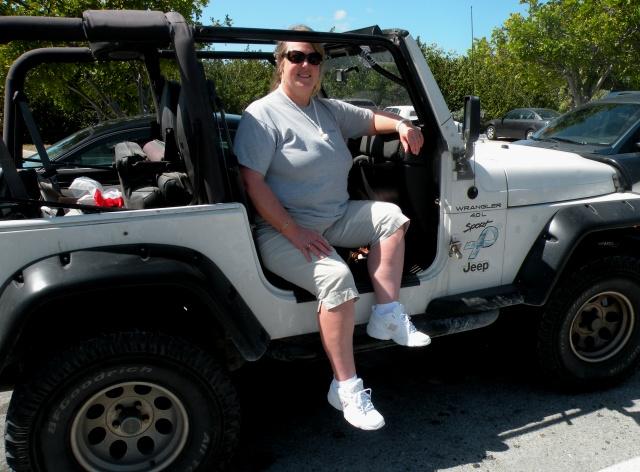 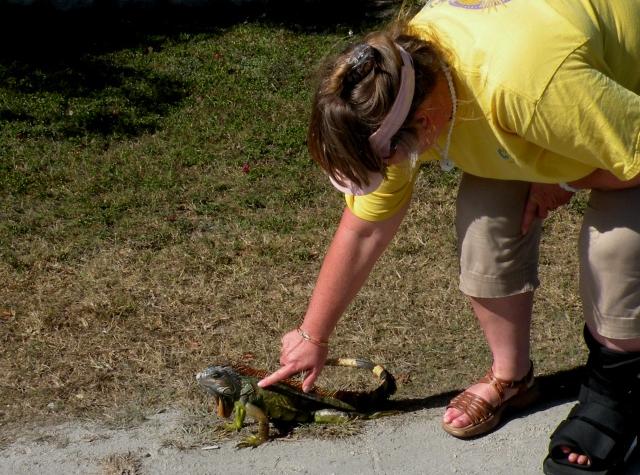 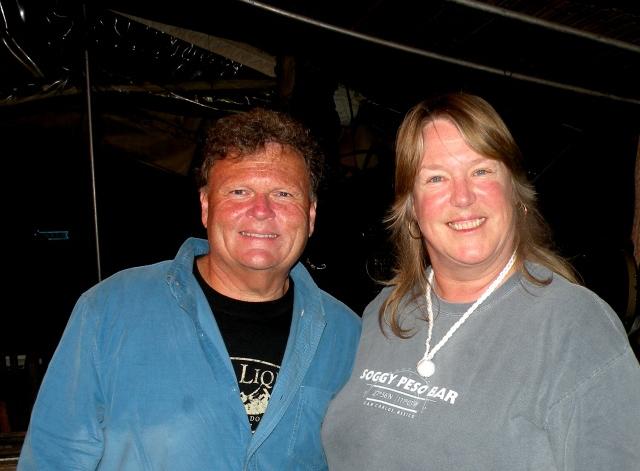 In the 6 years we have owned this motorhome, we have never encountered anything high enough to scrape the front end.   I am now taking bets on how long these horns will survive.   Our friend, Turk Sims, wrote to tell us about a local musician we should catch if he happens to be playing during our stay.   As luck would have it, Scott Kirby was playing at the Hog’s Breath Saloon last night so we dropped in to listen . . .

The newspaper was running pictures of frozen birdbaths and interviews with olde timers who have never seen it this cold since the last Ice Age while a local demonstration in support of global warming was cancelled due to the adverse weather conditions.   We heard that Al Gore was supposed to attend this year but had to cancel because the wings of his airplane began icing over just south of Key Largo.   My bride has been busy of late shopping on the internet for yet another new computer, our fourth.   Not to be outdone, I bought a set of train air horns for our Jeep only to discover that I had already crammed so many after-market gadgets into the engine compartment that there was no longer any room for the horns and air storage tank.  So . . . 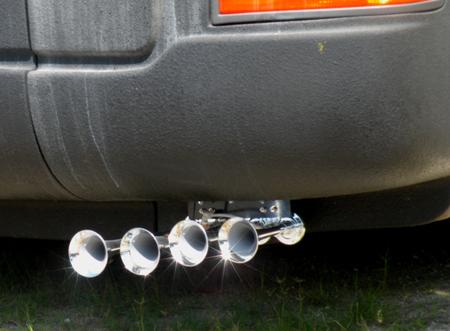