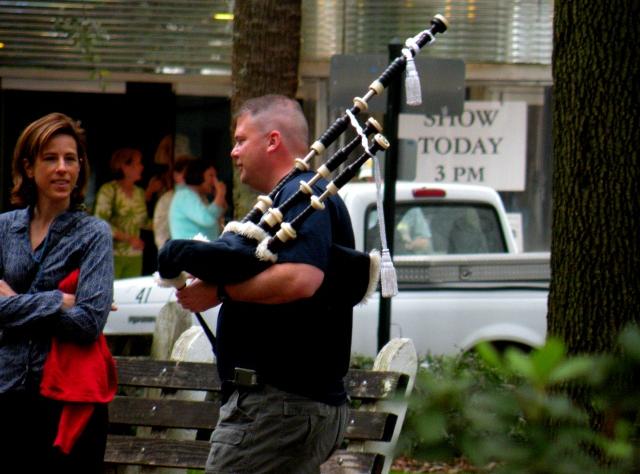 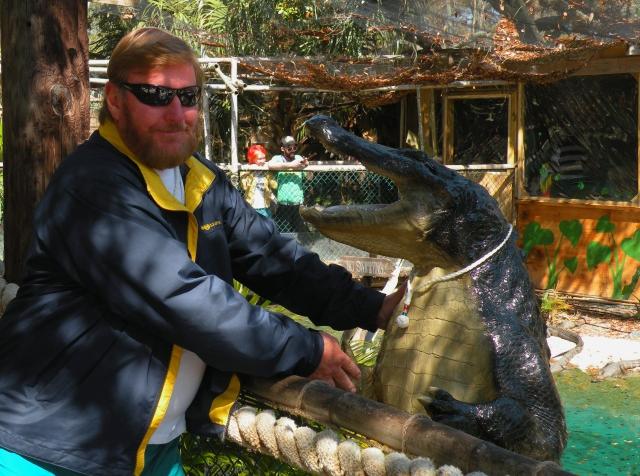 With our new President busily cancelling research on new weapons systems as well as some others already in production, I wonder if this model from Fischer-Price is one of those considered harmless enough to keep.  It has been rumored that Radio Flyer is developing a pedal powered aircraft to replace the recently released FA-22 Raptor which is so effective that it denies an enemy an equal opportunity for victory in combat.  Savannah hosts a huge Rugby tournament during the week leading up to Saint Patrick’s Day and teams come from as far away as Ireland to compete.  We ran into the team from the Combined Irish Prison System at one of the pubs down on River Street . . . 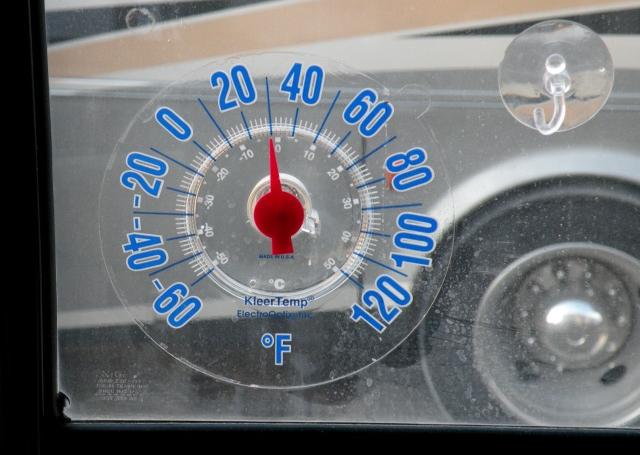 We had no idea that they would go to all this trouble just to change the transmission fluid, but I AM the one paying these guys $300 to do the deed rather than crawling underneath it myself!   Our path from Key West took us through America’s oldest city, St Augustine, Florida . . .

I still have some difficulty with grown men wearing skirts.   I suppose that if this type of behavior is tolerated it should also be expected that someone would even paint their pet... 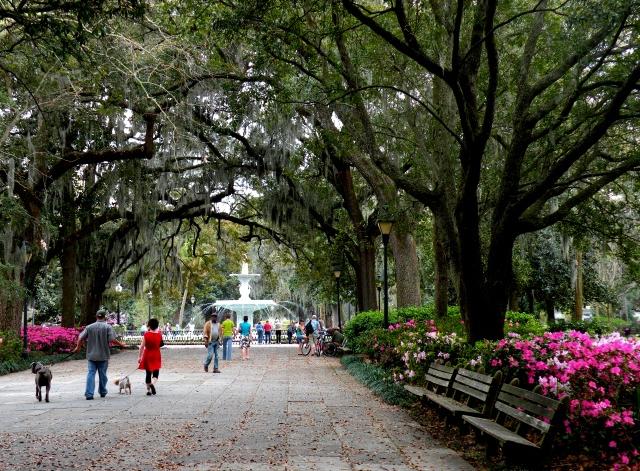 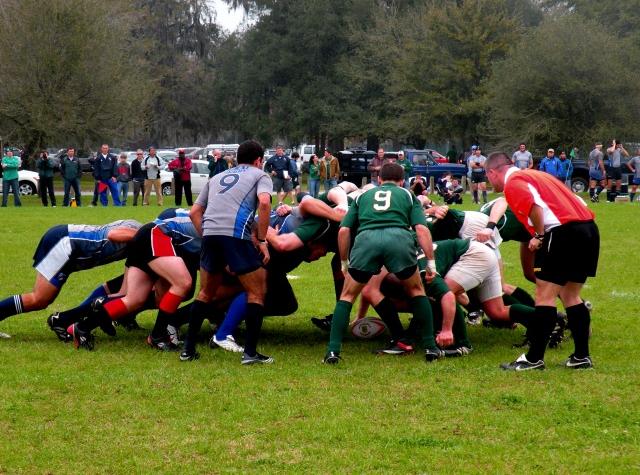 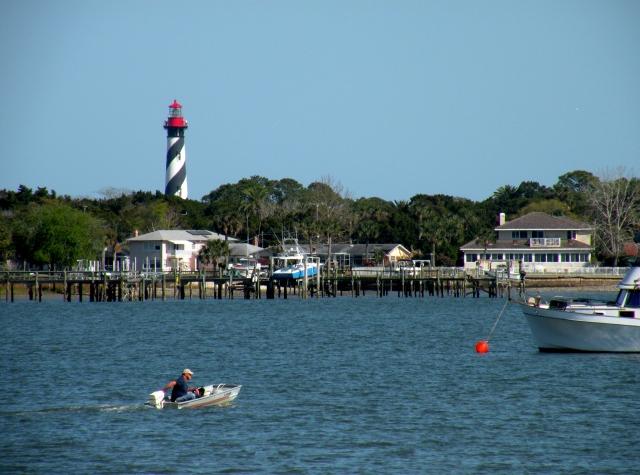 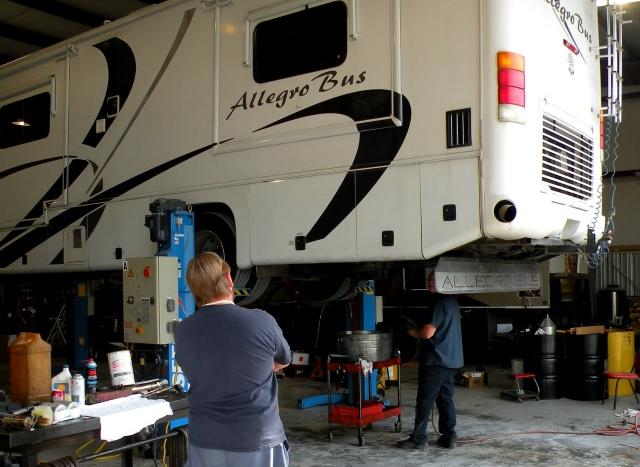 Forsyth Park is home to this magnificent fountain with water that is dyed green each year in honor of Saint Patrick’s Day . . .

I believe that Doug is one of those rare folks who have actually been “over the rainbow” and is on a first name basis with many of the inhabitants of Munchkinland.  His artwork certainly displays a creativity from somewhere beyond the confines of gravity.  We presented him with one of our bracelets and a necklace after he expressed an interest in them and then put him through the ordeal of listening to my usual shtick about the origin of the Turk’s Head knot and bracelet and shipboard use of the Monkey’s Fist.  Our final stop on Tybee Island was at the Crab Shack restaurant where I had to deal with a customer who was dissatisfied with a previous necklace purchase . . .

Pay particular attention to the “banjo” fish in the lower center of the picture. The genius, or madman, behind this collection is Doug Jones . . . 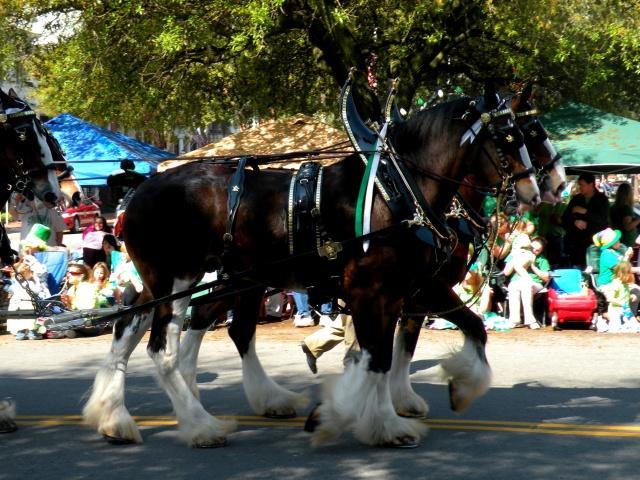 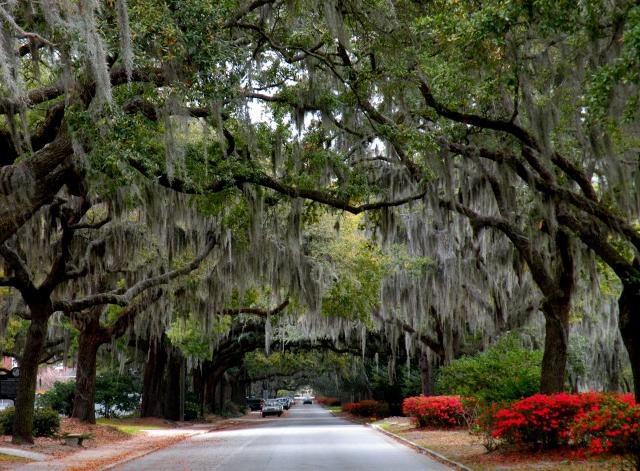 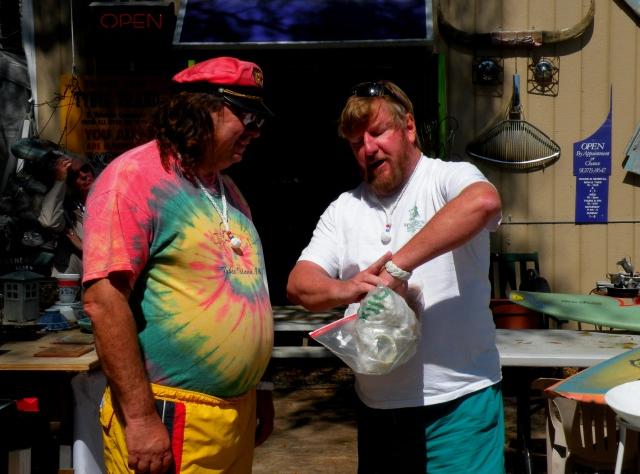 We are simply trying to maneuver through the snow drifts from one shop to another so we can get all of our maintenance completed as quickly as possible and move on to warmer climes . . .

This portrayal of the “man in the red suit” actually borders on blasphemy!  Fortunately there are some Saint Pat’s traditions that I wholeheartedly approve of, such as the Budweiser Clydesdales putting in a parade appearance . . .

This was the second time we have been here and on our previous visit we climbed the hundred or so stairs to the top of this lighthouse.   They must have done some remodeling between visits because they now have in excess of a thousand stairs to get to the same place . . . at least that’s the way it looked to us!   We skipped the forced march and went out to lunch instead.   Our next layover was in Savannah, Georgia.  This is one of the more picturesque places that we visit where simply driving down the street is enjoyable . . . 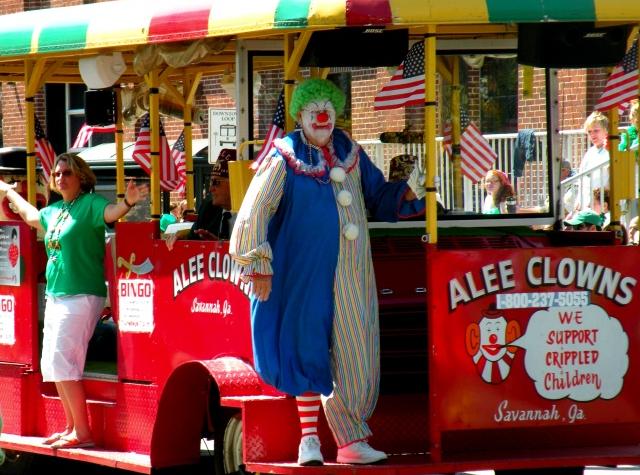 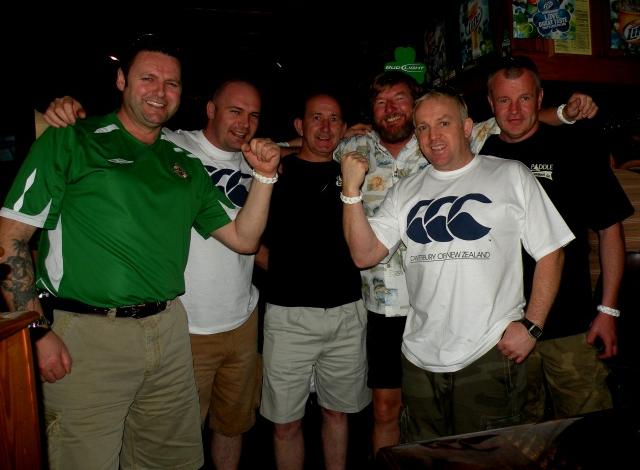 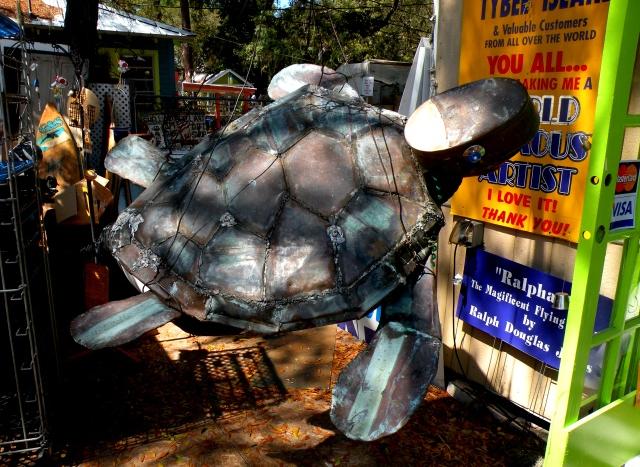 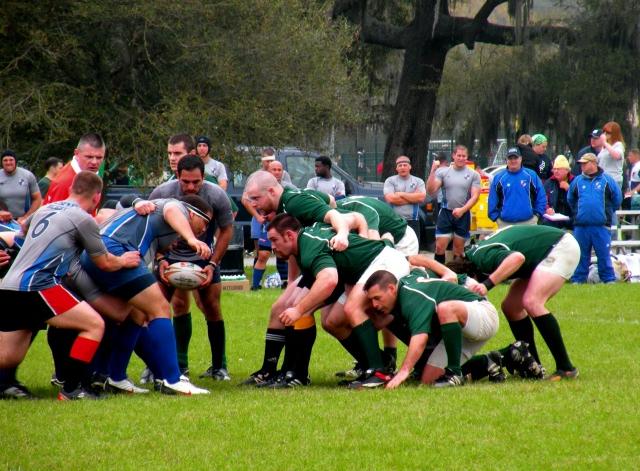 Other than death and taxes, our annual appearance at Tiffin Motorhomes in Red Bay, Alabama, is one of life’s absolutes.   Whether it is for routine maintenance or the occasional emergency item requiring a speed run that brings us here, we always seem to end up in the land of red dirt, bay trees and that enticing dog food aroma in the air.  Nothing much ever seems to change around here and you can always count on seeing the same people and businesses that were here on your last visit.  At least that’s the way it used to be!   Now, with all of this global warming running rampant through the land and temperatures reaching levels that have never before been experienced this far south, the local hardware store has become the southernmost Polaris Snowmobile dealership...

We gave these guys some of our Turk’s Head bracelets and Monkey’s Fist necklaces and they presented me with a pin from the Royal Ulster Constabulary which grants me honorary status as a prison guard  (I am really looking forward to exercising my new authority to lock up my brother-in-law). . . 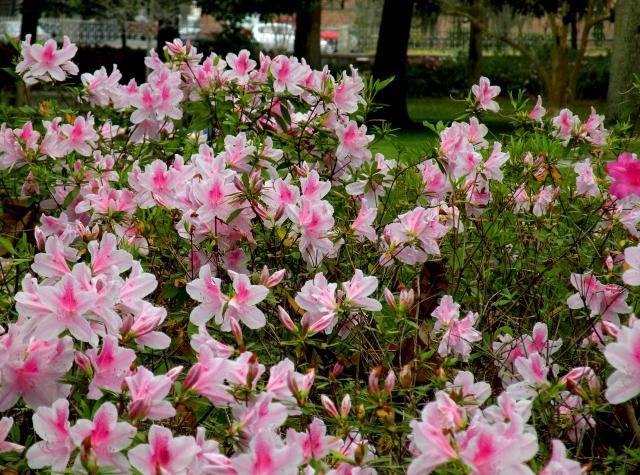 After a lot of growling and hissing, he turned out to be a reasonable guy once we promised to leave the island and never return.  And so, with a variation of that promise, we will leave you for the time being, BUT we will definitely be back!!   See y’all next month.  Hugs, Chuck and Zookie 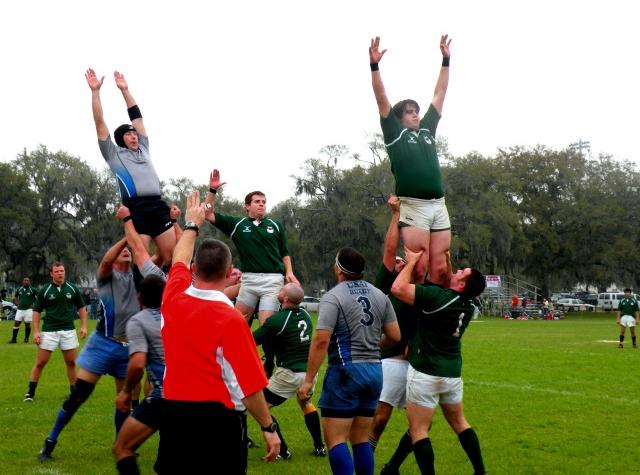 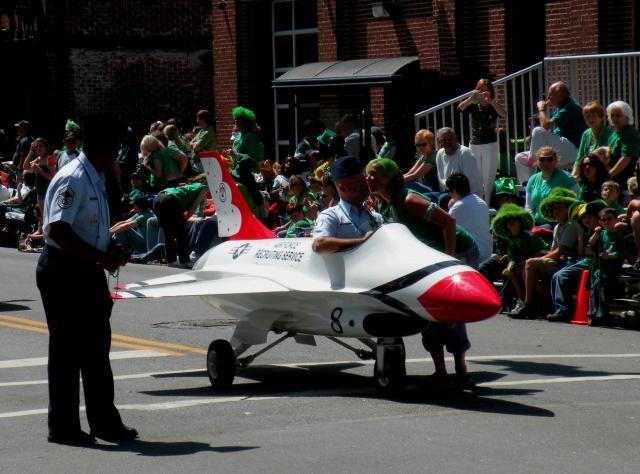 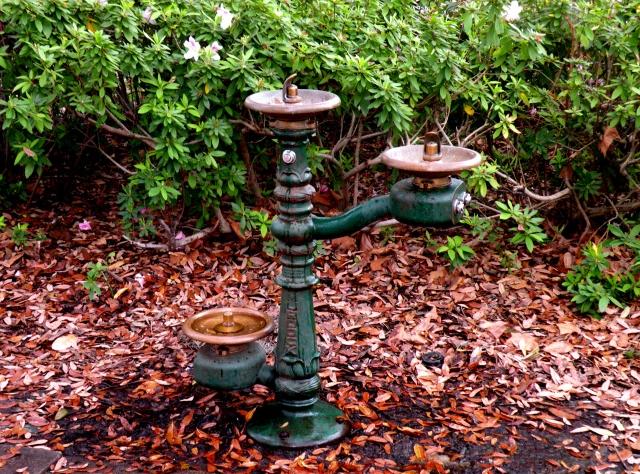 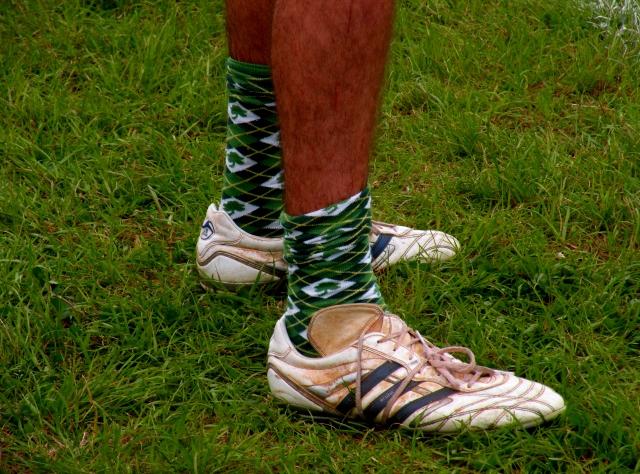 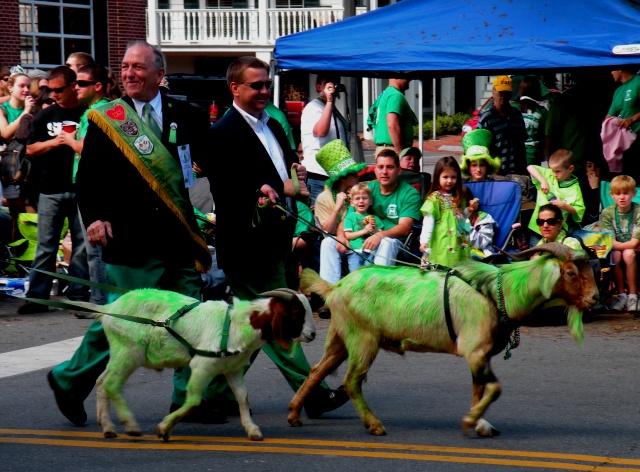 Here again, David is a key player as he is able to scurry under and between all the sweating behemoths to retrieve the ball.   My Bride, the consummate sports fan, somehow managed to find something of even greater interest than the organized mayhem unfolding before her . . .

David is actually light enough that his exuberant teammates occasionally get him up so high that he has taken to wearing a red blinking light on his head to warn off low flying aircraft.   Another rugby play which consists of the opposing teams facing off against each other in a crouched position is called the “scrum” . . .

She has this thing for “interesting” socks.  As our days in Savannah were drawing to a close, we drove out to nearby Tybee Island for lunch and, instead, came upon some artwork at a roadside gallery which seemed to call to us . . .

Of course, come parade day, it seems like EVERYONE owns a set of pipes and they come from as far away as New York to play them . . .

The bizarre marine life we discovered here is proof that one man’s trash has the potential of becoming another man’s masterpiece and nearly anything can be utilized to serve some artistic or otherwise useful purpose (except, of course, for my brother-in-law, who suffered a life altering badminton injury as a child which resulted in irreparable damage to his hair follicles) . . .

In fact, I believe that this is perfectly normal behavior for anyone who would keep a goat as a pet.  But the line has to drawn somewhere and I have drawn mine here . . . 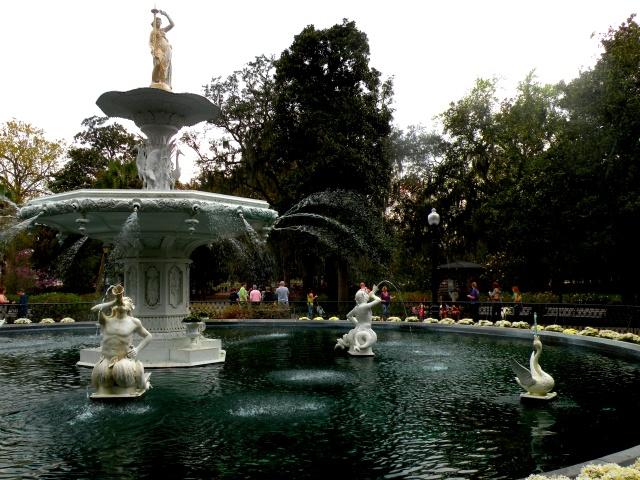 One of the players then rolls the ball between the teams.  This is the signal for all Hell to break
loose . . .

As well as members of The Shrine showing up on their motorcycles, dune buggies and clown cars . . .

There are other fountains available where you can get a cool drink regardless of your size or
species . . .

This is David making the presentation.  Being the shortest and lightest member of his team, he is the player who is hoisted into the air to catch the ball on a maneuver called a “line out” . . . 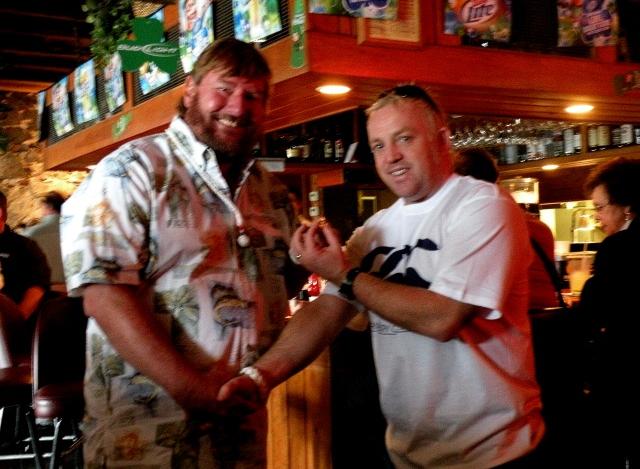 City parks are also found in abundance throughout Savannah . . .

This is one of the scariest looking clowns I have ever seen and actually sparks visions of the evil clown who lived in the sewer in Stephen King’s book, “It.”   A tradition with all Saint Patrick’s parades is young girls with green hair running out to plant a kiss on the parade participants.   They have taken it to the extreme here in Savannah and the girls actually go after low flying aircraft . . . 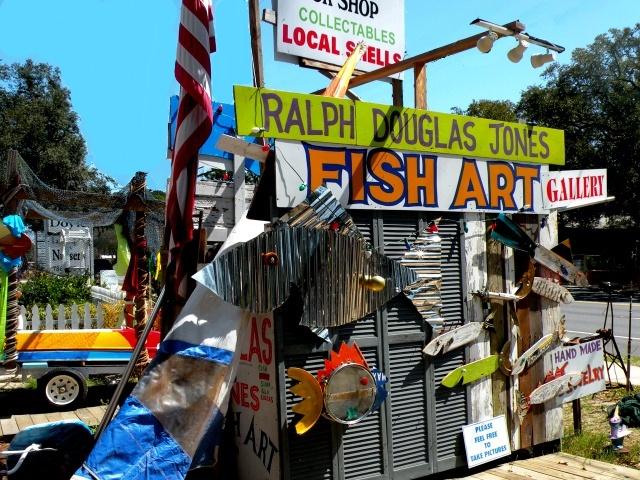 The oak trees draped in Spanish moss are more abundant here than any other place we have been.  The City is also very conscientious about planting and maintaining flowers and shrubbery along many of the thoroughfares . . . 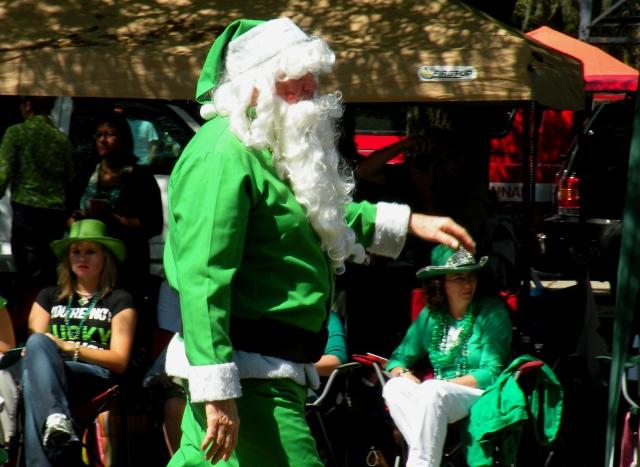 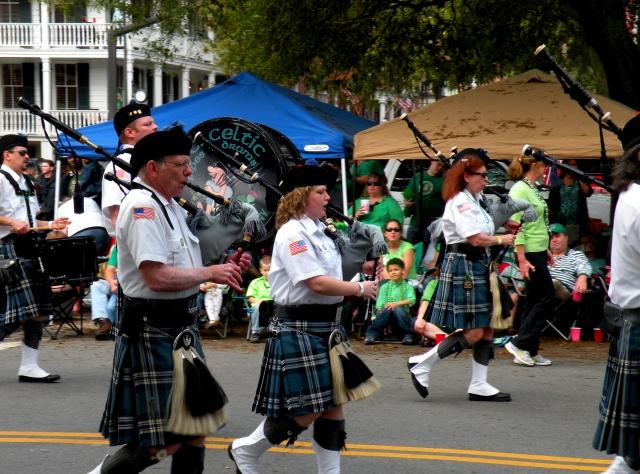 The canine portion of this fountain gets quite a workout as nearly everyone owns at least one pooch which they enjoy parading through the park.   Savannah hosts what is billed as the best Saint Pat’s parade to be found anywhere and in the days leading up to parade day, you will run into the occasional bagpipe player honing his skills in preparation for that one day when he can play the damn things without ending up in jail on some nuisance complaint . . .