In times past we have attempted, and occasionally accomplished, some nearly impossible fetes of bravado . . .

Our various medical checkups went relatively well this year and my bride received news from her breast surgeon that, being cancer-free for 5 years,  her risk of re-occurrence is the same as any other woman who has never had breast cancer and her visits to the doctor have been cut from twice annually to only once.   Naturally, we were both elated and decided to celebrate the occasion in typical larger than life New Orleans style . . . 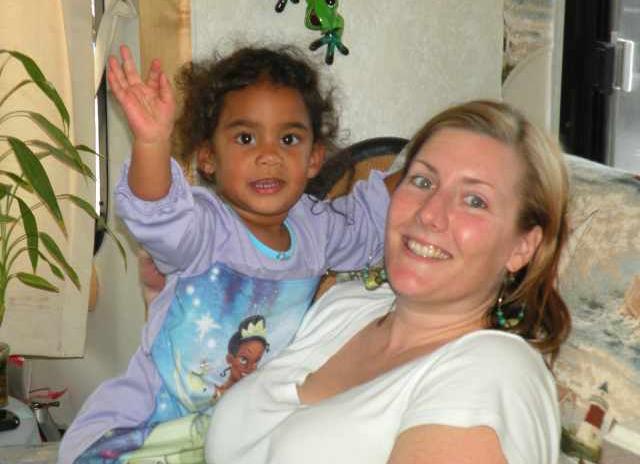 No, I have not fallen asleep in my Margarita!!  It just requires complete concentration to drink something this large without drowning in it.  Next on our agenda was the ever popular visit to “Dental Dude” for the usual sarcasm regarding my wooden implants and witty comparisons to George Washington.   My bride always looks forward to this visit with gleeful anticipation while I am filled with the dread of a man being dragged kicking and screaming to the gallows.  I believe the reason for this difference in attitude is that she likens the experience to the purchase of some new piece of bright and shiny jewelry while to me it represents a visit to the mechanic to pay yet another repair bill on a 1958 Edsel only to be told that some other critical component is about to bite the dust.  I actually find myself praying that our Jeep will be struck by some wayward comet or drop from sight into a sinkhole as we get nearer to the office.  On this particular occasion I was scheduled for a procedure called “quadrant cleaning” which is preceded by an injection of a pain killer which pushed everything twixt eyebrows and toenails into a state of hallucogenic euphoria from which some body parts, even days later, still haven’t returned.  The initial step involves a piece of equipment resembling a bent wire on the end of a stick which rotates at 30,000 rpm’s between your teeth and gums and requires a constant stream of water to prevent it from overheating and vaporizing your molars.  The process was performed by a hulking hirsute hunch-backed gentleman wearing a leather loin cloth and hood and was very similar to water-boarding.  It was a life-altering experience which cured me completely of my previous irrational fear of poisonous snakes, rabid dogs, nuclear holocaust, menopausal women and my brother-in-law’s wine.  The acid test of this new outlook came with the arrival of our somewhat left-leaning buddy from Sun Valley, Idaho, the Duck . . .

We were about 100 feet or more behind this woman when I realized that our brakes were only minimally working and I immediately lay heavy on both the brake pedal and horns (1 electric horn, 2 air horns and 4 train whistles) to warn her that we had a problem.   Residents from as far away as Tucson were reportedly seen diving into fallout shelters at what they believed to be the blast of air raid sirens!  Although our slow-witted fellow traveler was stopped some 20 feet from the intersection and could have easily moved forward that far or simply pulled around the corner to avoid us, she instead sat passively in her car, both feet on the brake, watching in her rear view mirror as our 20 tons of horn-blaring vehicle approached and then clobbered her ass end in slow motion.  We later learned that she has a history of neck and back problems and may have simply been looking for a big payday.  Thank God for insurance companies to deal with this sort of nonsense.  In my 50 year driving history, I actually test drove the first Model-T for Henry Ford, this is the first “at fault” accident I have ever had.  We are once again in Los Angeles and comfortably nestled beneath the outgoing runways for the jumbo cargo jets heading westward over the Pacific at Dockweiler State Beach.   When we first began staying here 5 years ago, they had an occupancy rate of over 90%, seven days per week, at $35 per night.  Due to the current economic climate, they have raised their rates to $65 per night and this is what the place now looks like with 18 sites out of 118 occupied . . . 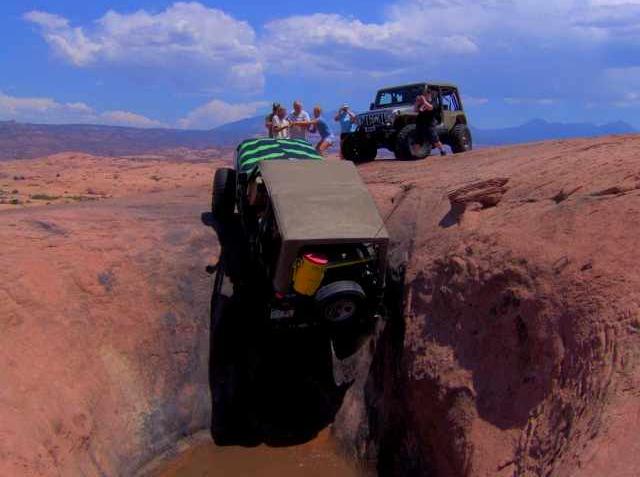 California politicians have been spending money they don’t have on programs we don’t need for years.   They are now being forced to raise the costs or taxes of successful government run and private businesses, resulting in failure or bankruptcy, to pay for the things they already know won’t work.  This process sounds much like what the federal government is now doing and expecting a different result.  Come November, remember the “DRIP” rule: Don’t Re-elect Incumbent Politicians!! Meanwhile we have been wrangling our 2 and 3 year old grandkids, Melvin Sugar Bear and Melvina Honey Bear between a marathon of visits to the small army of medical professionals we require to continue breathing and remaining in a semi-upright position (more on that later).  As it happened, on this particular visit we arrived in LA on Easter Sunday with a Jeep-load of chocolate eggs, toys and a variety of plush playmates for the kids (bunny on the left and kid on the right) . . . 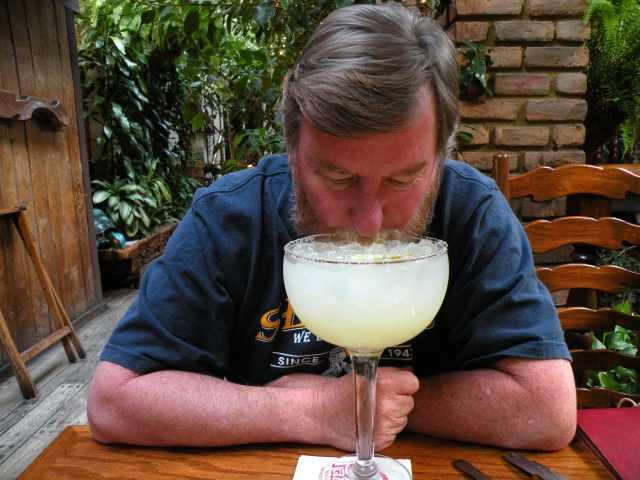 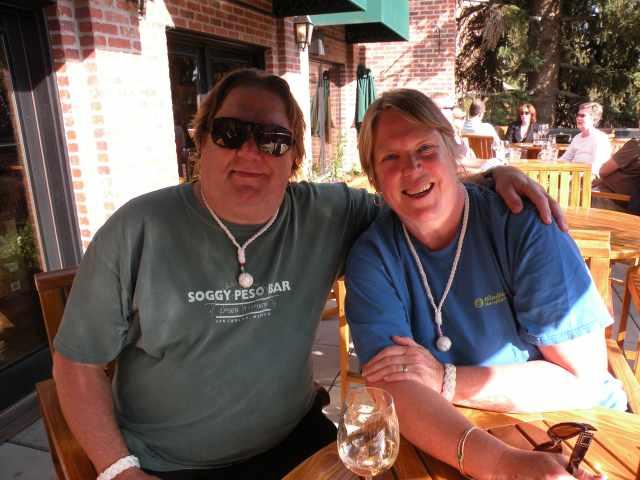 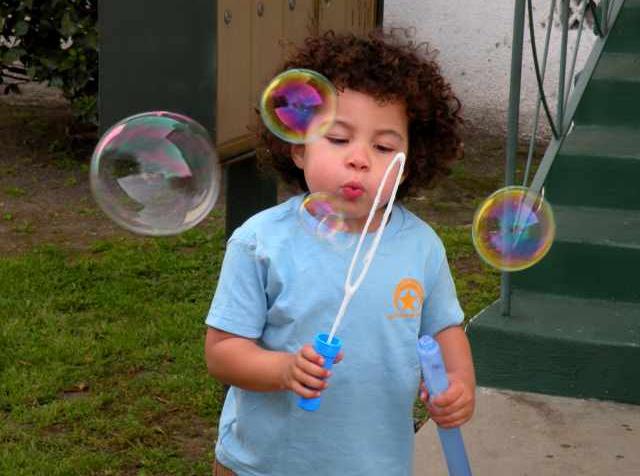 Although we are mortal enemies in the world of politics and religion (He is a Castro-esque Buddhist while I am a Druid Reaganista), we have forged a friendship based upon food, fun, wine and bullshit.  Thus far, it’s worked quite well!  Our Urban Assault Vehicle is now fully fueled and pointed northward toward the Zimmerman Fly Farm and the enclave of the “Nordic Gnome” aka: the brother-in-law.   With any luck, we should be able to safely thread our way through the Los Angeles freeway system without a close encounter of the worst kind with any of the locals who all drive with a cell phone in one hand and a mascara brush in the other while balancing a cup of steaming coffee on their knee.  Ya gotta LOVE California!!!  We’ll see y’all next month!  Hugs.  Chuck and Zook 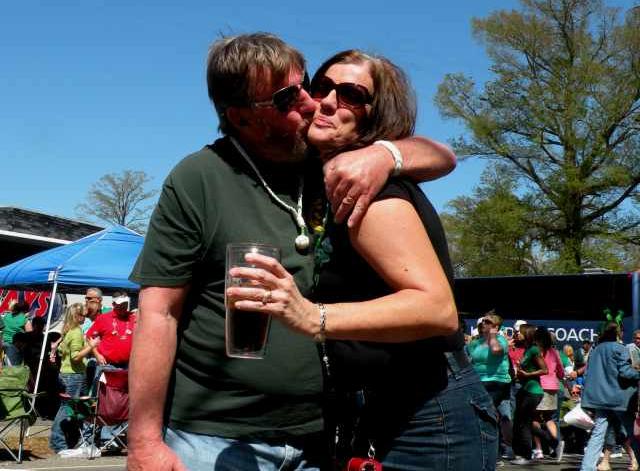 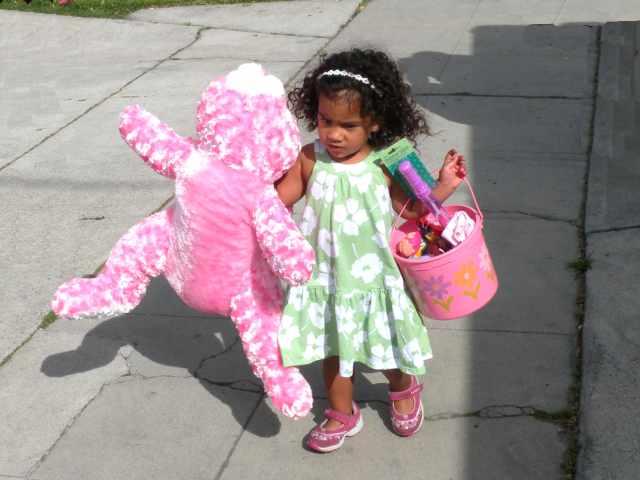 This “chubby chaser” followed me around for hours before I finally caught her!  My bride, already in possession of enough beads and other parade throws to sink a small Caribbean island, promised that she would drag no further booty home to be stored in our already bulging basement . . .

It’s true, I’m afraid; we really do plan our travel around well known or recommended restaurants!  Lockhart is known as the “Barbecue Capital of Texas” and Black’s is the oldest family owned restaurant in town.  These guys grill just about every critter found under the Texas sun and are renowned for their home-made sausage.  We carted off several hundred pounds of their chicken, brisket, sausage and armadillo to stock our rolling smorgasbord of Texas BBQ and fixin’s which we savored as far as the New Mexico State line before it had all mysteriously vanished.  The next destination along the trail was to be in Phoenix for a week of upgrades on our Jeep in preparation for our summer foray into the “Last Frontier,” more commonly known as Alaska.  As it turned out, our week in Phoenix was spent having our land yacht repaired after a brake failure in Mesa left us sitting in the trunk of the vehicle in front of us at a traffic signal . . .

These women simply have no shame and I, like my Irish brethren, am very much aware of what it is like to be hounded by the masses of forlorn and desperate females in search of the cheap thrill associated with the laying of lips on an inebriated Irishman on Saint Paddy’s Day . . .

HAH!!  I knew that was a pie crust promise, easily made and easily broken, the moment I heard it!  She is now enrolled in Beadaholics Anonymous and has been bead-free for nearly 2 weeks.  I am just so proud of her!  Having survived our winter hiatus in the Big Easy, we folded the tent, caged the livestock and began our westward trek from New Orleans on March 20, driving just far enough into Texas to be in position for a lunch stop in Lockhart, home of Black’s Barbecue, the following day  . . .

This activity not only provided entertainment for his bubble-entranced little sister but was additionally pre-soaping both of them for their evening bath.  Honey Bear was so sticky by the end of the day that both she and her grandma had to be hosed down to separate them!   Our youngest daughter flew in to LA from San Francisco for a visit when she heard the grandkids were in possession of a mountain of Easter goodies that she might be able to sink her teeth into . . . 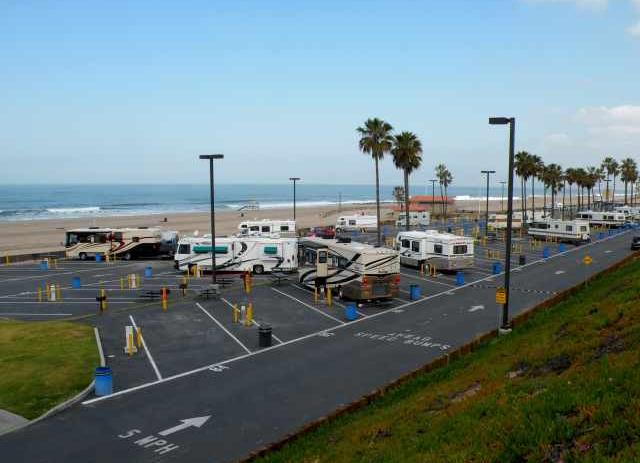 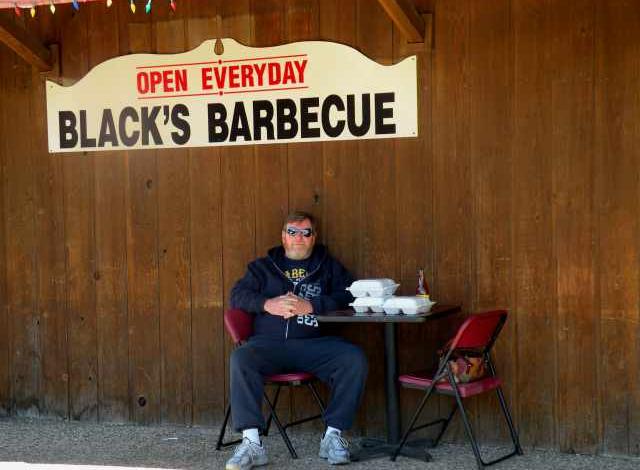 We were only traveling at 3-4 miles per hour when this happened and the damage to our home, though minimal, took 5 days in the shop and $5,000 to repair.  The car we crunched looked a little worse . . . 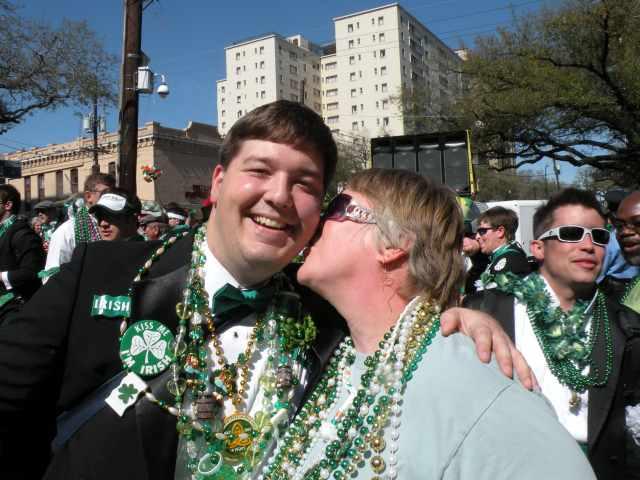 But they were nothing when compared to a Lenten vow to refrain from attending parades while in New Orleans; a vow that was further complicated by the arrival of Saint Patrick’s Day and the subsequent gathering of several million Irishmen and faux-Irishmen on every street corner and in every bar in the City, an abundance of green beer at ridiculously low prices and wanton displays of affection by all three genders.  The lengths to which some folks will go, including vaulting a police barricade and crawling beneath the bellies of a cadre of mounted police officers, merely to kiss an Irishman in exchange for a paper flower or some other worthless trinket is truly amazing . . . 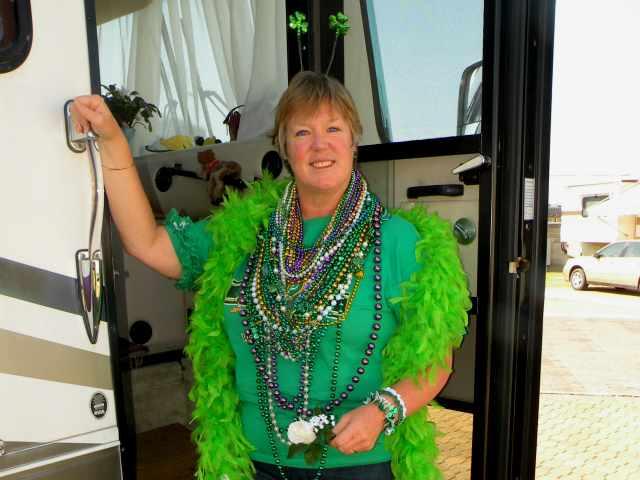 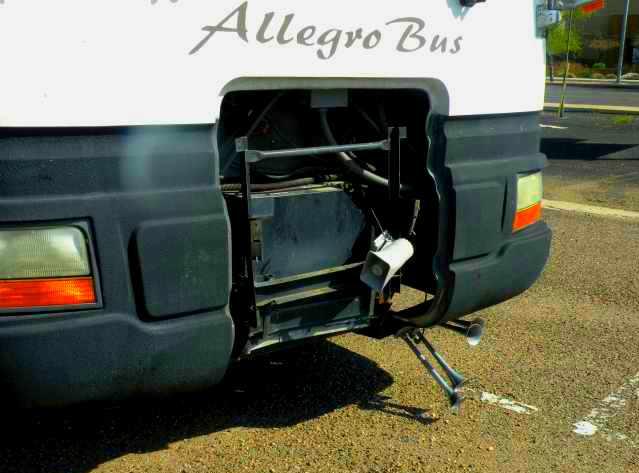 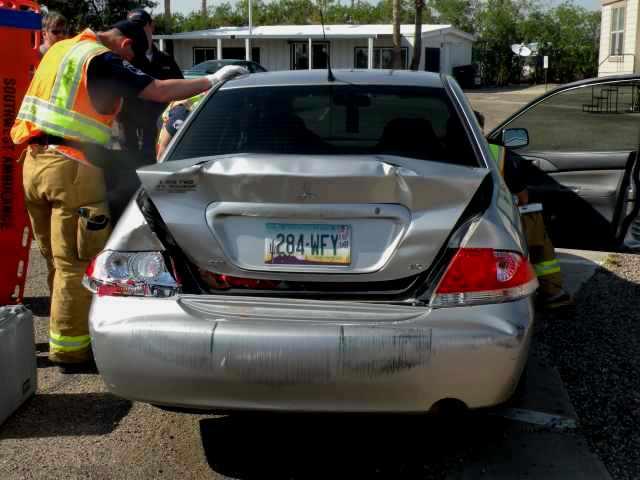 Sugar Bear quickly lost interest in the mountain of sweets and newly arrived grandparents and spent most of the afternoon exploring some of his more interesting bunny booty . . .