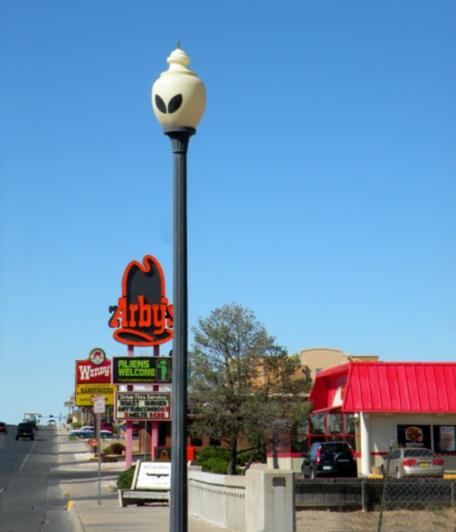 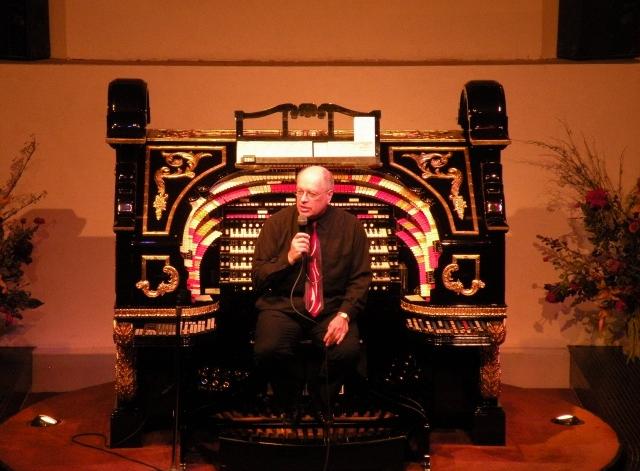 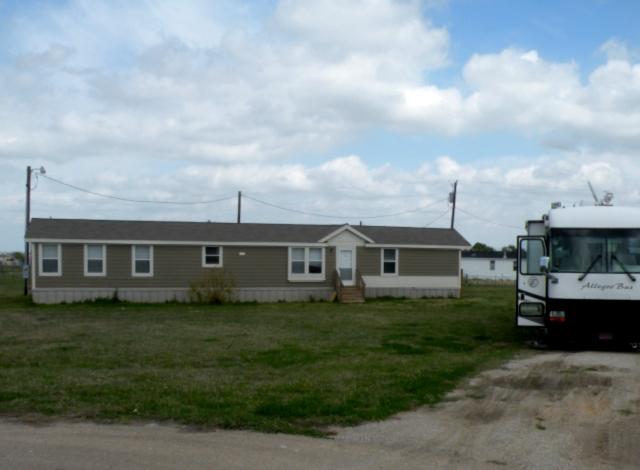 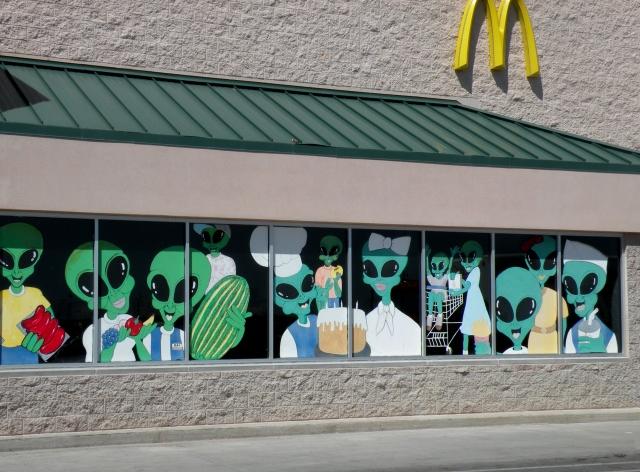 I am not usually the suspicious type, nor do I ascribe to many conspiracy theories, but when I run into a field of these things as far as the eye can see, in an area abundant with tales of UFOs and alien landings, it does spark just a twinge of curiosity . . . 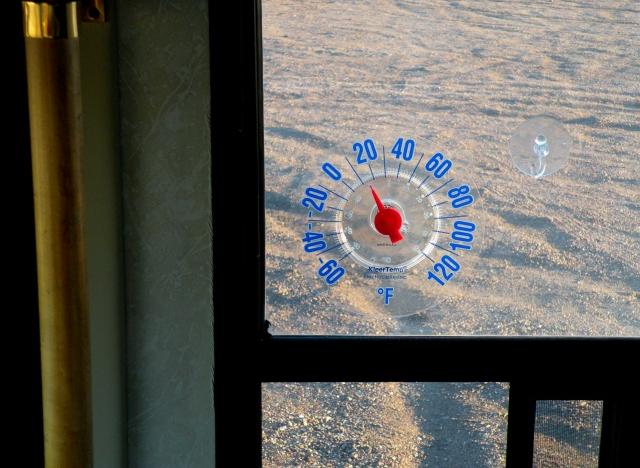 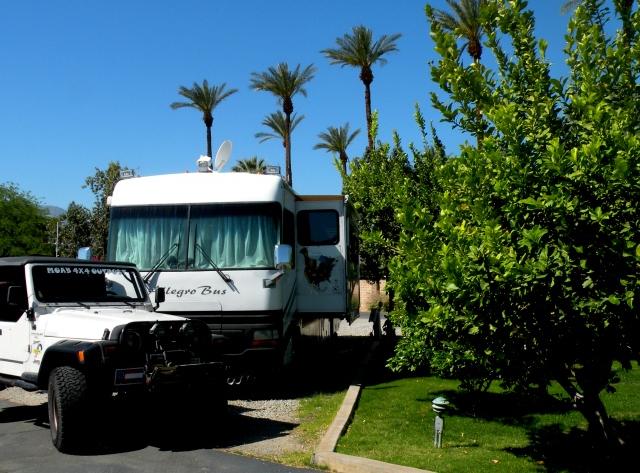 McDonalds has even gone so far as to post photos from an earlier gathering of some other-worldly burger aficionados . . .

We have always had a knack for locating biker and cowboy saloons and the Rusty Spur definitely fell into that category.   They have live entertainment and food throughout the day for the tourist crowd but lose the food around dusk as the rowdier folks begin to mill about.   One place that stays “family oriented” day or night is Organ Stop Pizza in Mesa . . . 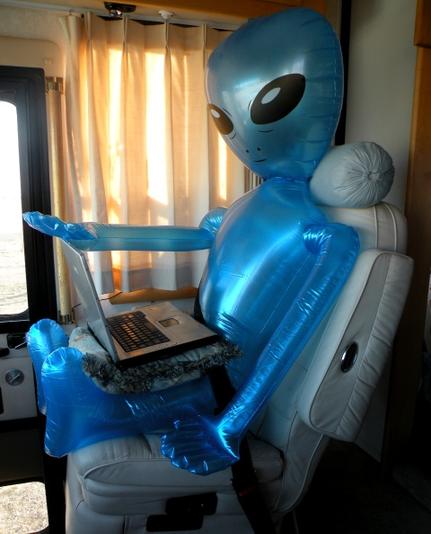 Rumors run rampant throughout the area of kidnappings of humans by a few of the less scrupulous “illegals” and the return of aliens in the form of the kidnapee.  I nearly fell victim to this alien bait and switch scam but became suspicious of my “navigator” when she began communicating with our laptop through a series of eye blinks . . .

Upon our departure from Red Bay, Alabama, we completed a virtual speed run across Mississippi and Arkansas only to find ourselves, once again, in the Lone Star State.   Anyone who has ever traversed Texas in an east to west or west to east direction knows that you will pass through some of the most desolate and wind-blown territory on the planet.  This is called West Texas.  Our path on this trip carried us through the Dallas-Ft Worth area and into Justin to visit a brother from our time together in the Renegades Motorcycle Club . . .

I may just have to re-evaluate my thoughts on this entire man-made global warming thing and pay closer attention to those folks running about screaming at the top of their lungs, “THE SKY IS FALLING!! THE SKY IS FALLING!!”   We arrived to temperatures in excess of 100 degrees and sweltered through the heat for the next 3 days before it finally cooled off to a pleasant 90 degrees or so.   The headline of our local newspaper confirmed my suspicions declaring that they haven’t recorded temperatures this warm since April of 2008 and 2007 and 2006 and 2005 and 2004 and 2003 and . . .    Yep!  I am now a believer.  We’re DOOMED!!!!!!!  DOOMED!!!!!!   Next stop: Los Angeles.  See you soon.  Hugs, Chuck & Zook (I think it’s her??)

Not to worry though!  Our new friend did promise to return our Jeep in a couple of particks with an “improved drive train and lift kit.”   I’d be a lot more excited about this entire event if I could only figure out what the Hell a partick is.   Over a span of some 60 years, our government has continually denied that any alien landing occurred at Roswell.  However, as you travel west from Roswell toward Arizona, you encounter this . . . 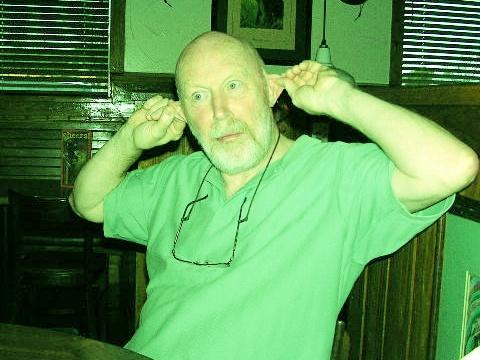 I figure he is either competing with Stonehenge or preparing for one hell of a campfire!   Phil and Sandy may actually be closet Druids harkening back to those days of yore but circles of stone nowadays are more closely associated with “crop circles” and extraterrestrial life forms . . .

This particular cold snap led to the explosion of the filter on our fresh water pump and the creation of an ice skating rink in our basement.   My bride, being of sound North Dakota Norwegian stock, eased the tension of the moment by reminding me that it still wasn’t as cold as a winter in Fargo.   Okay, but APRIL in the freakin’ desert!!??   After a heated, but brief, discussion regarding the wisdom of buying new ice skates for what promised to be a very short-lived skating season we set out to explore Old Town Scottsdale whilst our motorhome thawed . . .

I had assumed this to be some kind of a racing craft but was informed that it is simply a pleasure boat that the owner uses on weekends.  What a life!   A couple of hours later found us searching for a cold beer in Palm Springs, California . . .

I mentioned to Phil that our motorhome was the nicest improvement he had thus far made to the place . . .

Phil (he’s wearing the bandana, I’m the guy in the red shirt) has recently retired from the nine-to-five work force and has begun a new career working for himself as a motivational speaker (www.philhaun.net  “Are your Mondays as good as your Fridays?”).  The only “motivational speaking” Phil ever did when we were Renegades was to “motivate” the Hells Angels to let us out of various places and situations in one piece.   He and Sandy along with their horses and hounds recently purchased a patch of ground which they affectionately call the “Diashaun Ranch” . . . 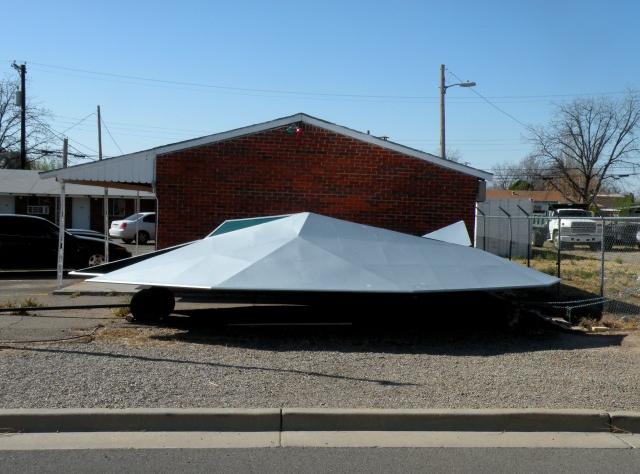 Our journey through New Mexico landed us, once more in Tempe, Arizona just in time for another example of man-made global warming gone wild (I’ve always enjoyed the “Girls” videos of a similar name) . . .

I just cannot get over how much this guy looks like Dick Cheney!   My grandchild deprived traveling companion managed to get a surrogate grandkid “fix” by snagging a passing child for some grandma snuggling . . . 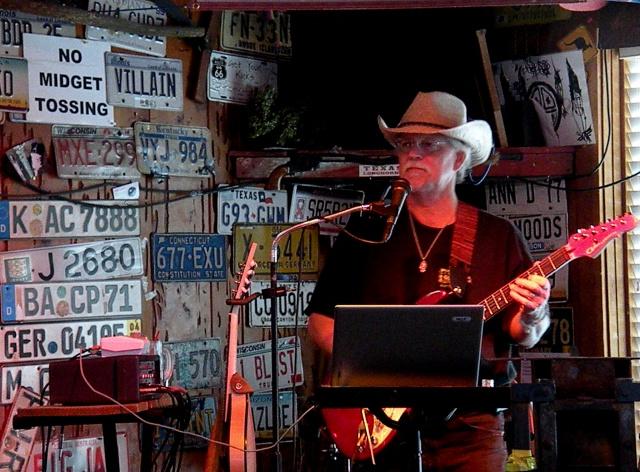 If true, these stories would go a long way toward explaining a few of the peculiarities I have observed on this planet; my brother-in-law, for example . . . 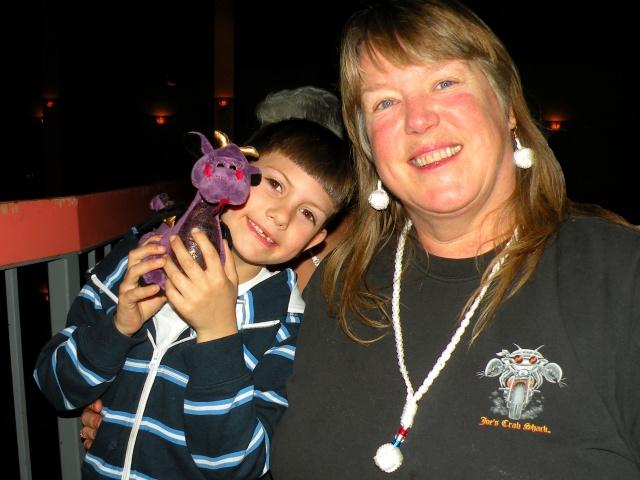 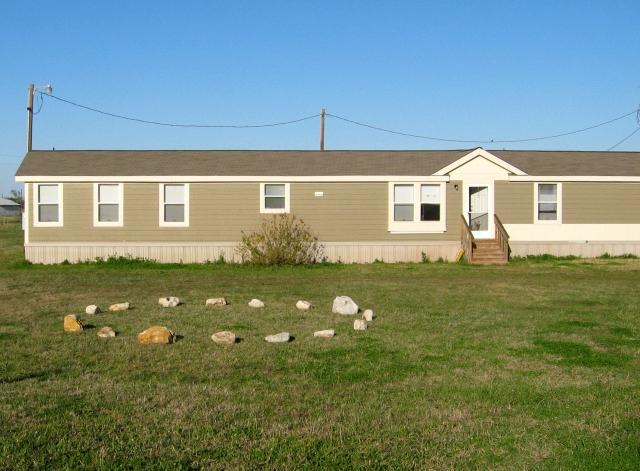 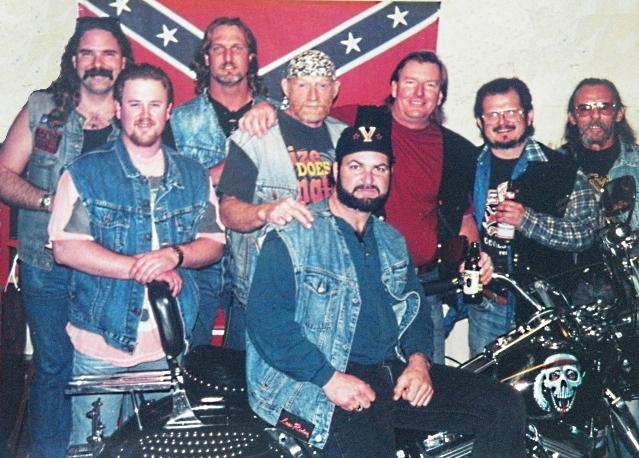 Soon after we left, he sent us a photo of an “improvement” he completed which he believes to be an adequate replacement for our urban assault vehicle . . . 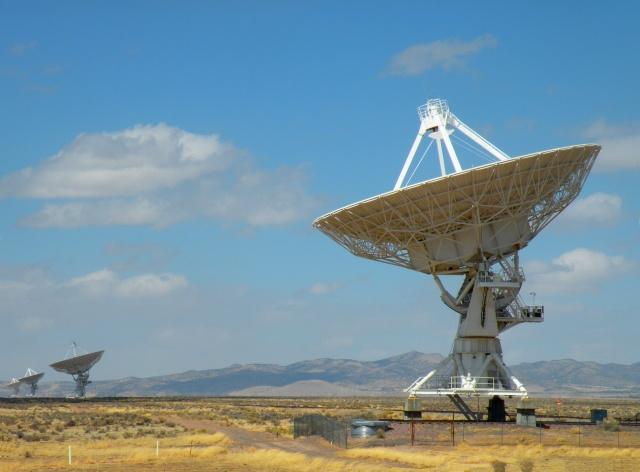 Speaking of which, we spotted this particular vehicle parked alongside a motel in Roswell, New Mexico.   Roswell has long been known for its infamous “visitation” some 60 years ago and has since adapted to and thrived on the notoriety.   Many of the local businesses are even encouraging future drop-ins . . .

It was only after several rounds of intense Khrushchev-Kennedy style negotiations, complete with our visitor pounding "her" flipper on the table and a major concession on my part, that my bride was safely returned (at least I think it’s her).  The last time we saw our little blue friend "she" was headed toward Moab, Utah, to do some wheelin’ . . .

Although the kid was really enjoying all the attention, his parents were concerned that all this nicey stuff might be the prelude to a real snatching and called in the dreaded Pizza Security Force!   After buying dinner for the kid’s parents and promising to take our future pizza cravings elsewhere, we escaped the clutches of Pizza Security and made our way back to a nearly thawed motorhome.  Heading west, once more, we made our usual pit stop on I-10 at exit 45 to fill up on fuel and propane before heading into California.   This is a good stop for you RVers to remember!   The diesel and propane prices are 25¢ to 50¢ less per gallon than other nearby places in Arizona and usually around $1 per gallon less than California.   Parked next to us at the service station was this 40’ Skate . . . 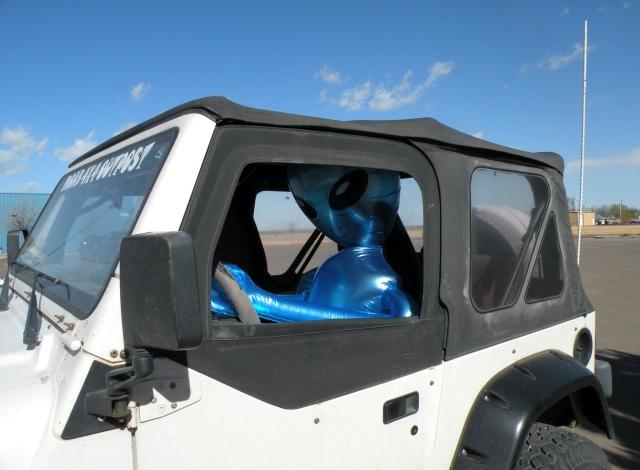 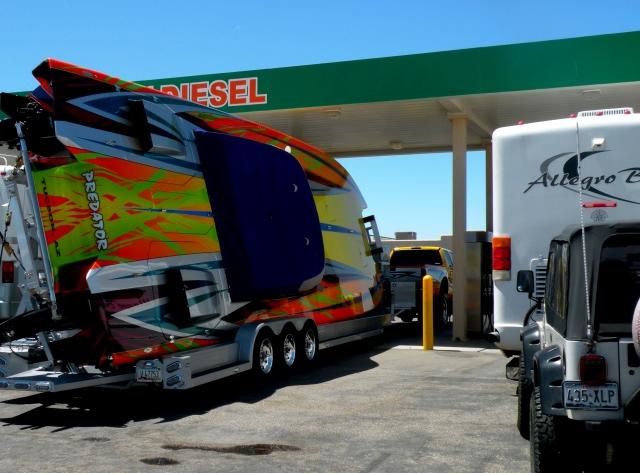 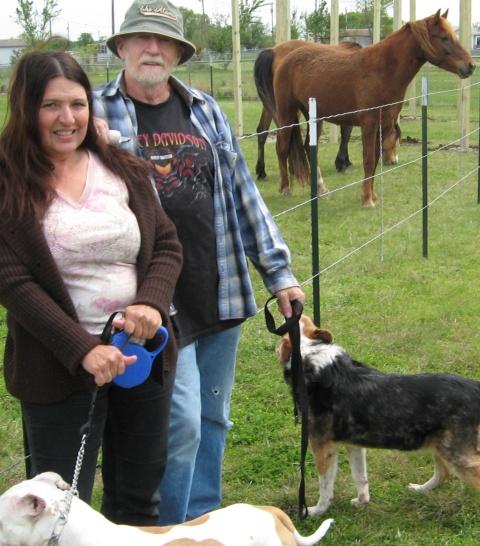 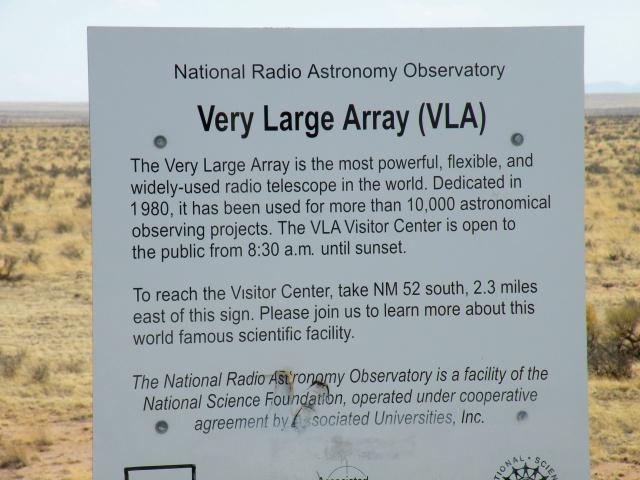