They also have a herd of real buffalo as well as one white buffalo which I was very much impressed with until I discovered the garbage can filled with several hundred empty cans of white spray paint behind “The Chuckwagon” restaurant where they, coincidentally, serve buffalo steaks and burgers.  A bite out of either of these tasty treats leads you wonder why the hell we hunted these critters at all, much less to the brink of extinction.  After leaving Zimmerland (This is North Dakota’s official state nickname as 99% of the populace is either currently named Zimmerman, was once named Zimmerman or will be named Zimmerman at a future date.  It also happens to be Kalyn’s maiden name.)  We headed across the border and into that vast wasteland called Canada.  Crossing the border turned out to be quite the experience for us “Texans.”  There seems to be something about a Texas license plate that arouses Canadian curiosity about the number of guns you must be carrying.  We had a couple of the border Nazis tearing our motorhome apart for over an hour in a vain attempt to locate our arsenal.  Thank goodness we left the hand grenades and howitzers at home this trip.  May has turned out to be a little early in the season for most tourist traps and campgrounds to be open north of the US-Canadian border and we often found ourselves driving an extra hundred miles or so because the place we were planning to stay was still boarded up for the winter.  You should definitely allow yourself some extra time if you plan to take this trip.  And, most importantly, think snow! 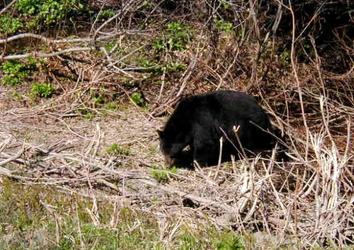 This is the Lake Louise Hotel in the Banff National Park.  It looks a lot different than this in the “summer.”  Our friend, Mike, is kind of a bear aficionado and will do whatever it takes to locate, photograph and interact with these cute and cuddly creatures . . . 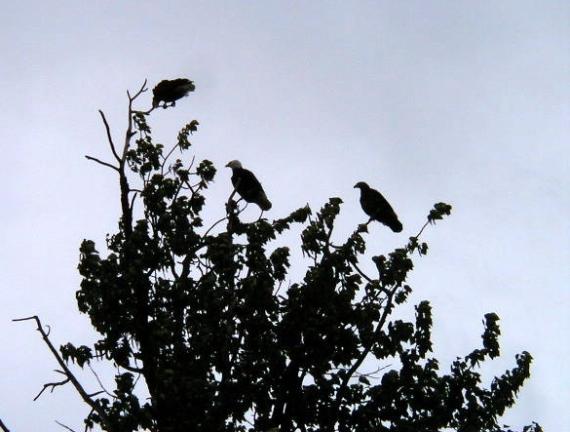 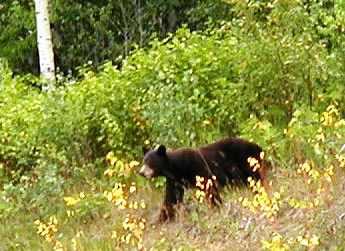 We had several interesting experiences along the way when Mike would spot a bear, slow the motorhome to something less than 30 miles per hour and leap out in hot pursuit with cameras and binoculars in hand.  This often left Flo in the rather unique position of having to bring the motorhome to a safe stop before running off the road or the side of a bridge from her place in the passenger seat.  There was one time that this situation occurred while Flo was in the bathroom.  It is absolutely amazing how fast she can move with her pants looped around her ankles.  We left Flo and Mike in Hyder, Alaska, with them heading back to California for some doctor appointments and us continuing ever northward.  We managed to cross the Canada-Alaska border again and into Alaska proper with minimal road damage.  Actually our motorhome was unscathed but our Jeep took a bit of a beating with a broken windshield, one broken headlight and one broken side mirror.  I think you just have to accept the fact that a towed vehicle is gonna get splattered with rocks.  Before reaching Anchorage, we stayed for a week in Valdez.  Valdez is nicknamed “Little Switzerland” because of its location surrounded by large snow encrusted glaciers and mountain peaks.  There were two large trees about 50 feet in front of our motorhome and every evening we would sit and watch the bald eagles and golden eagles roost there for the night . . .

This is the side of Alaska that is never mentioned in any of the travel brochures.  After leaving Alabama on April 4th, we made a speed run to Council Bluffs, Iowa, and joined up with our best buddies from California and formed a two-motorhome caravan for the trip through Canada and into Alaska.  We took turns being “wagonmaster” and taking the lead as neither couple could endure the strain of leading our “group” in one continuous circle asking the indigenous people for directions . . . 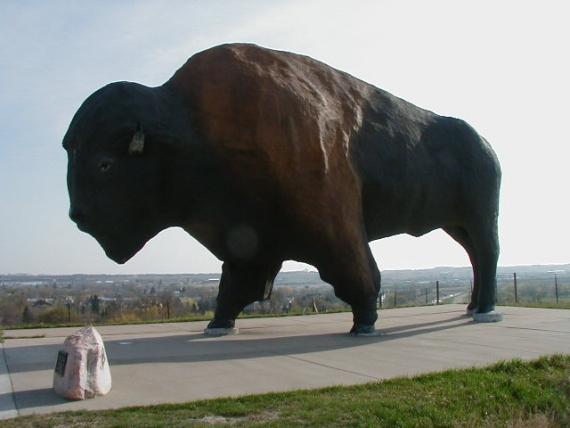 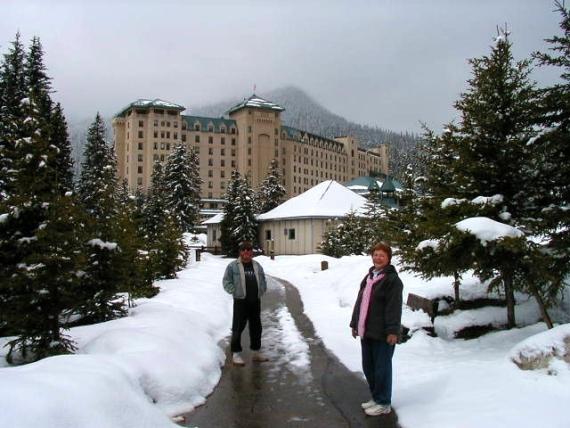 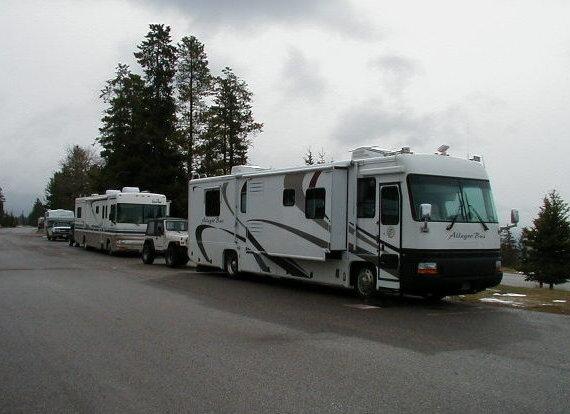 Spring came a couple of weeks early this year and the salmon had not yet returned to the local streams.  Spring salmon are a very important food source for nearly all the carnivorous wildlife in Valdez including the local eagle population.  Without their usual diet of salmon available to them, these large birds tend to clean out the local population of cats and small dogs in just a few days.  There are no stray cats in Valdez!  To help alleviate this problem, in the evening local grocers put all their outdated beef and chicken in their parking lot for the eagles.  It is pretty spectacular to see 25-30 of these large birds swooping in with talons extended and picking up large pieces of meat.  The competition for the choicest cuts is pretty intense but Kalyn usually does quite well!  Until next time, hugs and smooches, Chuck and Kalyn

Planes, trains, more planes and lawnmowers.  If Steve Martin and John Candy had made this movie instead of the one they did (“Planes, Trains and Automobiles”), it would have definitely been more entertaining.  We now find ourselves enjoying the wonder and grandeur of Anchorage, Alaska, and, more specifically, the Ship Creek RV Park.  Nestled on the fringe of the industrial district and overlooking the Alaska Railroad right of way, it is a definite stop for anyone visiting the area in an RV.  Throughout the day we have jumbo jets flying overhead and slowing above our campsite so we can enjoy the roar of gigantic jet engines.  You mix this with the sound and vibration caused by the Alaska RR trains running through our backyard, interspersed with the high pitched prop whine of float planes which buzz us at about 200 feet, then all it takes is the sputter and choking of the antique riding lawnmower used to maintain our campground to complete this picture of total harmony with nature . . .

We made one quick stopover in Jamestown, North Dakota, where I met several hundred of Kalyn’s relatives.  Jamestown is world famous for their statue of a giant buffalo . . . 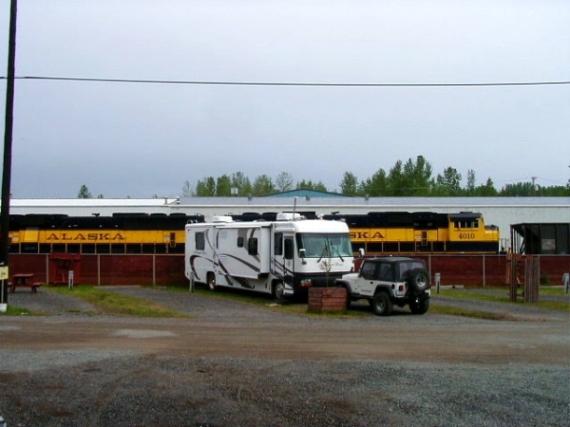