Howdy Troops!   Well, here we are in Temple, Texas, after a rigorous 2-day stint at "Rancho Insecta" with our friends, Art and Kathy Iglesias.   They have a very nice ranch in Johnson City, Texas, about 50 miles north of San Antonio.   The 50-mile drive from San Antonio to Johnson City was pretty much in keeping with our daily travel limit so weren't too exhausted by the time we got there!   Art and Kathy have horses . . . 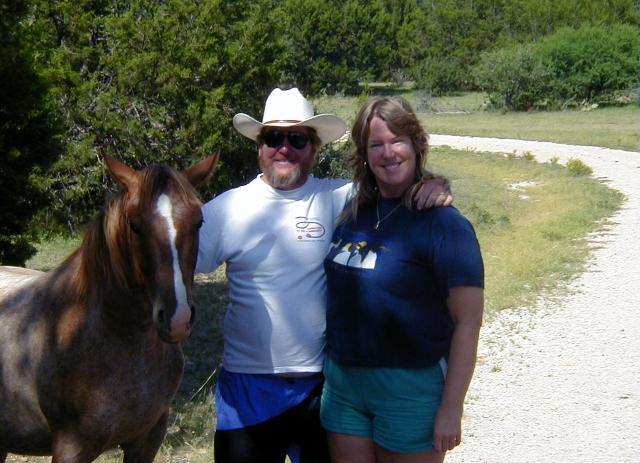 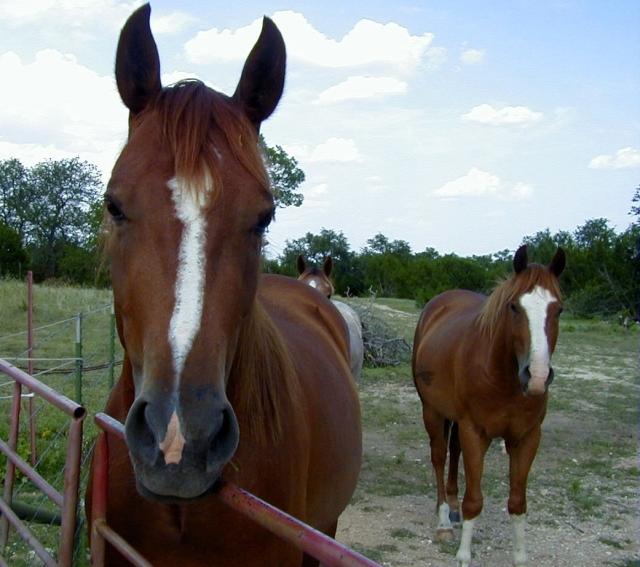 Here's a horse's ass . . . (just kidding, Art!)   We had a thoroughly enjoyable stay and Art and Kathy proved to be exceptional hosts.   Thanks again, guys!!   Our first night proved memorable from the outset with our introduction to Roscoe the Racoon who believed himself to be a cat and nearly ended up in the house at the tail end of Art and Kathy's "herd" of felines which they round up each evening prior to lights out.   Art had us park our motorhome in a very nice location on top of an ant nest and we found ourselves inundated by the creepy crawlers when we went to bed that night.   It wasn't until daylight that we realized that the crawly feeling we both had all night was ants and not simply our imagination!   Fortunately, Art and Kathy were preparted for ant invasions and provided us with some ant spray to kill the little beasties . . . in the morning!   It made for an interesting night though!   We had a wonderful breakfast which was only mildly interrupted by the discovery of a scorpion under the kitchen table!   Art claims that these things never come out during the day . . . so much for his credibility  (we found another one in the same place that evening).   After breakfast we were enjoying coffee and the morning breeze on their front porch.   Unfortunately disaster reared its ugly head once more in the form of an Africanized Bee (Killer Bee) which chased us off the porch and back into the shelter of the house (the house proved safer because we only had slow moving scorpions to contend with instead of supercharged pissed-off Killer Bees).   We moved our motorhome off the ant hill and alongside the barn which made the next night a lot less interesting in terms of wildlife interaction.   We only had a handful of fire ants to contend with which proved to be a pushover after our previous night with the near-invisible biting black ants.   We had intended to stay several days in Art’s "Wild Kingdom" but the combination of cats, horses, hay and native grasses overwhelmed my breathing apparatus and we had to bid "Rancho Insecta" a fond adieu on the morning of the third day.   Art tried to talk us into a horse auction in a nearby town but I now believe he was trying to kill me off and claim a piece of my life insurance!   Here we are with “Lightning” . . . 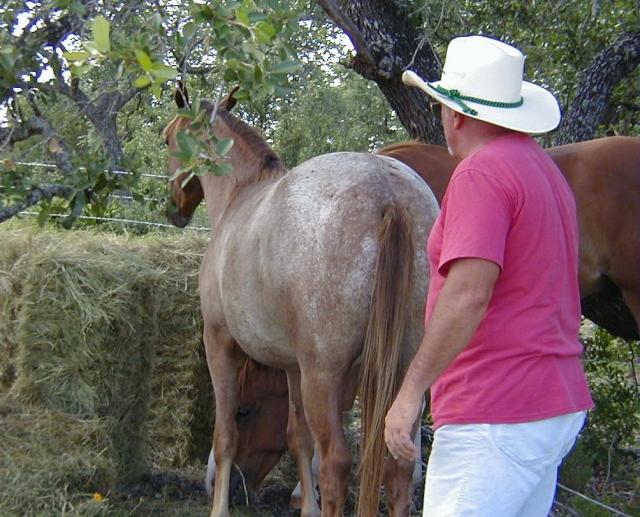