And then it was over Highway 299 to the California coast and north into Brookings, Oregon, home of the annual Southern Oregon Kite Festival . . . 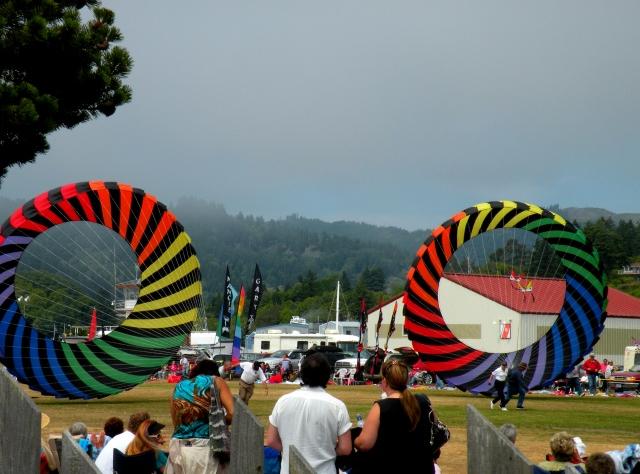 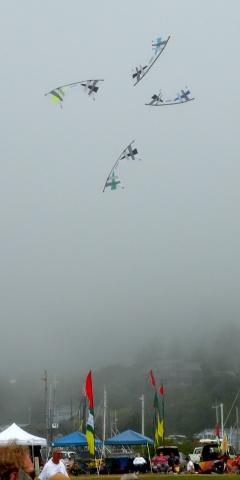 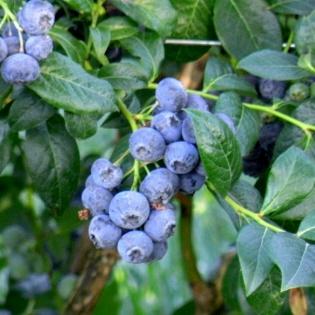 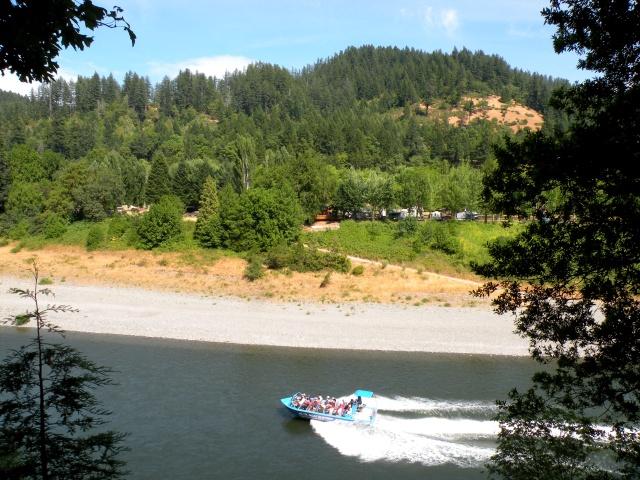 This may appear to be the virtual picture of serenity but just beneath the surface lays a gut wrenching fear as I’m standing there in the ocean holding on to those kite lines and thinking, “Most shark attacks occur in less than 3 feet of water.”   I am under contract to include, at this interval in my ramblings, some room for my budding nature photographer to exhibit her most recent flora, fauna and seascape photos . . . 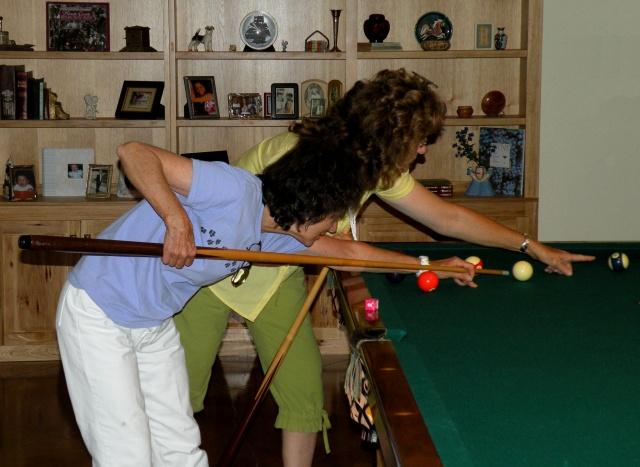 Many of the nature shots she has taken we have happened upon during our morning walks.   These once enjoyable morning strolls have morphed into something resembling the Bataan death march as we have been walking farther, faster, steeper and deeper into the wilderness in an effort to stave off the impending consequence of lives spent in the pursuit of red wine and chocolate.   Last month I was ragging on the good people of Mendocino County, California, for their dedication to the bizarre but methinks they are somewhat lacking when compared to the coastal communities of Oregon . . . 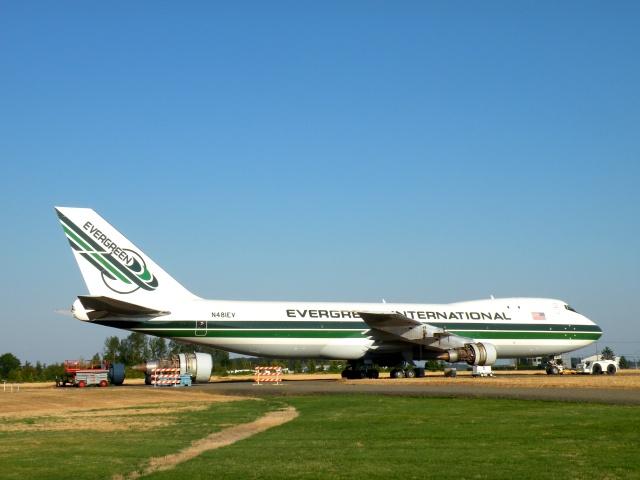 These boats haul passengers 100 miles or more up the river in water that is often only a few inches deep, through steep canyons you can easily touch on both sides of the boat and at speeds approaching 500 miles per hour…almost. 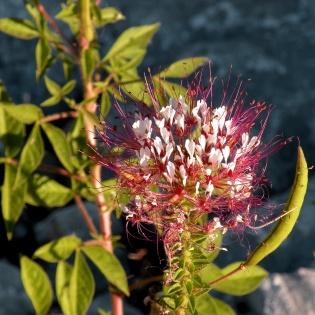 Pretty spooky, huh?!   Continuing north on I-5 we swung by Lake California for a week of mooching meals from our friend, Flo . . .

These kites are called “quads” and are each handled by a different flyer.   It is absolutely fascinating to watch them maneuver around the sky in an aerobatic routine in time with music . . . 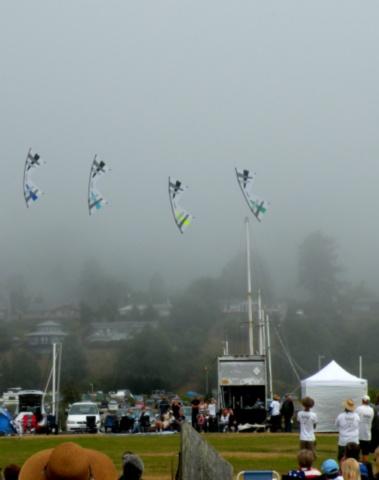 That “deer in the headlights” look was our clue that a white squall lay just ahead.  It is unclear which team actually won the game or the precise amount of wine consumed during play although we did carry out 31 empty bottles in the morning as well as one of the neighbors we discovered asleep on the top shelf of the pantry.   It is only my abiding and steadfast loyalty to a friend and the code of omerta which precludes me from revealing the identity of our pantry puppy . . . it was Keith.   Having adapted to the idea of living rent free on the Fly Farm and squandering the in-law’s electricity and water on such frivolities as daily showers and charging both our electric tooth brushes at the same time, we began noticing little things that led us to believe the Zimmerman’s did not share in our euphoria.  Dinner became somewhat like a moveable feast with us always appearing just after they had eaten and were in mid table clearing activities, regardless of how early in the afternoon or late morning we arrived.  Then Sandy began embroidering samplers containing cute little sayings such as, “Company is like fish, after 3 days it stinks” and “Don’t confuse our endurance with hospitality” and “Don’t go away mad, just go away.”   And so, with great reluctance and sadness we packed up our urban assault vehicle, dumped our holding tanks in Sandy’s vegetable garden and left a pair of cheering high-fiving in-laws in our rearview mirrors.

We stopped at the Elks Lodge in Chico, Ca for a couple of days to deal with the anxiety we were experiencing due to our eviction from the “entitled class” and at the thought of having to once more pay our own way in life when we came upon a rather peculiar looking person at one of the nearby Elks Lodges . . .

These guys were lucky that the wind was light that day or they may very well have found themselves in Nevada.   Although we saw a lot of kites being flown with any number of strings and multiple flyers, kiting is mostly about those handmade creations which are flown by one flyer using one string . . .

This endeavor was prompted by the increasing number of “visits” by both the Environmental Protection Agency and Internal Revenue Agents whom were becoming ever more curious regarding rumors of vast quantities of Zim’s Zany Zin and Barebones Red being produced and stored on the property.  After several nights of clandestinely moving the barrels from above ground storage to the newly created underground facility, we finally racked the last of several hundred barrels . . .

It sure is amazing how wine has become the primary constant throughout the last few Updates.   My bride, of course, is entirely to blame for this anomaly.   That’s about it for this time but we’ll be heading back to the coast tomorrow and then on to Washington’s Olympic Peninsula and eventually Friday Harbor.   My brother-in-law pays us to visit there occasionally and annoy his ex-wife while she pays us to stay away.  Fair warning Joan, this year he was the high bidder so we’ll be arriving on your doorstep August 12 for a short visit.   We will provide the always popular green bean casserole for Thanksgiving dinner but will need to know where on the island we can rent formal attire for your New Year’s Eve gala, unless it will be held in the nude again this year.   An e-mail will be forthcoming outlining our dietary requirements and preferences in soap, shampoo, towels and bed linen.   Hugs!! Chuck and Kalyn 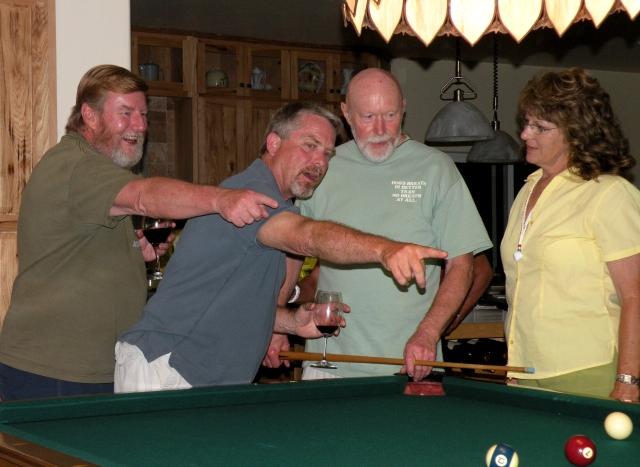 Evergreen is home to the Spruce Goose, the wooden aircraft constructed by Howard Hughes and flown only once in Long Beach harbor in 1947.   The hangar containing the plane was closed on the day of our visit so we were unable to get any pictures of the actual aircraft but we’ve included the next best thing . . . 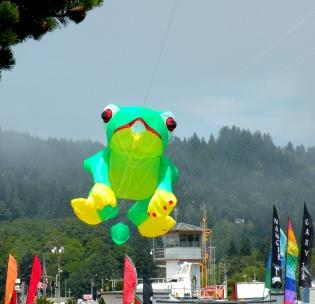 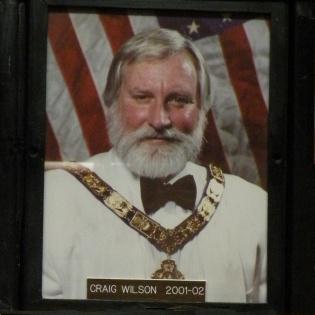 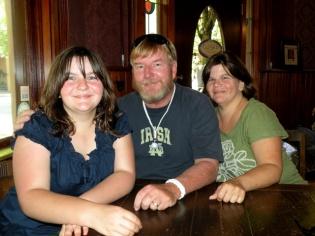 In addition to the great scenery and abundance of wildlife encountered, the pilots are somewhat gregarious and never miss the opportunity to swoop in and splash swimmers or engage in a water fight with another boat.  Those swimming on the river have become accustomed to the boats and are usually armed with some kind of water cannon for self defense.   With temperatures in the canyon hovering in the 90’s, the occasional cooling spray of a water cannon is a treat you actually look forward to.  A word of warning: carry a plastic bag for your camera!   We have taken a brief hiatus from our cool coastal climes and are now enjoying the warmer inland temperatures around McMinnville, OR and visits with our nieces and nephew and their respective clans . . . 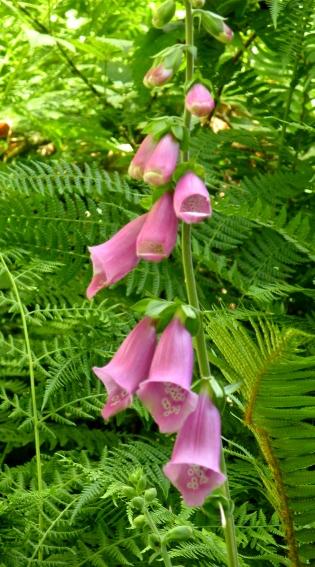 When traveling the Oregon coast there is one stop that you absolutely must include: the jet boats of the Rogue River . . .

Charlie’s arrival was the signal for the other flyers to break out the larger, more whimsical
creations . . . 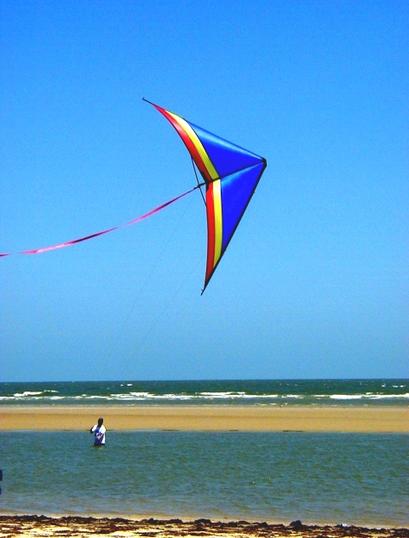 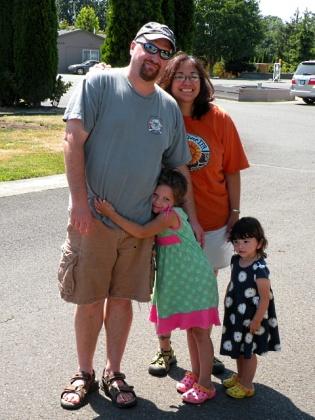 It generally required a combined effort of 2 or more of the girls to determine which ball was next in rotation and which pocket would be easiest to hit.   Our team had considered protesting this procedure as a technical violation of the rules but we, too, were haunted by our own albatross who required endless assistance in determining the next ball, locating the pocket, calculating the proper angle of the shot and distinguishing the pool table from the kitchen table . . .

Kite flying is one of those things that we usually take up in childhood but is somehow lost in our race toward elderhood (I love that word!) but the folks sponsoring the Kite Festival always have time to include kids from the audience in some fun time with “The Cat in the Hat” . . .

In short order the skies were filled with a variety of critters!    And before long it became evident that “size does matter” even in kiting . . . 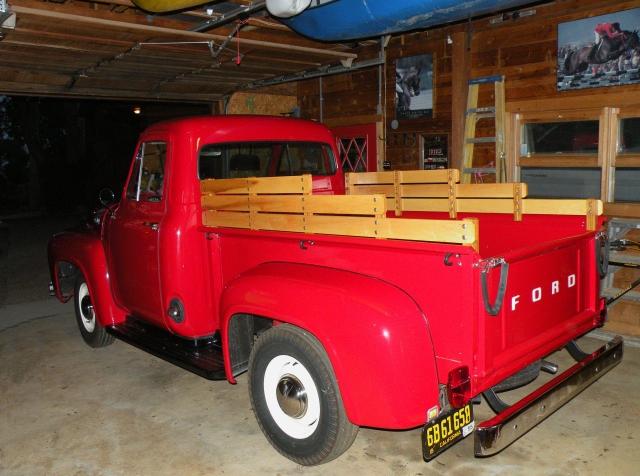 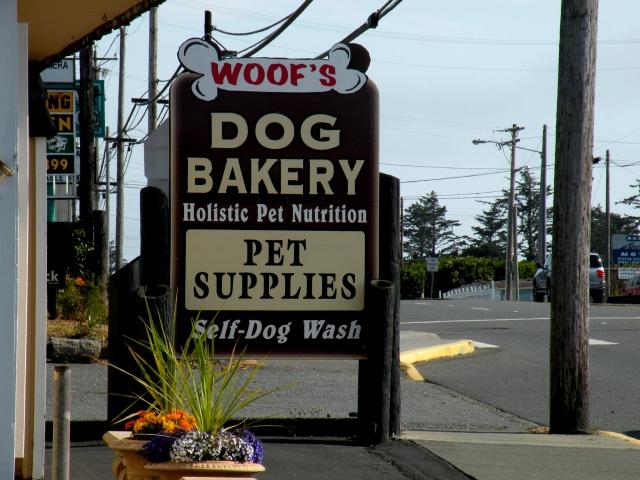 If you look to the lower right of the second frame you can see the four person team, “iQuad,” who are among the best flyers in the country.   Each of these kites is controlled by 4 lines held by one person and, somehow, they never get tangled as they race through the sky perfectly choreographed to various musical pieces.   You may have noticed that it was somewhat foggy on the day of the festival but that sure didn’t dampen any spirits or hinder the enjoyment of the event.  Even Charlie Chaplin put in an appearance and performed a comedic musical routine with a kite that watched his every move . . . 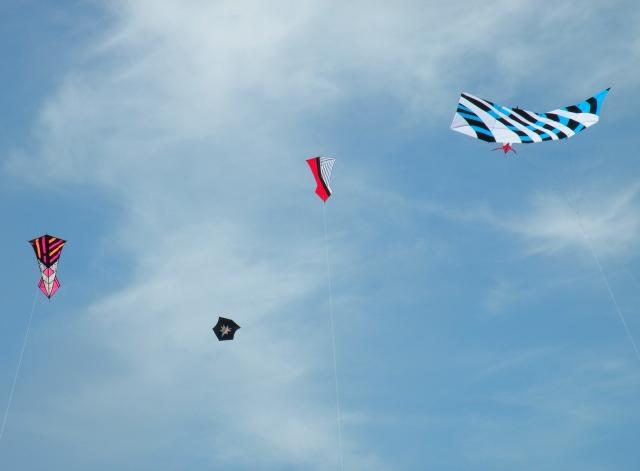 Our last few days at the Zimmerman Fly Farm were spent excavating a subterranean wine cellar directly beneath the above ground model and cleverly concealing the entrance in the bed of an old Ford pickup...

The brother-in-law didn’t tell them he had been dumping thousands of gallons of bad wine on the property over a course of some ten years for fear they may test the ground water and he could end up responsible for an environmental catastrophe that would surely eclipse Love Canal!   With only a few cases of store bought wine remaining in the above ground cellar, we invited a few of the neighbors over for a meal and a friendly game of Boys versus Girls pool to provide some appearance of normalcy to thwart the ever vigilant Feds . . . 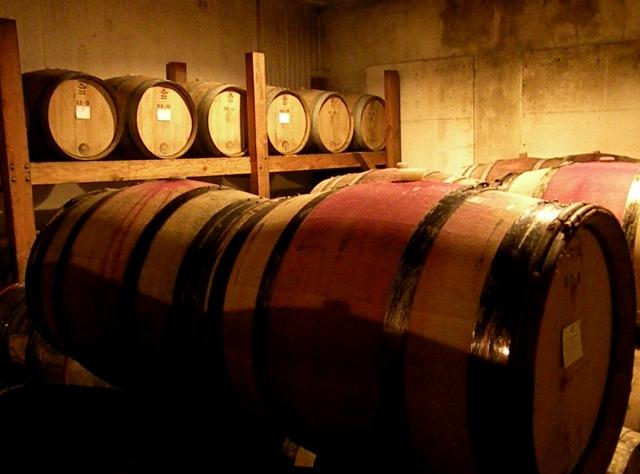 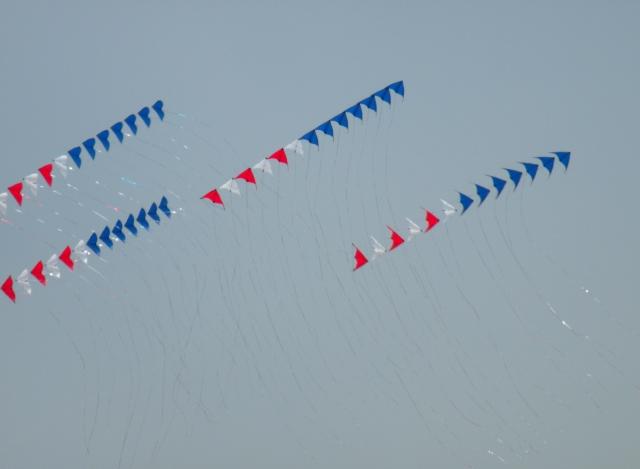 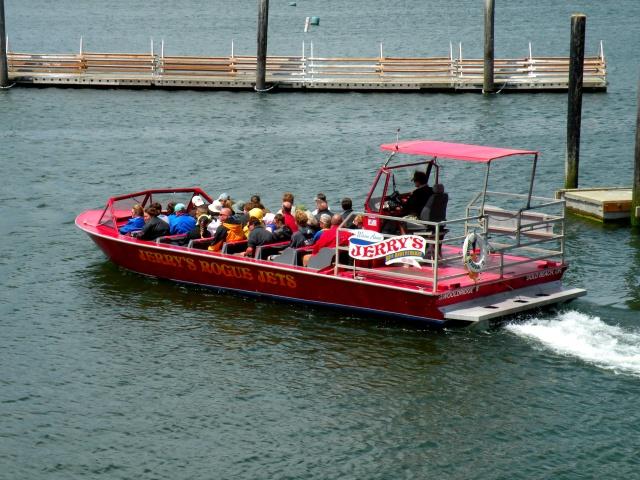 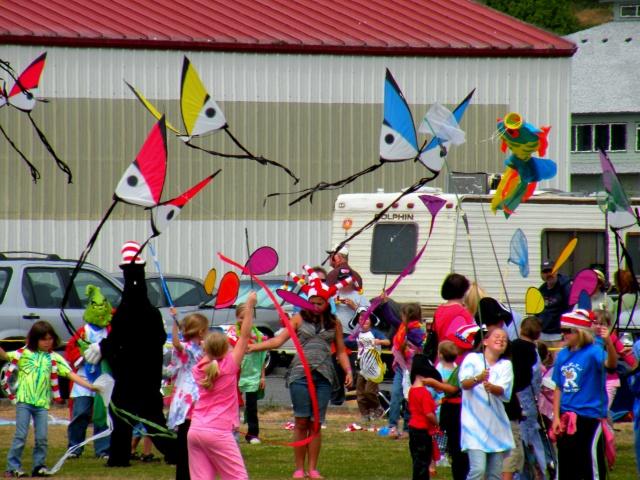 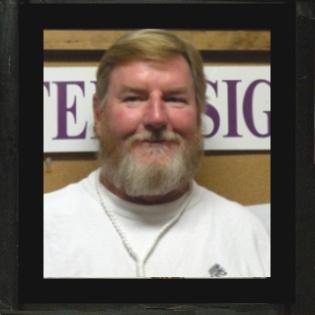 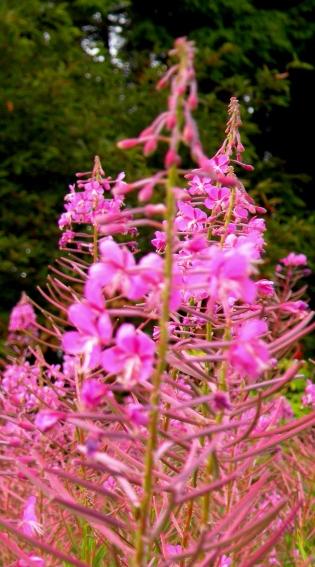 McMinnville is also home to the Evergreen Air and Space Museum . . 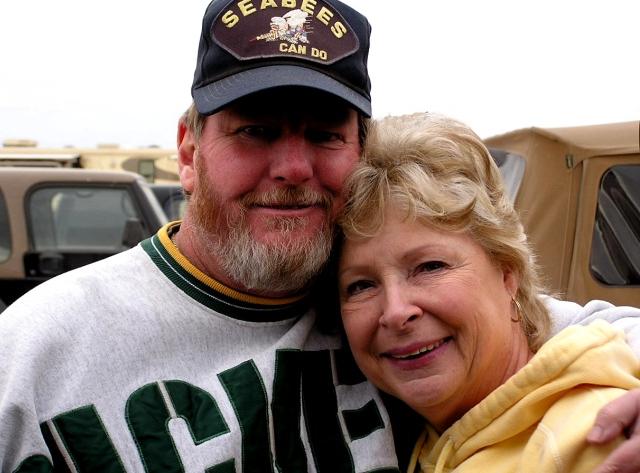 Some kids, of course, simply refuse to ever grow up . . .