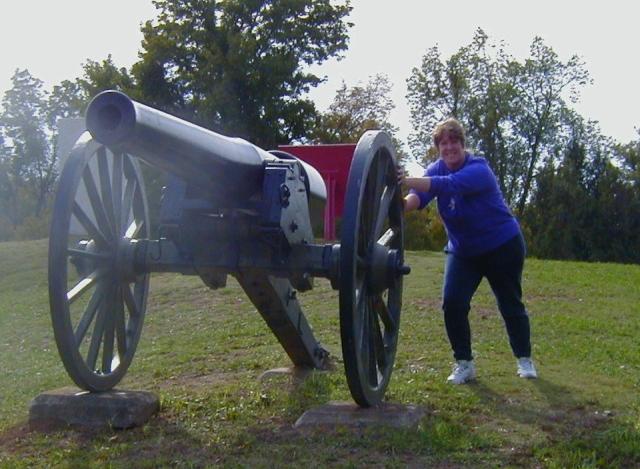 My bride believes that in a former life she was a cannoneer on the Norwegian side during this conflict.   She proudly wears her “Uff-Da” t-shirt whenever we visit one of these sites and I just don’t have the heart to tell her that Norway was not one of the combatants.   On the morning of our second day we awoke to a refrigerator that was  sitting at 70 degrees and a freezer full of rancid meat and putrid fish.  This marks the fifth catastrophic failure of our fourth French manufactured Dometic refrigerator in only 6 years!   I am beginning to believe that liberating the entirety of France during WW2 may have been a mistake and that we should have allowed the Germans to keep the refrigeration sector of the country...and the bathroom facilities in Paris.  As usual, this event occurred on a weekend when most RV repair shops are closed.   After several fruitless hours on the phone attempting to find a repair facility, we packed up and headed down to Winchester, Virginia, and a Camping World store that happened to have a repairman available.   It took about 10 minutes for him to determine that the cooling unit had failed . . . AGAIN . . . and it would take 7 to 10 days to get another one.   RATSPIT!!!   My ever resourceful traveling companion called the shop in Red Bay, Alabama, that had repaired/replaced our refrigerators in the past and was told they had one in stock (the entire refrigerator) which they would gladly install whenever we got there.   After a grueling 2 days of travel, about 950 miles, it took about 2 hours, and $4300, to remove the old refrigerator and install the new one . . . 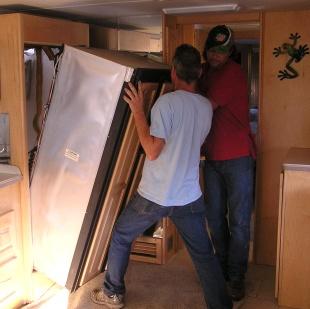 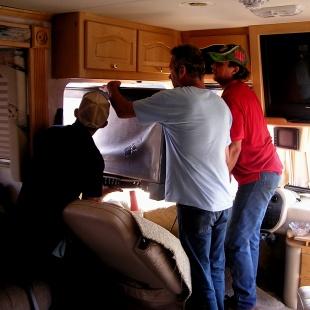 It just seems like déjà vu all over again.   I realize that sufficient time has yet to pass to allow you to recover from the doldrums inflicted by our previous missive but if I don’t get this stuff down on paper, so to speak, while I am still in a relatively decent frame of mind, I just may explode!!   There we were, cruising along with not a care in the world, through the farmlands of western Pennsylvania and Maryland.   We holed up at the Hagerstown Elks Lodge with the intention of hanging out for a few days and spending some time at the Antietam Battlefield from the War of Northern Aggression  (for those of you who are “damn Yankees,” I am referring to the Civil War) . . 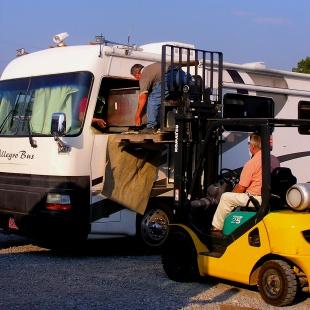 I have yet to figure out how they got into a car without the luxury of door handles and have a mental image of Elvis standing on the running board with his guitar hanging onto the doorframe.  The Tupelo Hardware store, where Elvis bought his first guitar in 1946, is still up and running (he actually wanted a .22 rifle but his mother was afraid he’d “shoot his eye out”  and wouldn’t allow it.  THANKS, MOM!!!!!) . . . 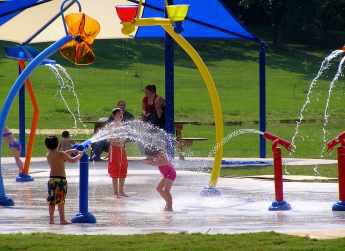 As is common with all of the French made equipment in our RV, fresh out of the crate it didn’t work.   A defective gas igniter was discovered and replaced and we headed over to the campground and waited for it to cool down enough to fill with beer (I do have my priorities!).   After waiting 30 hours for it to chill to the nearly drinkable temperature of 50 degrees (this is probably a fine temperature if you happen to be British), we had to return to the shop where another defective part was found and replaced.   It has now been a week since the last incident and all systems seem to be functioning normally.   I spend a great deal of time pacing in front of the damn thing with a loaded and cocked .357 and leaving no doubt what my intentions are if it crosses me just one more time . . .  I have come to believe that these things are possessed by some malevolent entity and have even considered a pre-emptive exorcism.   Now, lest you think that I am being unduly harsh in my opinion of French products: both of our air conditioners are French and both have been replaced at least once; our washer/dryer combo was French and had to be removed after 1 week because it had an irreparable violent vibration when it was in the drying cycle that nearly shook the front wheels off our RV; and our French-made patio awning had to be replaced after a year of occasional use when the internal gearing fell apart.   We are now settled in the campground at the Allegro factory, across the street from the refrigeration shop, waiting to have a few other relatively minor things checked on our RV which we were simply going to ignore until our latest bout of refrigerator problems forced us down here.   As gun-shy as we have become about traveling too far from our neighborhood “Maytag” repairman, we hope it takes them a very long time to make the other repairs.   On a lighter note, we made a cross-border trip to Tupelo, Mississippi . . . 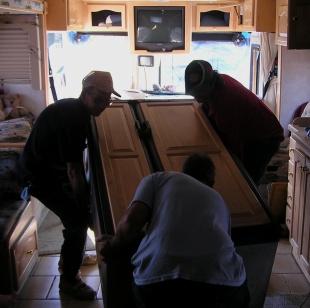 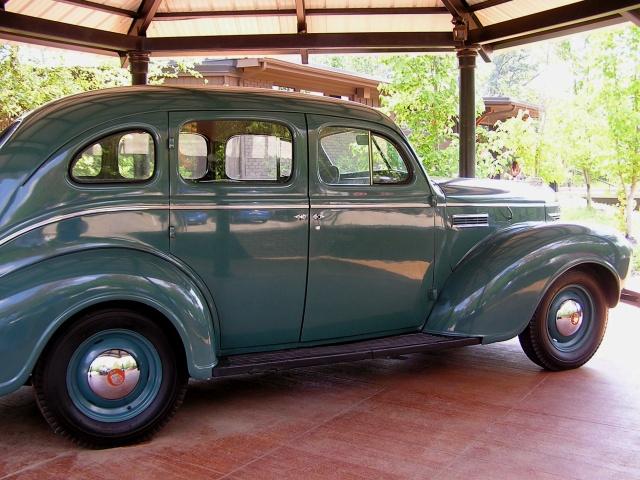 And getting to Tupelo is pretty easy.  You just follow the signs . . .

I apologize for the length and detail of this tirade regarding our ongoing refrigerator problem, but many of those who read our website are referred here from numerous other websites geared toward RV’ing and full time travel so this information may be helpful to some of them.   We’ll get back to the travel aspect in our next installment…errr…hopefully…remember that we STILL have a French refrigerator.   See y’all in the next episode of, “Tales from the Crypt: The Parisian Icemaker” when we finally hit the road again!   Hugs!!   Chuck and Zookie

They’ve made a few changes since we were last there about 4 years back including a park and museum.   They even managed to come up with a replica of the 1939 Plymouth which the Presley family used for their move to Nashville . . . 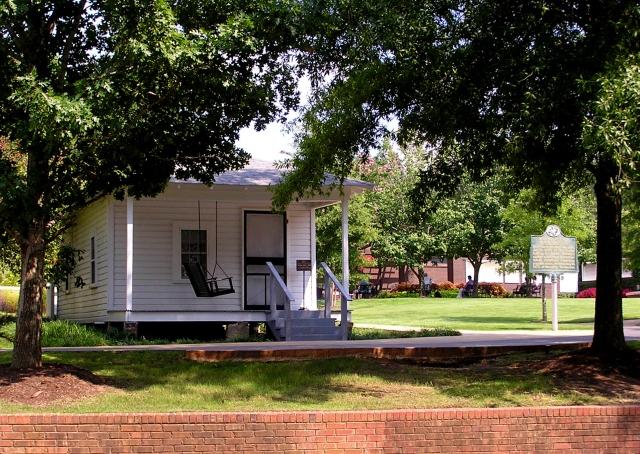 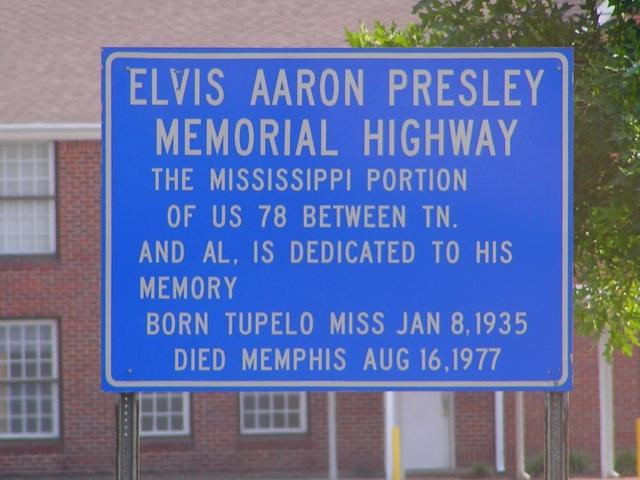 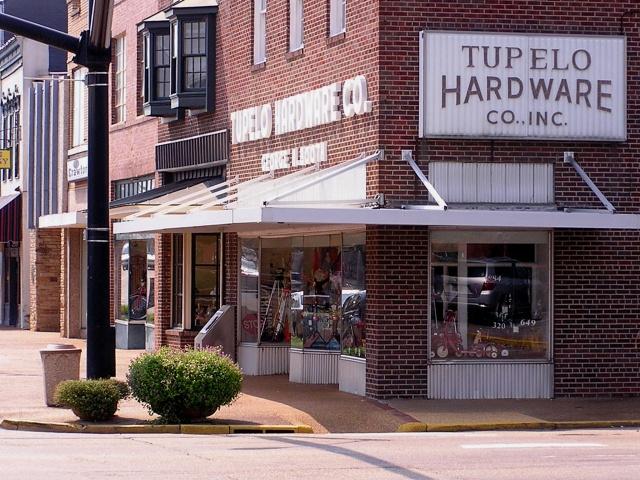