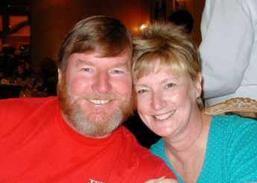 Ruthann asked me to read this passage from "The Velveteen Rabbit" at her wedding some 10 years past.  She told me that the Skin Horse reminded her of Michael with his hair rubbed off from all of the love and attention.  I don't know if that's really what happened to Mike, I think he just woke up one morning and found that most of his hair had gone missing, but it was the way she thought about him and how very much she loved and respected him.  But this passage also provides a window into the person she was.  She was a loving, thoughtful and gentle soul; always ready to do whatever was asked of her by a friend, or a brother and she was always eager to turn a new acquaintance into a lifelong friendship.  She was both gregarious and mischievious and a willing traveler in my strange world of humor.  She was real!

But beyond what is commonly known about Ruthann, she had a dark side that could only be appreciated by an older brother:  Ruthann was a rotten kid!  She and I were raised in Darby, Pennsylvania, a small town just outside Philadelphia.  Today it is an area that is unsafe to walk through during daylight hours and a place that sane people avoid altogether after dark.  It was, however, a very nice place to grow up some 50 years ago.  Our mother, Ruthann and I moved in with our grandfather in Darby when she was about two years old.   Grandpop was a house painter, who rarely worked and was always available and eager to look after us kids while our mother worked as a welder in an aircraft factory.

Prior to Ruthann's arrival in this world, I pretty much had everything going my way.  And then, one chilly winter morning, this smelly screaming shriveled pink stranger mysteriously appeared and my life hasn't been the same since.   Not long after learning to talk, she learned the fine art of stoolpidgeonry and soon became an accomplished rat fink!  She would take fiendish delight in ratting on me at every opportunity and she was especially talented at placing me in harm's way when I had nowhere to run.  Usually, while we were both riding in the back of Mom's old Plymouth, I would be "minding my own business" when she would suddenly start screaming, "Mom, Chuckie's touching me!"  The usual reaction from Mom would be to turn around in the front seat, whack me in the head and tell me, "Stop touching your sister!"  Ruthann would stop screaming, peace had been restored and the journey would continue . . . until, a short time later, "Mom, Chuckie's looking at me!"  Turn.  Whack!  "Stop looking at your sister!"  Screaming ends.  Reace restored.  Journey continues.  And then . . . out came the tongue.  Ruthann was a rotten kid!!

I somehow managed to survive those early years and soon found myself the victim of an unscrupulous teenage blackmailer.  She would demand rides in my car in exchange for not ratting me out!   I somehow overcame my little sister's "formative" years, grew to adulthood, found a girlfriend whom she didn't completely terrorize and frighten, had a family and eventually became the coach of my son's soccer team.  At the end of one season, while arranging a team pizza party at Chuck E. Cheese, I was told that we would be welcome to use their Chuck E. Cheese costume if we could provide someone to wear it.  One person immediately came to mind . . .

At first she refused, then she reconsidered, finally she relented and grudgingly agreed to play the part.  When she appeared at our table, attired in her furry finest, the four-year old little sister of one of my soccer players looked at me with wide eyes and said, "Mr. Bryan, that's a BIG rat!"  My reply was simply, "I know."  Ruthann spent the rest of the afternoon waddling through the restaurant with small children holding her "tail" as if it were the train of a formal wedding gown.  She not only entertained our kids but spent the next couple of hours amusing every child who walked through the door.  At the end of the day she reluctantly gave up the costume but enthusiastically volunteered if we ever had need of another rat!  I now realize that she had been training for just that day her entire life!

Ruthann loved to travel and New Orleans was one of her favorite destinations.  Through the years, we made several expeditions together to "The Big Easy" with her last visit being over Thanksgiving in November of 2001.  She and Mike joined Kalyn and I for a week of cultural exploration within the confines of the French Quarter and occasional stops at Pat O'Briens to inquire about "Hurricane" activity.   Ruthann, a big fan of Anne Rice and "creatures of the night" in general, dragged Kalyn, Mike and me on an after dark tour of the city's more notorious vampire hangouts.  Fortunately, other than our guide, dressed to resemble Count Dracula, we encountered no other supernatural creatures throughout the evening.

During one of our previous visits, we were attempting to clean out one of the local oyster bars during a 10 cent special on the tasty crustaceans.  We made two rather startling discoveries on that occasion:  I'm allergic to oysters and Ruthann didn't know they were still alive when you ate them.  Our oyster shucker, a very large black man named Tony, would rap the wooden end of his shucking tool on each of the shells before opening it.  He would then pass us a tray full of opened oysters, which we would goop up with cocktail sauce and wolf down just in time for the arrival of the next tray full.  After some time, Ruthann became curious and asked Tony why he rapped each oyster before opening it.  His reply, in a very deep southern drawl was, "Dat's da way Ah checks to be shuah dey be alive."  Ruthie's eyes opened to the size of saucers, she stopped chewing and said, "Dey be alive?"   "Oh yes, Ma'am" came the reply.  "If I open up a dead'un, it'd stink up da whole place."  Up to her mouth went the napkin, out came the oyster and, to my knowledge, she NEVER ate another one.

Yes, my life was never the same after her arrival and I doubt that it will ever be the same now that she's gone.  I loved my little sister, but more importantly, I know that she loved me.

The Skin Horse had lived longer in the nursey than any of
the others.  He was so old that his brown coat was bald in patches
and showed the seams underneath, and most of the hairs in his
tail had been pulled out to string bead necklaces.   He was wise,
for he had seen a long succession of mechanical toys arrive to
boast and swagger, and by-and-by break their mainsprings and
pass away.  He knew that they were only toys, and would never
turn into anything else.  For the nursery magic is very strange and
wonderful, and only those playthings that are old and wise and
experienced like the Skin horse understand all about it.
"What is real?"  asked the Rabbit one day.  "Does it mean
having things that buzz inside you and a stick-out handle?"
"Real isn't how you are made," said the Skin Horse.  "It's a
thing that happens to you.   When a child loves you for a long,
long time, not just to play with, but REALLY loves you, then you
become Real."
"Does it hurt?"
"Sometimes."  For he was always truthful.  "When you are Real
you don't mind being hurt."
"Does it happen all at once, like being wound up, or bit by bit?"
"It doesn't happen all at once.  You become.  It takes a long time.
That's why it doesn't happen to people who break easily, or who
have sharp edges, or who have to be carefully kept.  Generally, by
the time you are Real, most of your hair has been loved off, and
your eyes drop out and you get loose joints and very shabby.
"But these things don't matter at all, because once you are Real
you can't be ugly, except to people who don't understand."
"I suppose you are Real?"   And then he wished he had not said
it, for he thought the Skin Horse might be sensitive.  But the Skin
Horse only smiled.
"The Boy's Uncle made me Real.  That was a great many years
ago; but once you are Real you can't become unreal again.  It lasts
for always."
(from The Velveteen Rabbit by Margery Williams)